Did Woman in Swastika Shirt Give Nazi Salute at Trump Rally?

Some elements of this photograph are genuine, but it has little to do with Trump. 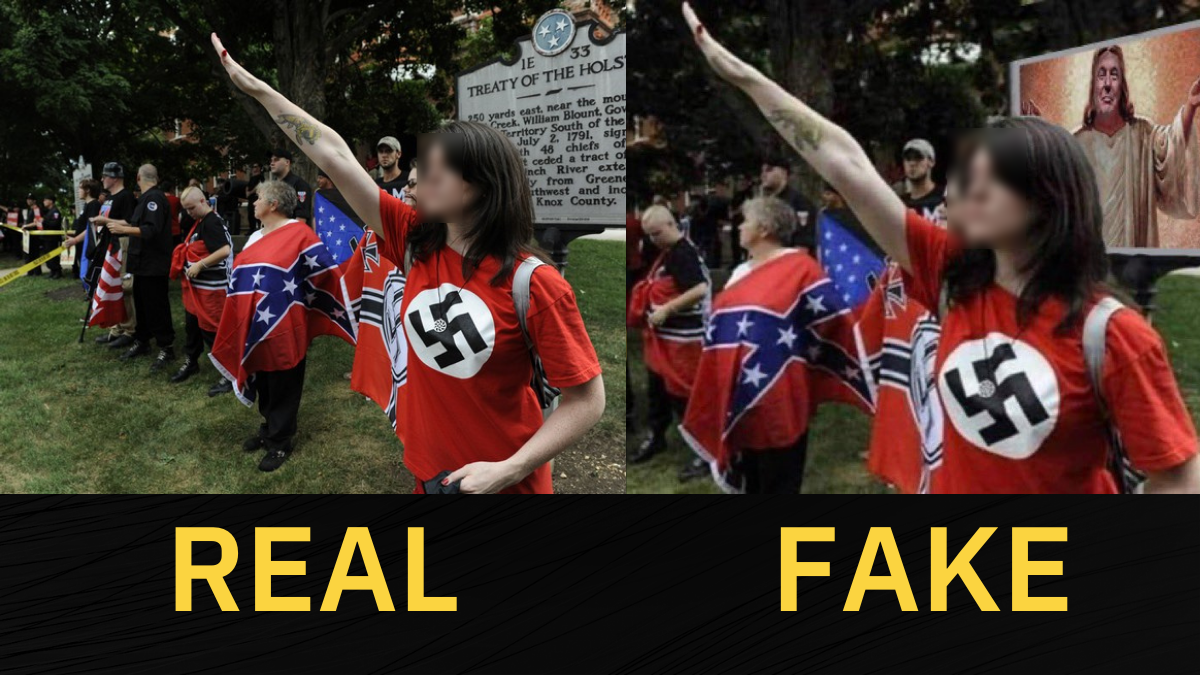 Claim:
A photograph shows a woman in a shirt bearing a swastika giving a Nazi salute in front of a Jesus-esque portrait of former U.S. President Donald Trump at a political rally.
Rating:

In April 2022, in the days following a rally for former U.S. President Donald Trump in Michigan, a doctored picture was circulated on social media that supposedly showed a woman in a swastika shirt giving a Nazi salute in front of a Jesus-esque portrait of Trump: This is not a genuine photograph of a woman giving a Nazi salute at a Trump rally. At least one major aspect of this image has been digitally manipulated, and the source image for this digital fakery is several years old.

The edited image shown above was created by altering a photograph taken in August 2010 at a neo-Nazi rally in Knoxville, Tennessee. In the original photograph, the woman in the swastika shirt is standing in front of a historical marker commemorating the Treaty of the Holston, not a portrait of Trump reimagined as a Christ-like figure.

While we haven't been able to determine the exact source of this specific image, we can say with certainty that it was taken in Knoxville, Tennessee, in August 2010.

The sign in the background of the original photograph is for a historical marker in Knoxville, Tennessee. On Aug. 14, 2010, about 50 members of the National Socialist Movement marched at this location carrying Nazi signs. We have found several additional photographs of this woman on Flickr that show her in a Nazi shirt and holding a white pride flag in front of this marker.

Reuters reported that she can also be seen in a video of this neo-Nazi rally from the Knoxville News Sentinel.

Here's an excerpt from Inside of Knoxville's 2010 report on the neo-Nazi rally:

An announcement was made several weeks ago that a permit had been issued for a KKK and neo-Nazi march in Knoxville. The spokesperson for the group when the story broke was from Detroit and it appeared Knoxville was chosen in hopes a receptive audience might be found to the anti-immigration focus of the rally. Debate began immediately about how free speech should be when it is hate speech. A discussion followed among many groups regarding an appropriate response. Some advocated ignoring the protesters, contending that they want attention and if they don’t get it, they will go away. Others pointed out that they seem to not return to places where they are clearly not welcome and that large crowds should be on hand to ridicule the protesters.

There is no way to know how many people stayed home to pointedly ignore them, but large numbers of people came downtown to ridicule them and let them know they are not welcome in Knoxville.