Were Children Once Sent Through the U.S. Mail?

Children did not come within the classification of harmless live animals which do not require food or water while in transit. 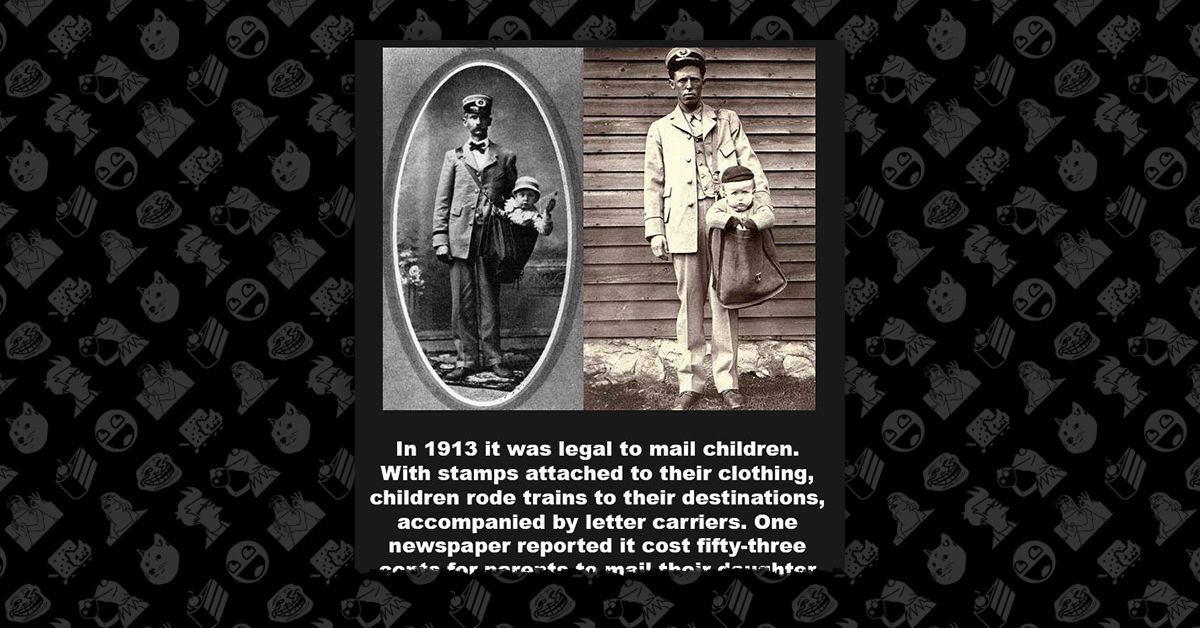 Although the sending and delivery of packages has long since become a facet of everyday life, with not just the U.S. Postal Service but also private companies such as UPS, FedEx, and OnTrac engaging in that service, it was not until 1913 that the U.S. Post Office introduced a Parcel Post service for the handling of mail too heavy for normal letter post. As of 1 January 1913, Americans could send packages weighing up to eleven pounds through the Post Office, a service that proved a boon to business, as farmers, manufacturers, and retailers could now ship many of their products directly to consumers' homes.

In the early years of Parcel Post service, before the U.S. Post Office implemented more specific regulations, people shipped all sorts of unusual things by mail — including, as suggested below, babies and small children:

In 1913 it was legal to mail children. With stamps attached to their clothing, children rode trains to their destinations, accompanied by letter carriers. One newspaper reported it cost fifty-three cents for parents to mail their daughter to her grandparents for a family visit. As news stories and photos popped up around the country, it didn't take long to get a law on the books making it illegal to send children through the mail. However, it was neither a regular occurrence nor a routine aspect of the Parcel Post service for people to wrap up children, slap some stamps on them, and ship them cross-country — the few documented examples of children being sent through the mail were nearly all publicity stunts, instances of people who knew the postal workers in their area asking them to carry their babies a relatively short distance along their routes to some nearby relatives, or cases in which children were listed as 'mail' so they could travel on trains without the necessity for purchasing a ticket.

As early as 17 January 1913, just a few weeks after the introduction of the Parcel Post service, the New York Times reported that the Postmaster General was considering (humorously or otherwise) the propriety of sending infants through the mail and noting that postal regulations did not allow for it:

The mailing of babies by parcel post is a real infant industry which Postmaster General Hitchcock is asked to foster.In the circumstances of his bachelorhood Mr. Hitchcock is considering seriously the calling into consultation of experts in the transportation of babies, as a letter which he received to-day presents to him a mail problem with which he is quite unfamiliar. To add to his embarrassment the letter contains a note of genuine pathos, which appeals strongly to the Postmaster General. This is the letter, identically as it was phrased and punctuated:

Fort McPherson, Ga.
Postmaster General,
Washington, D.C. — Sir: I have been corresponding with a party in Pa about getting a baby to rais (our home being without One.) May I ask you what specifications to use in wrapping so it (baby) would comply with regulations and be allowed shipment by parcel post as the express co are to rough in handling.

The name signed to the letter is withheld at the request of Mr. Hitchcock.

As babies, in the opinion of the Postmaster General, do not fall within the category of bees and bugs — the only live things that may be transported by mail — he is apprehensive that he may not be of assistance to his correspondent.

Nonetheless, two weeks later the Times reported that a mail carrier in Batavia, Ohio, had delivered a baby sent by his parents to a grandmother who lived about a mile away:

Vernon O. Lytle, mail carrier on rural route No. 5, is the first man to accept and deliver under parcel post conditions a live baby. The baby, a boy weighing 10-3/4 pounds, just within the 11 pound weight limit, is the child of Mr. and Mrs. Jesse Beagle of Glen Este. The boy was well wrapped and ready for "mailing" when the carrier received him to-day. Mr. Lytle delivered the boy safely at the address on the card attached, that of the boy's grandmother, Mrs. Louis Beagle, who lives about a mile distant. The postage was fifteen cents and the parcel was insured for $50.

And a year later, the Times reported a similar instance of a small boy's being shipped by his grandmother from Stratford, Oklahoma, to an aunt in Wellington, Kansas, via Parcel Post:

Mrs. E. H. Staley of this city received her two-year-old nephew by parcel post to-day from his grandmother in Stratford, Okla., where he had been left for a visit three weeks ago.The boy wore a tag about his neck showing it had cost 18 cents to send him through the mails. He was transported 25 miles by rural route before reaching the railroad. He rode with the mail clerks, shared his lunch with them and arrived here in good condition.

Several other instances of children being transported by Parcel Post were reported in the press over the next few years before the Post Office finally clamped down on such occurrences for good, with the Times reporting that:

Children may not be transported as parcel post, First Assistant Postmaster General Koons has ruled in passing upon two applications received at the Washington City Post Office for the transportation of children through the mails.Mr. Koons said children did not come within the classification of harmless live animals which do not require food or water while in transit.

One of the applications received by the local Postmaster was from a 9-year-old girl, who entered the main Post Office and asked that she be sent to Kentucky.

Neither of the photographs displayed above has any connection to a real-life case of a child being sent via U.S. mail, however. They're both simply vintage cute posed humor shots taken from a collection of historic Smithsonian Institution (SI) photographs uploaded to Flickr, the image on the right being described by the Smithsonian as by far the most popular photograph from the Institution in that collection. As the author of an SI article about that image wrote in 2009:

Clearly, many were startled and amazed by this photo of a postal carrier with a child in his mail bag, and so for some clarification, I spoke to Nancy Pope, historian at the National Postal Museum. She reiterated the information from the Flickr caption for this photograph: first, that this photo was actually a staged piece, and second, that there is little evidence that babies were sent through the mail other than in two known cases in which children were placed on train cars as "freight mail" as this was cheaper than buying them a regular train ticket.However the services may have been (mis)interpreted during this era, these stories point out that mail service was particularly important during a time when travel was difficult and cost-prohibitive for many Americans. But perhaps more interestingly, they indicate that the mail carrier was considered a crucial part of communities — a touchstone with family and friends far away from each other, a bearer of important news and goods. In some ways, Americans trusted their postmen with their lives (and in the cases mentioned above, with their babies!).