Abortion-rights activists responded with outrage to a footnote from the draft opinion overturning Roe v. Wade. What it actually said was very different. 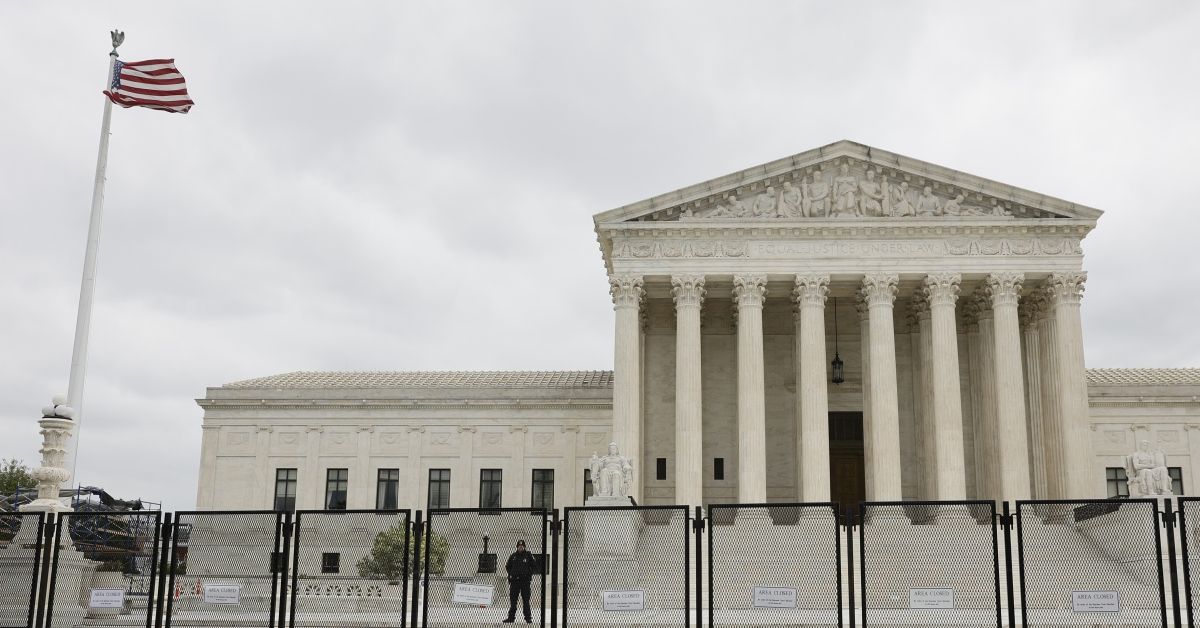 Claim:
In a leaked majority opinion overturning Roe v. Wade, conservative Supreme Court justices argued that abortion should be banned or restricted in order to boost the "domestic supply of infants" for adoption.
Rating:

In May 2022, as abortion-rights and anti-abortion activists digested and responded to a leaked majority Supreme Court opinion overturning Roe v. Wade, attention turned to what some presented as a callous and inhumane argument for the restriction or prohibition of abortion access in the United States.

BREAKING: In a brief re abortion, Supreme court Justices Amy Coney Barrett/Alito's Draft, said US needs a “domestic supply of infants” to meet needs of parents seeking to adopt — that those who would otherwise abort must be made to carry to term — giving children up for adoption. Conservative Supreme Court Justice Barrett, wrote a brief about abortion. She noted the USA needed a “domestic supply of infants” to meet needs of parents seeking infants to adopt. She argued that mothers must birth their baby & give it up for adoption to meet market demands.

When a Supreme Court Justice writes that abortion should be outlawed for the purpose of generating an increased “domestic supply of infants” to meet needs of parents seeking infants to adopt, we aren’t exaggerating by stating that they want you to be brood mares for the state.

These tweets grossly misrepresented, or fundamentally misunderstood, the contents, context, and function of a footnote from the leaked draft opinion. None of the justices, including Samuel Alito and Amy Coney Barrett, made the argument that abortion should be banned or restricted for the purpose of creating, maintaining, or increasing a "domestic supply of infants." Our rating is therefore "False."

Where Did 'Domestic Supply of Infants' Come From? Supreme Court Justice Samuel Alito is seen after a swearing-in ceremony for Mark Esper to be the new U.S. Secretary of Defense July 23, 2019, in the Oval Office. (Photo by Alex Wong/Getty Images.)

The document whose leaking set off a firestorm in May 2022 was a draft majority opinion, written by Alito, in the case of Dobbs v. Jackson Women's Health Organization, which revolved around Mississippi's 15-week abortion ban.

In it, the majority explicitly overruled Roe and Planned Parenthood v. Casey, a landmark 1992 case in which the court substantially reaffirmed the central hold in Roe, namely that the U.S. Constitution — in particular the Due Process Clause of the 14th Amendment — acknowledges and protects a fundamental (but not absolute) right to an abortion, as part of a broader fundamental right to privacy.

Alito's draft opinion attacked that principle, which is essential to Roe, and stated:

We hold that Roe and Casey must be overruled. The Constitution makes no reference to abortion, and no such right is implicitly protected by any constitutional provision, including the one on which the defenders of Roe and Casey now chiefly rely — the Due Process Clause of the Fourteenth Amendment.

The draft opinion also recommended that the legal status of abortion should henceforth be left to lawmakers — federal and state — to decide ("It is time to heed the Constitution and return the issue of abortion to the people's elected representatives"), even though both opponents and supporters of abortion rights have made what the draft describes as "important policy arguments":

Here's how Alito's draft summarized the "important policy arguments" made by both sides.

First, "defenders of Roe and Casey":

Meanwhile, "Americans who believe that abortion should be restricted ... note that":

Remember, those are not arguments or claims that Alito or anyone else on the majority is making. Those are arguments made by others, but listed in Alito's draft opinion as representative of the most up-to-date policy positions on either side of the great moral and legal debate over abortion.

One can quite legitimately dispute the fairness and representativeness of Alito's lists of "important policy arguments," but it cannot reasonably be asserted that these are arguments Alito himself is making.

Adoption and the 'Domestic Supply of Infants'

The argument about adoption is as follows:

Historically, one reason why a woman who was not in a position to care for a child might have chosen to access an abortion, rather than choosing to give birth and place the baby for adoption, was that she was concerned the child would not be properly cared for in the adoption system.

However, in recent years the number of would-be adoptive parents has far exceeded the number of infants placed for adoption, which increases the likelihood of a stable and loving family environment being found for any given baby, thus undermining the relevance of the "adoption fear" basis for abortion, as outline above.

In order to explain this point, Alito's draft opinion included a footnote that cited an August 2008 report published by the federal U.S. Centers for Disease Control and Prevention (CDC), as well as some CDC statistics on adoption:

The footnote also quoted from the 2008 CDC report, as follows:

Nearly 1 million women were seeking to adopt children in 2002 (i.e., they were in demand for a child), whereas the domestic supply of infants relinquished at birth or within the first month of life and available to be adopted had become virtually nonexistent.

Some readers might quite reasonably find it jarring to see the language of "supply and demand" — more commonly seen in the context of markets — being used in a federal government report about adoption.

However, this is not what several viral social media posts said in May 2022. They said, specifically, that Alito and other conservative justices had themselves argued for the prohibition of abortion access, in order to increase or protect the "domestic supply of infants" made available for adoption. That claim fails in the following ways: