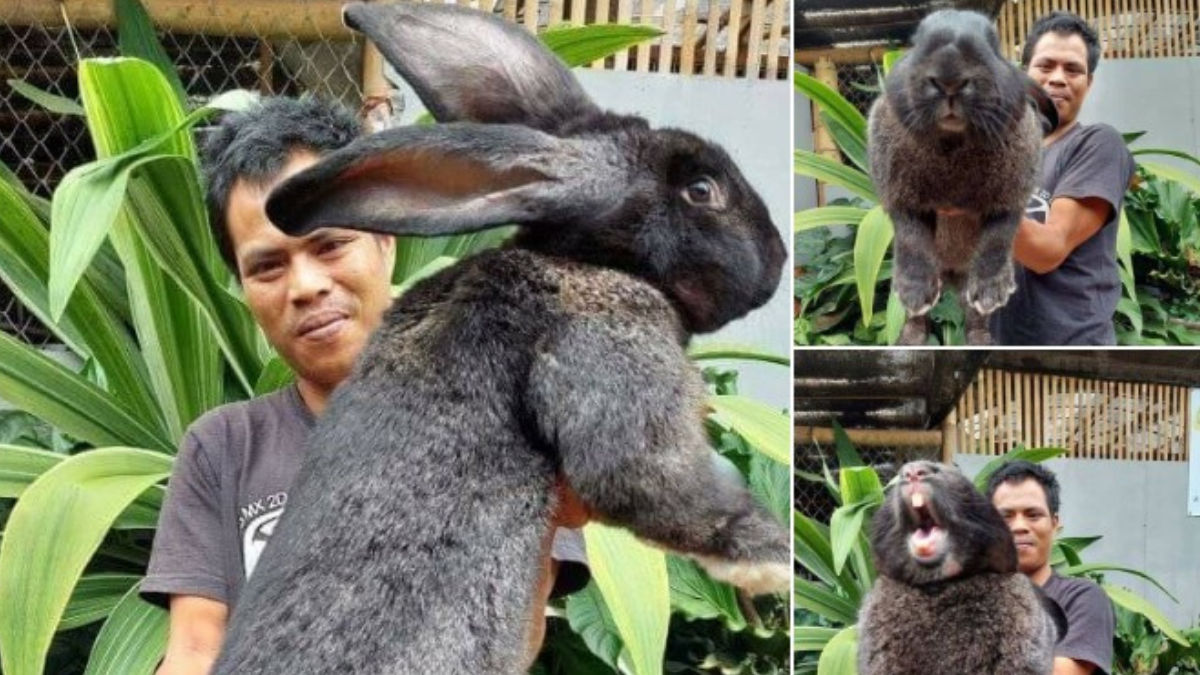 Claim:
Photographs show a rare, giant Sumatran striped rabbit that was rescued by authorities after being offered for sale on Facebook.
Rating:

In April 2022, a set of photographs went viral on social media that supposedly showed a very rare Sumatran striped rabbit that was rescued by authorities after it was offered for sale on Facebook: The Facebook post reads: "A Sumatran striped rabbit, widely considered to be the rarest rabbit in the world, has been rescued from this man after he puts it on sell on Facebook. The Sumatran Striped Rabit [sic] is one of the rarest breed of rabits [sic]. The rare rabbit has now been safely released back into the forest by the park rangers where is very well tracked by cameras."

This caption does not match up with this set of pictures. The animal in these photographs is not an extremely rare Sumatran striped rabbit.

A Rare Sumatran Striped Rabbit (Not Pictured Above) Truly Was Rescued

A few months before these photographs went viral, a Sumatran striped rabbit — an endangered species of rabbit found in Indonesia — was truly rescued by authorities after the animal was being offered for sale on Facebook.

In August 2021, Fauna & Flora International (FFI), an international conservation society dedicated to protecting the planet's threatened wildlife, announced that they, along with the Kerinci Seblat National Park, had rescued one of these rare rabbits and that it would soon be released back into the wild:

Sumatran striped rabbits are seldom spotted, in either sense of the word. Known only from a dozen Dutch museum specimens collected in the early 20th century, plus an occasional sighting in the wild and a handful of camera trap images, the species is widely considered to be the rarest rabbit in the world. Finding one flaunted on Facebook is the Indonesian equivalent of stumbling upon a thylacine in a Tasmanian pet shop, and the conservation community was quick to respond.

After receiving a tip-off about the Facebook post, Fauna & Flora International (FFI) and the Kerinci Seblat National Park authorities quickly tracked down the would-be seller and rescued the priceless rabbit, which was held in safe custody until it was ready to be released.

Here's a photograph of the Sumatran striped rabbit that was actually rescued from sale on Facebook: What About the Giant Rabbit Photos?

The Sumatran striped rabbit only grows to about 16 inches in length and is clearly not shown in the viral Facebook photographs at the top of this page. So what kind of rabbit is featured in those photos? And, more importantly, are the photos real?

While many social media users commented that the giant rabbit photos were digitally altered, that's not the case. These are real photographs of a really big rabbit. While it's possible that some forced perspective is at play here — an optical trick where an object is made to appear larger than it really is by being placed closer to the camera than other objects in frame — this rabbit is still quite large.

These photographs were posted to a Philippines rabbit breeder Facebook group in February 2022 and appear to show a man holding a German gray giant, a species of rabbit that can grow to nearly 3 feet in length and can weigh up to 25 pounds.

Here's a video from the CBC about some other big bunnies: