A viral thread makes a series of factually suspect conclusions based off a blurry photo of three boxes of European Sudafed. 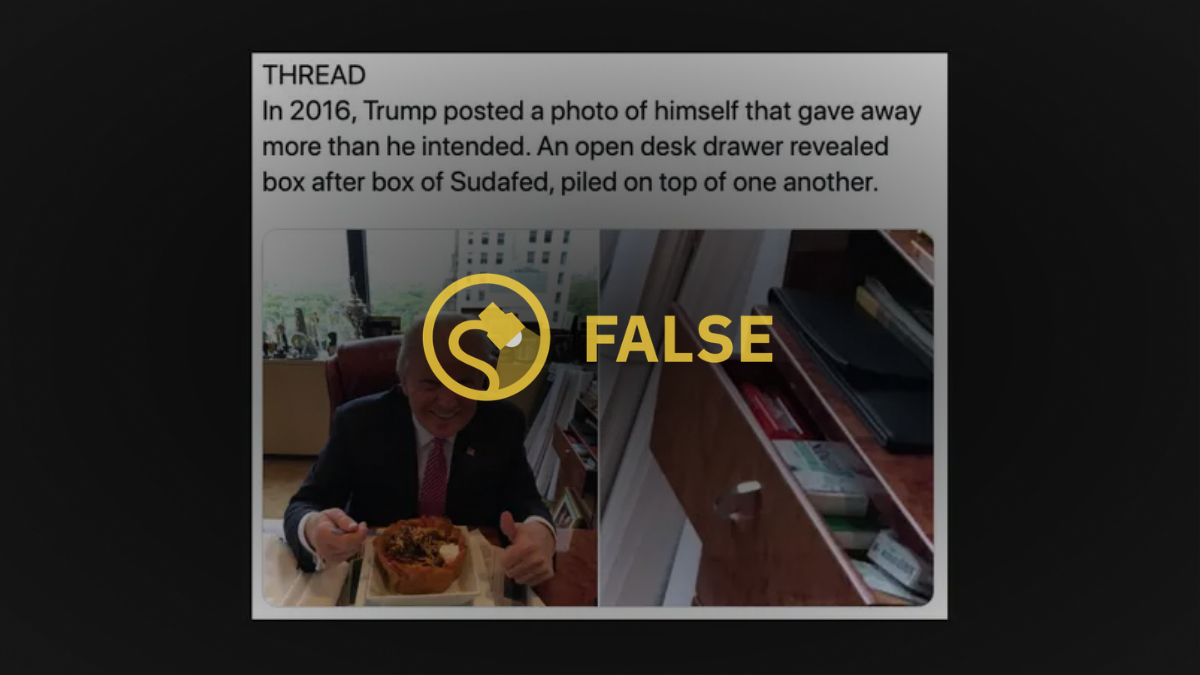 Claim:
A photograph of U.S. President Donald Trump in his Trump Tower office in 2016 with several boxes of Sudafed in the background provides credible evidence of stimulant abuse.
Rating:

In October 2019, a picture from 2016 of U.S. President Donald Trump eating a taco bowl with the caption “I love Hispanics” re-entered online discourse, this time as evidence that “then-candidate Trump was abusing Sudafed.” The photo — which appears to show three boxes of the name brand nasal decongestant Sudafed in a drawer in the background — is authentic. But claims of his drug abuse stem from a factually challenged Twitter thread.

On Oct. 5, 2019, Twitter user JRehling published a thread that highlighted the Sudafed, identified it as a UK formulation, and then made these points as evidence of a nefarious drug-abuse problem:

These talking points, in turn, were repeated uncritically by several media outlets, most notably Inquisitr, which also suggested the Sudafed was an example of a broader pattern of stimulant abuse by the president. This argument, we show below, is flawed on numerous accounts.

“Sudafed is sometimes used for a high that includes increased alertness.”

Sudafed is a brand name for a series of nasal decongestant and cold medication products. Sudafed products generally come with one of two drugs as their active decongestant ingredient: either phenylephrine or pseudoephedrine. Pseudoephedrine is the more powerful of the two chemicals, and it is this chemical that people sometimes abuse for a high or stockpile to make methamphetamine. As such, its use is regulated in the United States.

Taking at face value the reasonable-appearing claim proffered in that thread that the drugs in the drawer are the product “Sudafed Mucus Relief Day & Night” would suggest that the drug abuse claim is fatally flawed. This formulation contains phenylephrine, which would mean that the drug Trump is allegedly abusing for a high is not capable of delivering such a high in the first place. “The desk drawer full of Sudafed ... indicate that the legal limits of purchase are being circumvented.”

As previously discussed, the Sudafed product at issue here does not contain a chemical with any legal limits on purchase. In the U.S., pseudoephedrine is regulated more tightly than other over-the-counter drugs thanks to the Combat Methamphetamine Epidemic Act of 2005. That law imposes monthly limits on retail or online purchases of  pseudoephedrine-containing products and requires the collection of some personal details when purchasing them. Phenylephrine is not regulated under this law, and as such there is no “legal limit” for Trump to be circumventing by purchasing or stockpiling the drug.

“The boxes include a type that is only sold in the United Kingdom, with a different box and distinctive ingredients not found in the U.S.”

While the specific formulation of acetaminophen, caffeine, and phenylephrine does not appear to exist as an over-the-counter product in the United States, it would be ridiculous to suggest than any of these three ingredients are “not found in the U.S.,” or to suggest that any of them are used for a high.

Because the central facts used to make the argument that Trump is abusing Sudafed based on this photograph are rooted in fatally flawed logic and incorrect statements of fact, we rank the claim as "False."

U.S. Department of Justice.   “General Information Regarding The Combat Methamphetamine Epidemic Act of 2005.”     May 2006.