Did a Banned Federal Study Show That Refugees Bring in More in Government Revenues Than They Cost?

A U.S. Department of Health and Human Services study compared the tax revenues generated by refugees to the overall cost of resettlement. 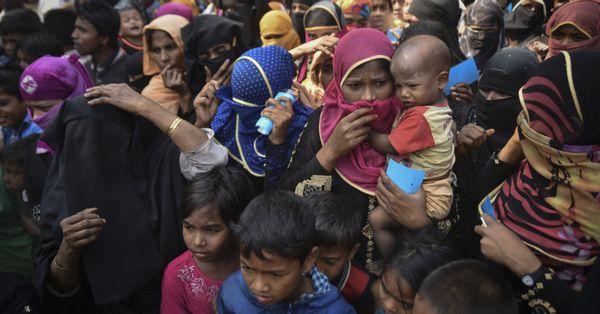 Claim:
A leaked federal study showing that refugees to America brought in $63 billion more in government revenues than they cost in the last 10 years was "banned" by the Trump administration.
Rating:

A leaked version of a federal study held that refugees to America brought in much more in revenue than they cost the U.S. government.

That study was not "banned"; rather, mention of the fiscal benefits of admitting refugees was excised from it before it was finalized.

One of the arguments made by the Trump administration for lowering the cap on the number of refugees allowed into the United States is that the costs of refugee resettlement outweigh its benefits.

Estimates vary on the total annual cost of processing and resettling refugees in the U.S., but a rough breakdown by the National Conference of State Legislatures put the total expenditures for accepting approximately 70,000 refugees in 2014 at $582 million.

These cost estimates rarely attempt to take into account any economic benefits refugees might provide to the countries that take them in. According to a Facebook meme making the rounds since mid-2018, just such an analysis was undertaken by the Trump administration, but the results were suppressed because they undercut the official position:

A recently leaked federal study found that refugees to America brought in $63 billion in government revenues than they cost in the last 10 years. Trump chief policy adviser Stephen Miller banned the release of the study, because it contradicts his claim that refugees are too costly. Pass it on! A leaked document fitting that description was indeed published by the New York Times in September 2017. It was an early draft of a report by the Department of Health and Human Services (HHS) detailing, at the president's request, the estimated long-term costs of the United States Refugee Admissions Program. The Times noted that:

The internal study, which was completed in late July but never publicly released, found that refugees “contributed an estimated $269.1 billion in revenues to all levels of government” between 2005 and 2014 through the payment of federal, state and local taxes. “Overall, this report estimated that the net fiscal impact of refugees was positive over the 10-year period, at $63 billion.”

All in all, the report said, the net fiscal impact of refugees over the 10-year period was positive, not negative, to the tune of $63 billion at all levels of government: The study concluded that refugees on average had a net fiscal impact "comparable" to that of the general population:

However, none of this information was contained in the final report delivered to the President, the Times reported, noting that some of the refugee program's proponents believed the results of the study were "suppressed" internally. Administration officials characterized those results as illegitimate:

“This leak was delivered by someone with an ideological agenda, not someone looking at hard data,” said Raj Shah, a White House spokesman. “The actual report pursuant to the presidential memorandum shows that refugees with few skills coming from war-torn countries take more government benefits from the Department of Health and Human Services than the average population, and are not a net benefit to the U.S. economy.”

John Graham, the acting assistant secretary for planning and evaluation at the health department, said: “We do not comment on allegedly leaked documents” and that no report had been finalized. He noted that Mr. Trump’s memorandum “seeks an analysis related to the cost of refugee programs. Therefore, the only analysis in the scope of H.H.S.’s response to the memo would be on refugee-related expenditures from data within H.H.S. programs.”

The three-page report the agency ultimately submitted, dated Sept. 5, does just that, using government data to compare the costs of refugees to Americans and making no mention of revenues contributed by refugees.

The Times also said that according to White House sources, Trump adviser Stephen Miller, who is reputed to be the chief architect of the administration's immigration policies, "personally intervened" to ensure that only the costs of admitting refugees, and not the fiscal benefits thereof, were enumerated in the final report. (According to the New Yorker, the White House denied that Miller was involved in producing the report.)

The Facebook meme is largely accurate, then, although it somewhat mischaracterizes what became of the original draft report. It wasn't "banned" from release, in that it doesn't appear the report was ever intended to be made public. It was allegedly suppressed, however, in that it never reached President Trump's desk, and all discussion of the fiscal benefits of admitting refugees into the United States was excised from the final document.