Did Biden Say This About People Questioning His Religion?

"Next person [who says] I'm not religious, I'm going to shove my rosary beads up their ass," posts claim he said. 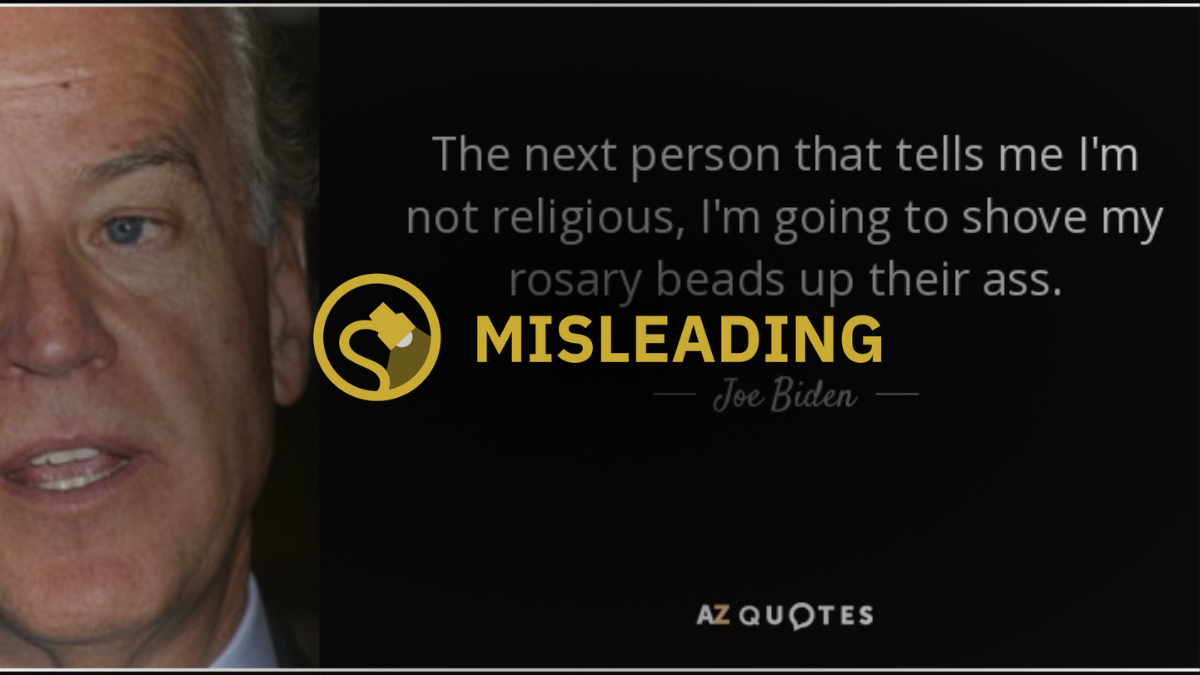 Claim:
Joe Biden said, "The next person that tells me I'm not religious, I'm going to shove my rosary beads up their ass."
Rating:

While the quote's syntax and message generally matched an authentic statement by Biden, he did not utter those words verbatim, nor reference the shoving of anything "up" someone's "ass." Rather, Biden's real words were: "The next Republican that tells me I'm not religious I'm going to shove my rosary beads down their throat."

Supposedly as proof of U.S. President Joe Biden's frustration over people questioning his religious beliefs, several images exist online attributing the following quote to him: "The next person that tells me I'm not religious, I'm going to shove my rosary beads up their ass."

While the quote's syntax and message generally matched an authentic statement by the politician, he did not utter those words verbatim, nor reference the shoving of anything "up" someone's "ass." Rather, Biden's real words were: "The next Republican that tells me I'm not religious I'm going to shove my rosary beads down their throat." (Bolded are words that do not match the alleged quote.)

Biden, the son of working-class Irish Catholics, is a staunch Catholic who attends Mass weekly. His faith is of such nature that in 1988, when he underwent brain surgery for a life-threatening aneurysm, he asked doctors whether he could tuck his rosary beads under his pillow.

According to the Cincinnati Enquirer, in October 2005 (when Biden was testing the waters for a possible 2008 presidential run):

Biden said that if he runs for president, he intends to aggressively defend his own values as well as those of the Democratic Party.

"If I'm the nominee, Republicans will be sorry," he said. "The next Republican that tells me I'm not religious I'm going to shove my rosary beads down their throat."

"I am so sick and tired of this pontificating about us not being the party of faith," said Biden, a Roman Catholic who has served in the Senate since the Nixon administration.

It's therefore not literally true that Biden uttered the "shove my rosary beads up their ass" line attributed to him. However, it is figuratively true, in that "shove [...] down their throats" is a milder and somewhat more polite version of "shove [...] up their ass." (It could fairly be argued that neither is all that polite, though.) Both verbalizations call up mental images of acts of physical battery, and are thus objectionable phrasings to some people, even if both posturings are generally understood and accepted as colorful overstatements rather than as actual threats.

"Shove down his throat" appears to stem from the act of forcing bitter, unpleasant-tasting medicine into the maw of a person resisting being dosed with a curative. Though the one being fed the medicine may fight and kick, the doser continues with the task because they know it's for the recipient's good.

Given that very few medicines these days are all that horrid tasting (although there are some notable exceptions), the phrase is employed as a way of conveying, "To do something the other person will hate, but which will ultimately be in the other guy's best interests." The expression also sometimes serves as a strong form of, "Make him eat his words," which can either mean "to prove him wrong" or "to make him issue a retraction." (Words issue from the mouth, after all, so making someone retract a statement by publicly exposing his error can be viewed as returning those errant words to the wrong-doer's mouth and making him chew upon them.)

Differing body parts notwithstanding, "shove up his ass" communicates the same message as does "shove down his throat": Force the other guy to endure something highly unpleasant, even if the more aggressive "ass" version does so in far more evil fashion. While there was at one time a defensible reason for prying someone's jaw open, then pouring a noxious potion down that person's gullet, there was never a defensible reason for the other. "Shove down his throat" at least has the element of "for his own good" lurking in its linguistic background, even if a genuine motive of wanting to help is not always part of what's actually being proposed in the here and now. Yet more disturbingly, the "up his ass" version not only lacks any trace of "for his own good," it also brings to the mix the specter of anal rape. Especially for this latter reason, more people will look askance at such phrasing than they will at the other.

Biden has a demonstrated propensity for gaffes, such as his January 2007 statement about then-Sen. Barack Obama: "I mean, you got the first mainstream African-American who is articulate and bright and clean and a nice-looking guy. I mean, that's a storybook, man," and his March 2010, "This is a big fucking deal" (about the signing of the health bill). His "shove my rosary beads down their throat" is but another entry in his ledger of social miscues.

As to how people view him for these utterances, the Wall Street Journal said in March 2010, "Biden is so gaffe prone that he can basically say whatever he wants at this point and, like a crotchety old relative at a family gathering, people chuckle and chalk it up to Joe being Joe — and make a T-shirt."