Did a Stormtrooper Hit His Head in ‘Star Wars: Episode IV ⁠- A New Hope’?

Multiple actors have claimed they were the clumsy stormtrooper. 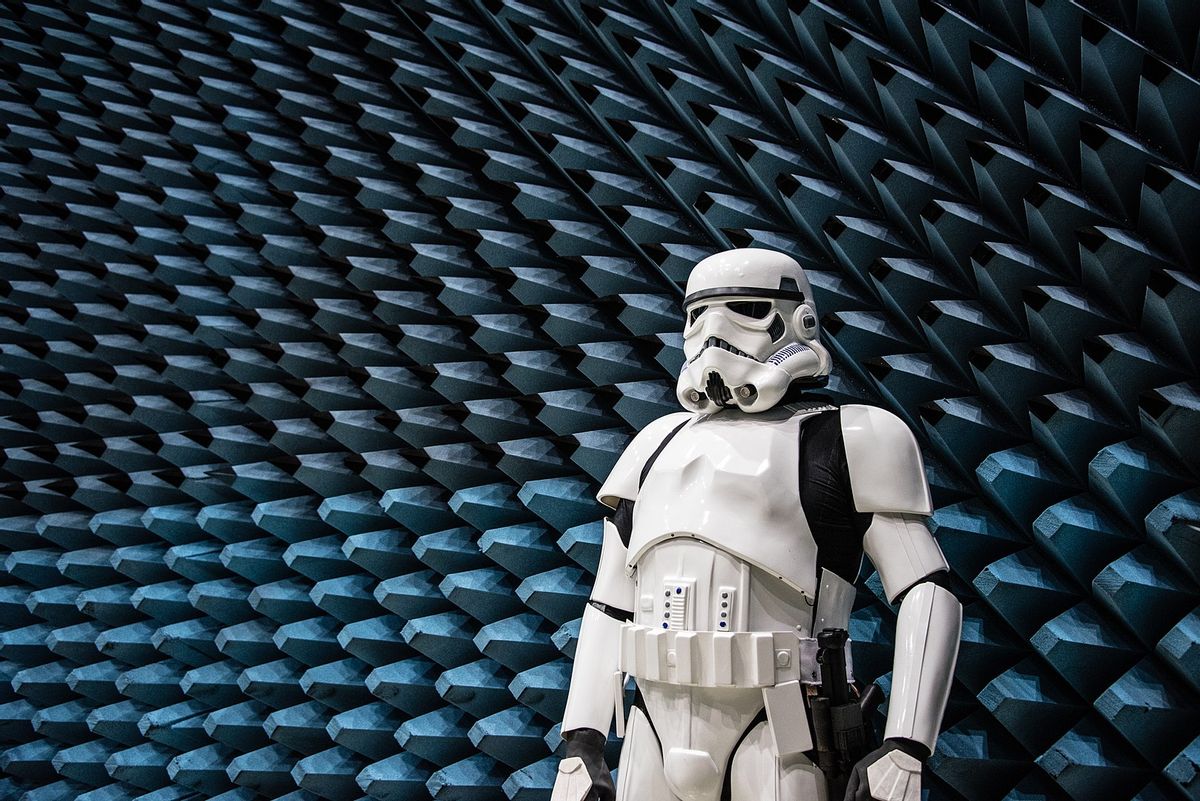 Claim:
An actor playing a stormtrooper in the movie “Star Wars: Episode IV ⁠- A New Hope'' hit his head on a door frame in a scene that was used in the final film. The sound of his head hitting the frame is audible.
Rating:

A shot of a stormtrooper hitting his head on the doorframe as he entered a room has become part of Star Wars movie lore, a humorous moment that actually made it into the first film in the series. The moment is both visible and audible in a scene in which a group of stormtroopers enters a control room, as Luke Skywalker calls for C3PO’s help over a communication device.

The above video has the exact moment the stormtrooper in the rear on the right side of the frame hits his head. To verify that this actually took place, we watched the scene on Disney+, where “Star Wars: Episode IV - A New Hope” is as of this writing, available for streaming. Sure enough, the stormtrooper hits his head, and a “thunk” sound can be heard the moment it happens.

The head-hitting moment resulted in a few actors coming forward and claiming that they were the offending stormtrooper. In a Hollywood Reporter interview for Star Wars’ 40th anniversary celebrations, actor Laurie Goode claimed to be shocked that the scene made it into the final cut:

On the second day of filming, I developed an upset stomach. By midmorning I had paid three to four visits to the loo/bathroom. Having re-dressed myself and returned to the set, I felt the need to rush back to the gents’ toilets, but I was placed in [the] shot. On about the fourth take, as I shuffled along, I felt my stomach rumbling, and “bang,” I hit my head! As I wasn’t moving too fast, it was more of a scuffed bash, so it didn’t hurt, but as no one shouted “cut,” I thought the shot wasn’t wide enough for me to be in frame.

I remember after the first two takes, we were told to hold our guns in our left hands as opposed to our right. So I believe the head bang happened on the fourth take — whatever number of takes we did, the head bang happened on the last take. When it first happened, that day I told my fellow actor on the film, Mark Kirby, that I hit my head, but we didn’t go for another take.

However, the clumsy stormtrooper role was also attributed to the late actor Michael Leader. YouTuber Jamie Stangroom investigated the story behind the stormtrooper head boink in the 2019 documentary “The Empire Strikes Door” by conducting a polygraph test with two of the three actors who claimed to be the stormtrooper (Leader declined to be interviewed during the development stages of the documentary, and died in 2016).

Goode, and another actor Martyn Reid, both believed they were the stormtrooper behind the error, and both took a test, which came out in favor of Reid.

Telling Goode he failed was a "horrible moment," Stangroom said. "I genuinely believe that he believes he was that stormtrooper even though maybe he wasn't. So telling him that he's, perhaps, been living a lie for all of these years was horrible," he continued.

Stangroom convened a panel of "experts," which included director Kevin Smith and wrestler Chris Jericho, who concluded that Reid must have been the stormtrooper. But Stangroom argued that the stormtrooper uniforms were hard to see through, and he believed that all of them probably bumped their head somewhere.

Star Wars producer Gary Kurtz was even interviewed in the documentary, and he discussed how they were aware of the mistake, using the clip because it was the best take they had. The documentary claimed that the sound effect of the helmet hitting the door was added in the 2004 DVD re-release. The sound effect, as noted above, is in the streaming version on Disney+ as well.

The full documentary can be seen on YouTube, and the interview with Kurtz is at the 30 minute mark:

None of the crew members interviewed by Stangroom could recall which actor was beneath the infamous helmet that hit the doorframe.

Given that both the mistake and the sound effect are real and noticeable in the streaming version, as well as acknowledged by the producer of the film, we rate this claim as “True.”

Previous Article
Next Article
Article 1 of 19 in Collection

Apr. 28, 2022: Added update on when Leader declined to participate in the documentary.