Is This a Pic of Steve Irwin Hanging Out with Mr. Rogers in Bob Ross T-Shirt?

The real world simply does not allow this amount of cool to gather in one place. 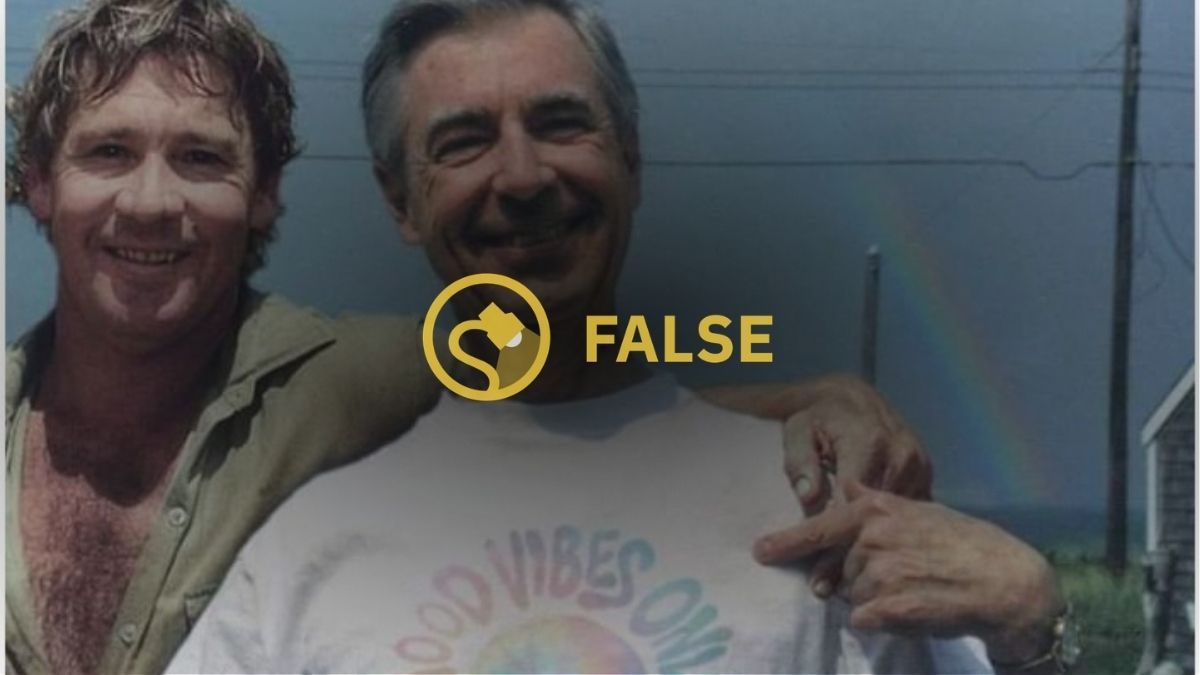 Claim:
A photograph shows Mr. Rogers in a Bob Ross T-shirt while hanging out with crocodile hunter Steve Irwin.
Rating:

In March 2021, a picture supposedly showing television host Fred Rogers (aka "Mr. Rogers") in a shirt bearing a likeness of painter Bob Ross while hanging out with Australian wildlife expert and crocodile hunter, Steve Irwin, was circulated on social media: This is not a genuine photograph of Rogers and Irwin. This is a composite of at least two different pictures. Additional editing was done to alter Rogers' shirt and to add a rainbow in the background.

It appears that this image was created by Instagram user Vemix (@_Vemix_), a digital artist who has created several other composites of unexpected celerity pairs, such as Kurt Cobain with Tony Hawk, and Michael Jackson with the Notorious BIG. Here's a look at the original post.

The portion of this picture featuring Rogers comes from a photograph of the famous children's television host that was shared on the 10th anniversary of his death in 2013 by the Davide's Tomato Sauce Facebook page. The owner of this food company, David Calamosca, was close friends with Rogers, and it appears this picture shows Rogers on Calamosca's farm. In the original, Rogers is wearing a shirt that reads "Davide Fresh Pasta and Sauce."

While the page is no longer active, here's an excerpt from an archived section of the Davide's Tomato Sauce website that details Calamosca's relationship with Rogers:

I'll never forget the day I passed him in the barnyard. I heard that the famous "Mr. Rogers" was coming to film how milk is made. My job was to clean up the milking parlor. Walt Turner said "It never looked so good." And there he was, walking in the sunshine in the barnyard. Somewhat intimidated, I said, "Hi Mr. Rogers, I really appreciate your 'ministry,'" hoping to appeal to him at a deeper level. Without missing a step as we passed he said, "And I appreciate yours." I helped "make" milk. I cleaned after cows. What could this American icon possibly mean by that? I would learn that at least in the eyes of one great person, one American hero, one Pittsburgh legend, my life, my work, my mission, my sauce, meant something.

Interestingly, this photograph also debunks a longstanding (and long-since debunked) rumor about Mr. Rogers. The famous talk show host did not wear long sleeves to cover up tattoos.

The portion of this viral picture featuring the so-called "crocodile hunter" comes from a photograph Irwin took with his father, Bob Irwin, in Beerwah, Australia, in 2003. The pictures of Steve Irwin and Rogers were digitally edited together to make it appear as if these television icons had been photographed together.

Here's a look at the genuine images (left) and the doctored image (right): (We rotated the original picture of Irwin and his father to better match the composite.)

The doctored picture was further edited to add a rainbow in the background and to make it appear as if Rogers was wearing a shirt featuring television painter Bob Ross.