Does Stepping on a Rusty Nail Cause Tetanus?

Although puncturing one's skin with a nail that has been in contact with the soil is a risk factor for tetanus, rust has nothing to do with the disease. 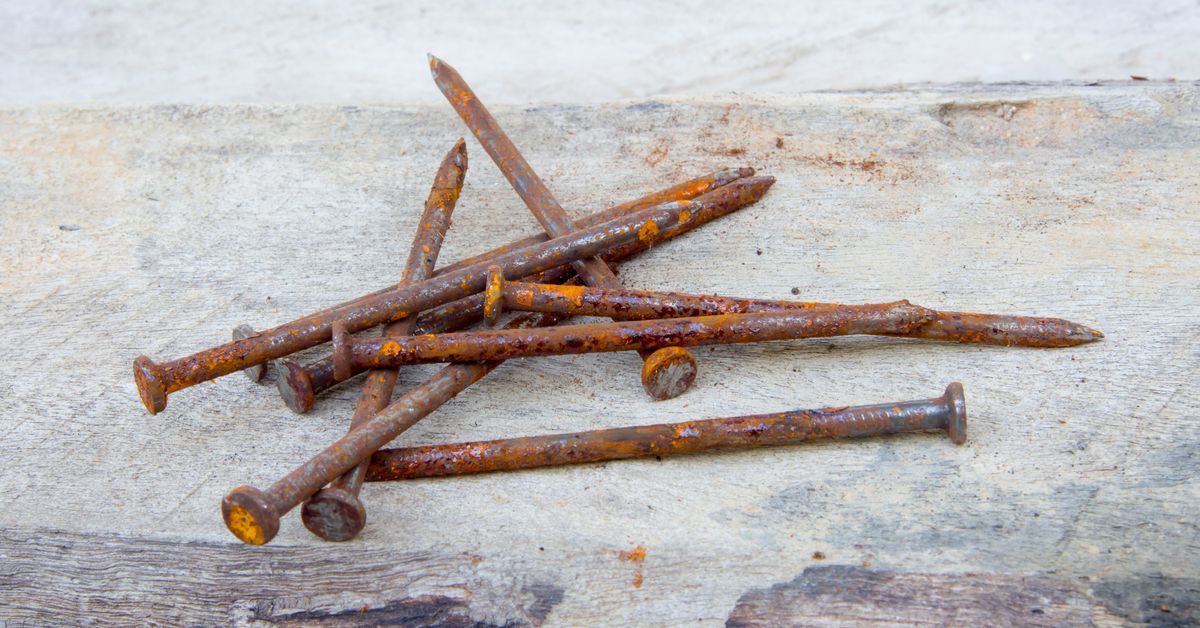 Rust does not cause tetanus. This notion stems from the oft-repeated claim that stepping on a rusty nail will give you the disease. There are valid scientific reasons, discussed below, for using a rusty nail as an example of the kind of injury that could potentially result in tetanus; but chemically and medically speaking, the rust has nothing to do with it.

Rusty nails can pierce the skin and have likely been left abandoned in soil for some amount of time. The bacterium that does cause tetanus (Clostridium tetani) is fairly ubiquitous in soil. A rusty nail, the logic goes, has likely been in contact with soil for a longer period of time than a fresh one, and — thanks to the rough surface created by the rust — has ample space to collect and harbor that bacteria:

If you have been injured outside or in any way that makes contact with soil likely, contact your provider about your risk of getting a tetanus infection. Injuries and wounds should be thoroughly cleaned right away. If the tissue of the wound is dying, a doctor will need to remove the tissue.

You may have heard that you can get tetanus if you are injured by a rusty nail. This is true only if the nail is dirty and has the tetanus bacteria on it. It is the dirt on the nail, not the rust that carries the risk of tetanus.

C. tetania are spore-forming bacteria. In spore form, they are able to survive in the presence of some oxygen, but in the growth stage of life they require an oxygen-free environment to live and develop. As spores, they can be found both in soil and in the intestinal tracts of many animals. If these spores enter the body through an open wound, however, they can germinate in the more anaerobic areas of the human body, creating a toxin that spreads through a person’s muscular and circulatory systems before ultimately disrupting a victim's central nervous system itself:

C. tetani usually enters the body through a wound. In the presence of anaerobic (low oxygen) conditions, the spores germinate. Toxins are produced and disseminated via blood and lymphatics. Toxins act at several sites within the central nervous system, including peripheral motor end plates, spinal cord, and brain, and in the sympathetic nervous system.

The typical clinical manifestations of tetanus are caused when tetanus toxin interferes with release of neurotransmitters, blocking inhibitor impulses. This leads to unopposed muscle contraction and spasm. Seizures may occur, and the autonomic nervous system may also be affected.

Tetanospasmin is a potent neurotoxin, and the symptoms it can create in those who develop tetanus are a chilling reminder of that fact:

Trismus (lockjaw) — the inability to open the mouth fully owing to rigidity of the [muscles used for chewing]—is often the first symptom. [...] Generalised tetanus is the most common form of the disease, and presents with pain, headache, stiffness, rigidity, [an involuntary backward arching of the head, neck, and spine], and spasms, which can lead to laryngeal obstruction.

These may be induced by minor stimuli such as noise, touch, or by simple medical and nursing procedures such as intravenous and intramuscular injections, suction, or catheterisation. The spasms are excruciatingly painful and may be uncontrollable leading to respiratory arrest and death.

While tetanus cases remain common in developing countries, the success of the tetanus vaccine, which uses an inactivated form of tetanospasmin to impart immunity against the toxin, has resulted in steeply declining rates in the disease.

Because the rust present on a nail is not in any way the cause of tetanus, however, we rank the claim that rust causes tetanus as false. That being said, an open wound that allows any soil bacteria into the body, including those caused by rusty nails, presents a risk of tetanus.

[Update 7 May 2018]: Changed the claim from "stepping on a rusty nail causes the disease tetanus" to "rust causes tetanus" and clarified the origins of the latter.