U.S. President Donald Trump's choice for Federal Reserve governor faced scrutiny of his past writings and pronouncements in the spring of 2019. 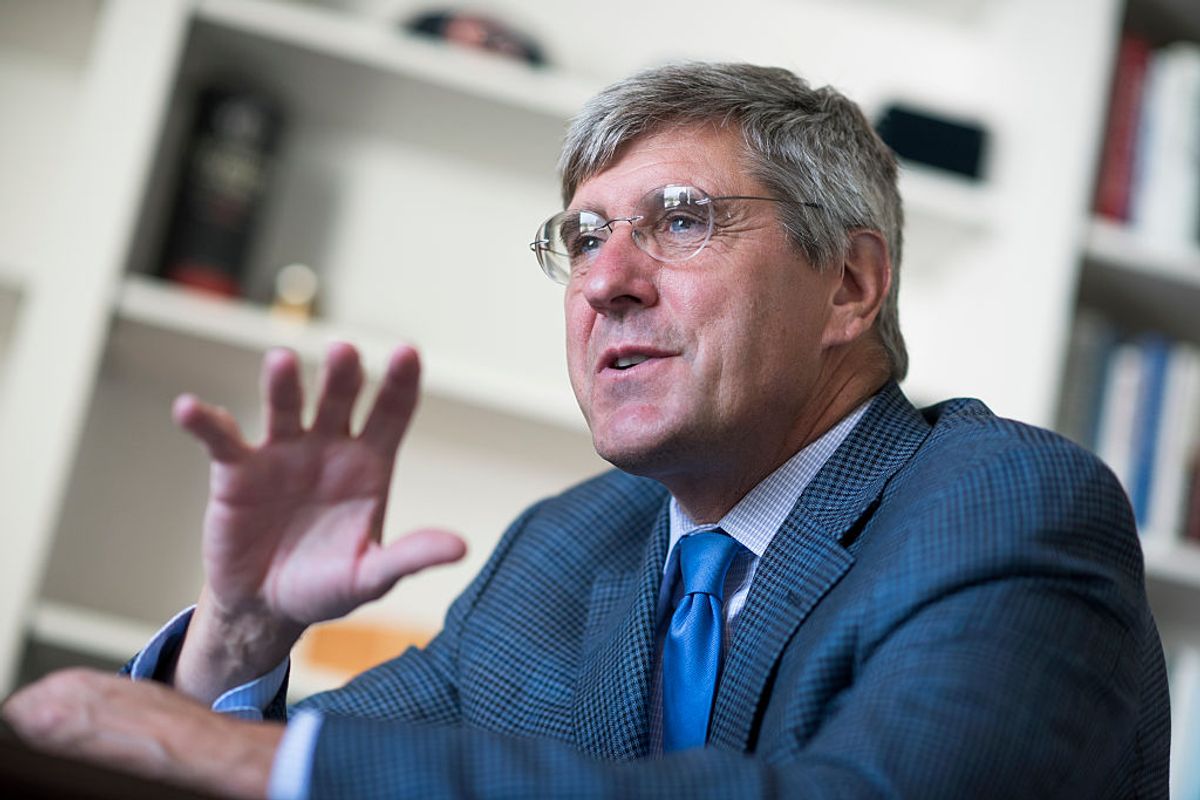 Claim:
Conservative commentator Stephen Moore once said: "I'd get rid of a lot of these child labor laws, I want people starting to work at 11, 12."
Rating:

Conservative economics commentator Stephen Moore, President Donald Trump's choice to lead the Federal Reserve, withdrew his name from consideration for nomination to the role in early May 2019, after public scrutiny of his past writings and pronouncements.

Most notably, Moore had disapproved of women's economic self-sufficiency; suggested that women should not be allowed to officiate at N.C.A.A. events; and made racially charged remarks about slavery, the Civil War and the presidency of Barack Obama.

One of the many pronouncements in question was highlighted in a 30 April meme posted by the left-leaning Facebook page "The Other 98%." The meme featured a photograph of Moore along with the following text:

That widely shared meme prompted multiple inquiries from Snopes readers about the authenticity of the quotation it contained. Moore did indeed once say, in earnest, that he would favor getting rid of some child-labor laws, and he advocated for children and teenagers to enter the work force at a much younger age than they currently do. However, after those remarks were brought to light in April 2019, he stated that he did not support the elimination of child-labor laws.

The remarks that formed the basis of the Other 98%'s meme in April 2019 came during a July 2016 panel discussion at that year's Republican National Convention in Cleveland, Ohio. The discussion, on the subject of minimum wage, was hosted by the Libertarian-leaning group FreedomWorks and featured Moore along with David Madland, a senior fellow at the left-leaning Center for American Progress' American Worker Project.

Moore began his contribution by decrying what he presented as a declining rate of workforce participation among young people, saying, "Young people are starting to enter the workforce at a later age," something he described as "a really big problem with the American economy." He continued:

... What you may not know is that the biggest decline in labor force participation has not been among older people. In fact, older people are more likely to work now than they did before. The big decline in labor force participation has been people between the ages of 16 and 30, and that's highly problematic because if you don't start -- the statistics are very clear on this -- if you don't start -- look, I'm a radical on this. I'd get rid of a lot of these child-labor laws, I want people starting to work at 11, 12. It's amazing how many people I meet who are successful ... who grow up on a farm and started working on the farm at age 10, 11, 12 years old, where you learned a work ethic.

What is the point I'm trying to get at? I think the most damaging thing we can do right now to the U.S. economy is create further barriers to young people getting in the work force. ... So if we do have a higher minimum wage nationally ... we must must must must have a policy that has a six-or-seven-dollars-an-hour teenage minimum wage, because we're going to price a lot of those young people out of the workforce, and they're not going to get the training we need ... "

Moore's remarks can be watched in the video below:

Moore did not smile or laugh or give any indication that any of his remarks were intended to be anything other than earnest and serious. Furthermore, the quotation presented in the Other 98% meme was accurate, and did not contain any gaps or elisions. Although the meme did not (and could not) include the words leading up to and following the quotation, the meme did not misrepresent the sense or meaning of what Moore said. For those reasons, we issue a verdict of True.

On 30 April, Moore provided a statement to the political news website The Hill in which he affirmed that he did not favor getting rid of child-labor laws, contrary to what he had said in his 2016 FreedomWorks appearance:

"Stephen Moore, whom President Trump has floated for an open seat on the Federal Reserve Board, responded Tuesday following newly unearthed comments about removing many child labor laws.

'I don’t support eliminating child labor laws,' Moore said in statement shared with The Hill on Tuesday. 'My point has been that when people work at a younger age — i.e., on the farm or doing chores, a paper route, bagging groceries — those workers tend to have a higher lifetime income than young people who don’t work.'

'Lifetime earnings are correlated with how soon a person starts working,' he added. 'We do a great disservice when we keep young people — teenagers — out of the workforce.'"

The Other 98% posted its meme shortly before The Hill updated its article with that statement from Moore, so in addition to being accurate in and of itself, the meme did not knowingly leave out Moore's subsequent comments in which he resiled somewhat from his 2016 pronouncements.