Is Stephen Miller a Descendant of Asylum Seekers Who Fled Anti-Semitic Violence?

The White House senior advisor is the great-grandson of a Jewish immigrant who fled the poverty and pogroms of the Russian Empire in the early 1900s. 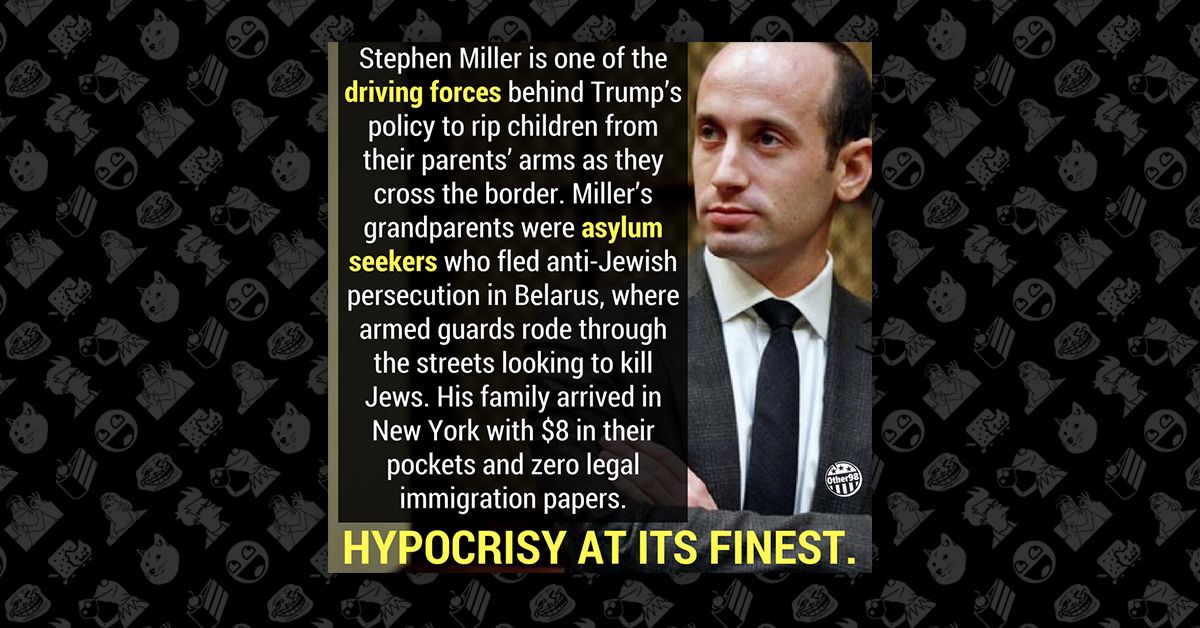 Claim:
Stephen Miller — a principal architect of the Trump administration’s immigration policy — is the descendant of asylum seekers who escaped anti-Jewish persecution in Eastern Europe.
Rating:

Stephen Miller, a senior advisor to President Trump, is often described as the architect of some of Donald Trump’s most exclusionary immigration policies, including the chaotically executed “Muslim ban” and calls to build a border wall.

Formerly a member of senator-turned-Attorney General Jeff Sessions’ communication staff, he has played a central role in developing the “zero tolerance policy” announced by Sessions on 6 April 2018, which resulted in thousands of children forcibly separated from their parents at the southern border of the United States.

On 20 June 2018, widespread public outrage lead the President to sign a vague executive order directing immigration officials to imprison both parents and children together, but Miller remains in favor of the zero tolerance policy and its use as a deterrent against illegal immigration.

Memes and think pieces have suggested that Miller’s policy recommendations — which serve to prevent poor or persecuted immigrants from coming into the United States from Latin American countries as well as block people from predominantly Muslim countries — are hypocritical, as his own family is descended from Jewish immigrants who arrived with no money and unable to speak English, escaping the pogroms and poverty of the Russian Empire.

Factually speaking, this is an accurate description of how Miller’s mother’s family came to the United States.

Stephen Miller’s mother belongs to the Glosser family, which has its ancestral roots in the currently Belarusian (but formerly Russian) city of Antopol. One branch of the family found themselves in Johnstown, Pennsylvania and eventually become proprietors of a prominent department store (named, appropriately, Glosser Bros. Department Store.) That business was so influential to the community that its history was published in 2014, on the 25th anniversary of its closing. That book describes the family’s immigrant origins:

We're not sure what last name they had in the Old Country...though members of the family listed the name "Glotzer" on their paperwork when they finally emigrated to America. Whatever their last name, the husband and wife who were destined to someday become the Glossers of Johnstown were just Wolf Leib and Bessie of the Eastern European town of Antopol, which was part of the Russian Empire. [...]

[Wolf and Bessie] came to Ellis Island on January 7, 1903 aboard the German ship the S.S. Moltke. According to the ship's manifest, he had a grand total of $8.00 in his possession.

The early 1900s saw a violent, rising antisemitism in the Russian Empire — an infamous period of history known for the pogroms, which resulted in thousands of Jewish people murdered in brutal, state-sponsored mob violence:

When the czar was assassinated in 1881, the crime was blamed, falsely, on a Jewish conspiracy, and the government launched a wave of state-sponsored massacres known as pogroms. Hundreds of Jewish villages and neighborhoods were burned by rampaging mobs, and thousands of Jews were slaughtered by Russian soldiers and peasants. The pogroms caused an international outcry, but they would continue to break out for decades to come.

Between 1900 and 1914, when the first Glossers arrived in America, 1.5 million Jews had emigrated from Eastern Europe to escape famine and bloodshed; of those, a vast majority settled in the United States. An 1898 article published in the Atlantic captured the sentiment of Russian Jews during this time:

There is no hope for Israel in Russia. The salvation of the downtrodden people lies in other parts, in a land beyond the seas, which knows no distinction of race or faith, which is a mother to Jew and Gentile alike. In the great republic is our redemption from the brutalities and ignominies to which we are subjected in this our birthplace. In America we shall find rest; the stars and stripes will wave over the true home of our people. To America, brethren! To America!

Before 1924, there were no immigration laws in existence that the Glossers could have broken (or abided by) during their journey, making it much easier to find legal refuge in the United States as an Eastern European then than it is for those seeking asylum in the United States in 2018. The author of the Glosser Bros. Department Store's history book imagined the family's relief once they arrived:

Imagine living in a place where armed Cossacks ride through the streets, looking to cripple or kill you. A place where the non-Jewish peasants sic their dogs on your children. Where the threat of ethnic massacres, or pogroms, constantly hangs over your head. Where your home has a dirt floor, a thatched roof, and no indoor plumbing, and you barely scrape by, selling kerosene, salt, and potato bread in a humble market stall. Now you know how the Glossers felt before they came to Johnstown.

One of the founding brothers of Glosser Bros. — Sam Glosser, son of Wolf and Bessie — is the great-grandfather of Stephen Miller. In response to a story highlighting Miller’s connection to Johnstown published in the local Tribune-Democrat, Miller’s uncle David Glosser — who once wrote, “I wish Stephen career success and personal happiness, however I cannot endorse his political preferences” — left a detailed account of his family's roots:

Starting with exactly nothing, one branch of the family established the scrap yard business, and our branch built Glosser Brother's department store. [...] We thrived. This was the miracle of America. While there was always a certain amount of anti-Jewish prejudice, it was not universal or state sponsored, we had equal protection of the law, freedom of speech and religion, and we enjoyed good relations with our neighbors. [...]

My nephew [Stephen Miller] and I must both reflect long and hard on one awful truth. If in the early 20th century the USA had built a wall against poor desperate ignorant immigrants of a different religion, like the Glossers, all of us would have gone up the crematoria chimneys with the other six million kinsmen whom we can never know.

In a 19 June 2018 interview (whose on-the-record audio the New York Times controversially withheld at the request of the White House), Miller described the intended goals of the so-called “zero-tolerance policy” that separated children from their parents as one meant to dissuade people from thinking they could successfully seek refuge in the United States:

From where Mr. Miller sits, illegal immigration is driven by a belief among people outside the United States that those who make it across the border will be allowed to stay indefinitely. “The success rate is the predominant factor that drives illegal migration,” he told us. By instituting a zero-tolerance policy, Mr. Miller said, the administration is sending a message that should reduce the flow of illegal immigration into the country.

The Glossers, of course, have remained in America indefinitely since their arrival in 1903. So successful have they been, in fact, that one of their descendants is currently a senior advisor to that nation’s highest office.

While a lack of immigration laws for Europeans in the 1900s would have made an official asylum request unnecessary, the Glossers did escape state-sponsored ethnic persecution — conditions that could legally form the basis of an asylum claim under the modern immigration system — by seeking refuge in America. As such, we rank the claim that Miller is descended from asylum seekers as true.

Correction [21 June 2018]: An earlier version of this story incorrectly identified Johnstown as Youngstown.