Did Stephen Hawking Become a Christian After a Blessing from Pope Francis?

A disreputable Facebook page engaged in a time-honored ritual — the phony deathbed conversion of a prominent unbeliever. 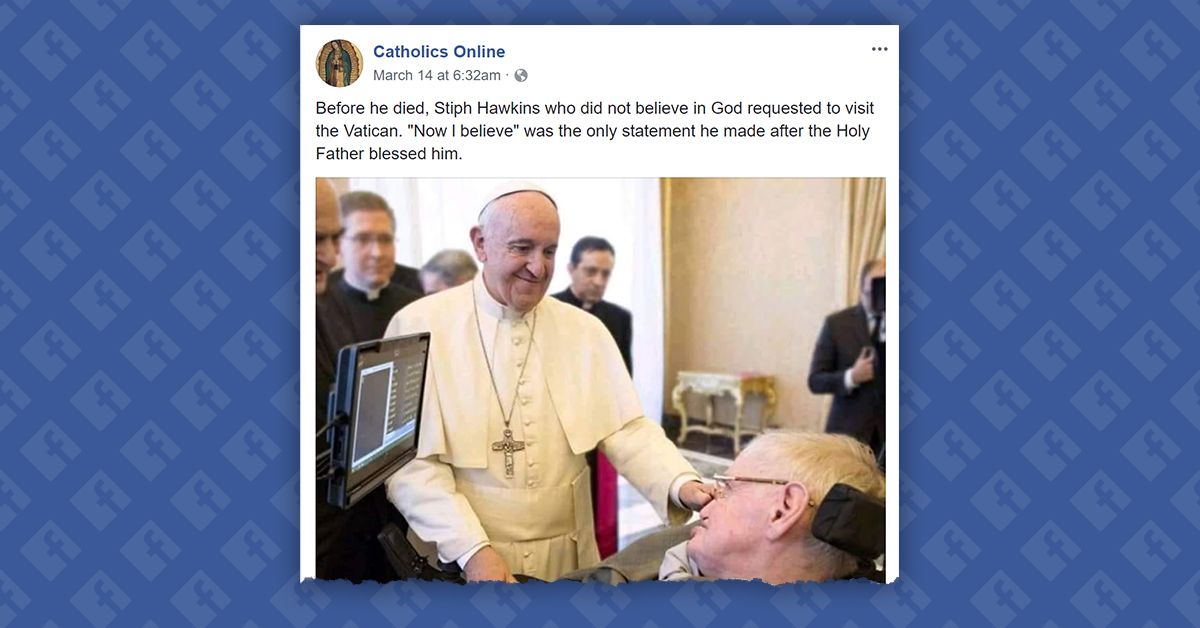 Claim:
Before his death, physicist Stephen Hawking declared his Christian faith after a visit with Pope Francis.
Rating:

The renowned physicist Stephen Hawking died in March 2018 at the age of 76, prompting a wave of tributes from the world of science, as well as reflections on his inspirational life story.

On 14 March 2018, the "Catholics Online" Facebook page posted a photograph of Hawking meeting Pope Francis alongside a fabricated claim:

Before he died, Stiph [sic] Hawkins [sic] who did not believe in God requested to visit the Vatican. "Now l believe" was the only statement he made after the Holy Father blessed him.

Hawking was a longstanding and prominent atheist who often wrote and spoke about the origins of the universe and his views on the notion of a divine Creator (or rather, a lack thereof). As the Washington Post documented after his death, Hawking told the Guardian in 2011 that he did not believe in an afterlife or heaven:

I regard the brain as a computer which will stop working when its components fail. There is no heaven or afterlife for broken down computers; that is a fairy story for people afraid of the dark.

There is no evidence that Hawking deviated from those lifelong views before his death, and he did not make any declaration of faith after a meeting with Pope Francis.The photograph in the Facebook post shows Hawking and Francis together at the Vatican in November 2016, the last time the two men met. Contrary to the claim, Hawking did not request a private visit with the pontiff; rather, he travelled to Rome for a scheduled meeting of the Pontifical Academy of Sciences.

Hawking was a valued member of the academy, having been appointed to it by Pope Paul VI in 1968. The Pontifical Academy of Sciences listed has among its aims "fostering interaction between faith and reason and encouraging dialogue between science and spiritual, cultural, philosophical and religious values." After his death, the academy honored Hawking, tweeting a series of photographs of the physicist meeting Popes Paul VI, John Paul II, Benedict XVI, and Francis.

However, notwithstanding his decades-long commitment to fostering dialogue between science and faith, Hawking remained an unbeliever himself.

Hawking's phony deathbed conversion is one in a long series of similar hoaxes of opportunity. For example, after the 2011 death of the writer Christopher Hitchens — an outspoken atheist and critic of organized religion — American evangelical Christian writer Larry Alex Taunton published a controversial book in which he claimed Hitchens had reevaluated his religious faith while he was dying of esophageal cancer. The book was widely dismissed and fiercely criticized by friends of Hitchens. Before that, there were debunked eleventh-hour "conversions" to Christianity by Charles Darwin, the father of the theory of evolution, and astronomer Carl Sagan.

This Facebook post is just another in a litany of fabricated claims about famous non-believers. The source is a Facebook page associated with the disreputable web site FrancisMary.org, which appears to have no formal affiliation with the Catholic church and routinely posts clickbait articles touting videos of Jesus Christ appearing in the flesh during a church service, or as an "angel on a white horse fighting in Israel."