Are These Steep Driveway Photos Real?

The pictures were often referred to as being "older than the internet." 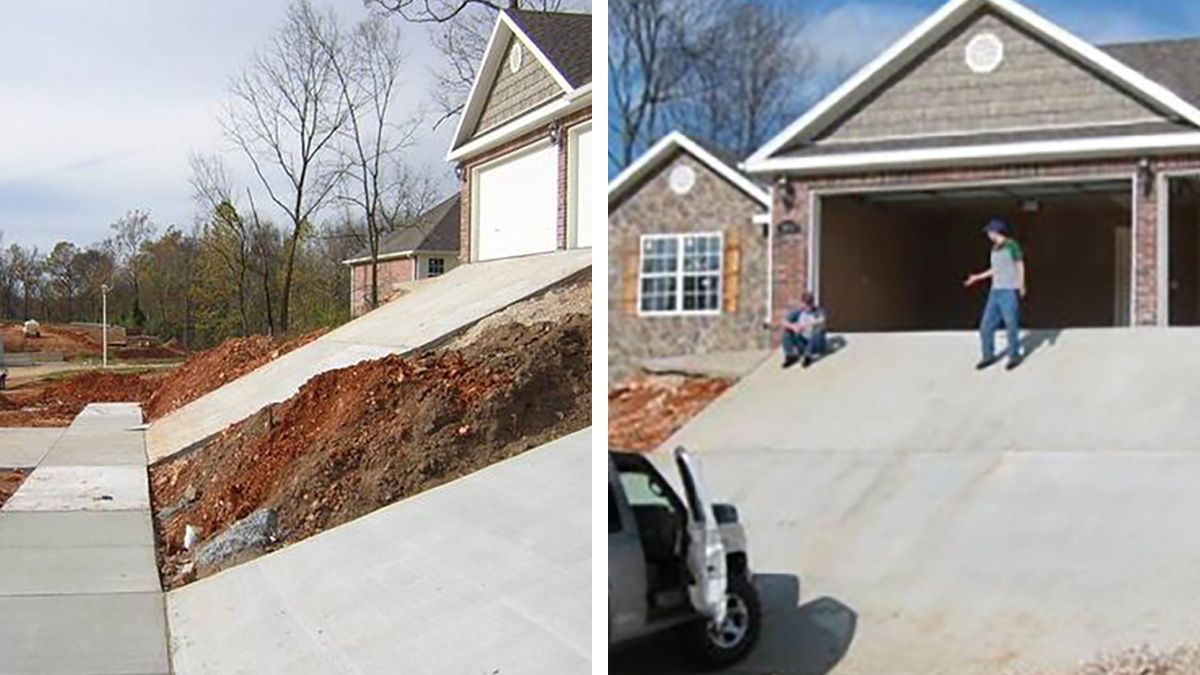 Photos of a steep driveway have been going around on the internet for years for how close a sidewalk appeared to be to the top of the driveway. (Image Via Reddit, Imgur)

In December 2021, an online advertisement appeared to display a picture of two contractors on a steep driveway as they prepared to drive a gray SUV from the sidewalk to the top. It led to a 43-page slideshow article. Nearly six years earlier, a commenter on Reddit asked: "Out of curiosity, is there like a Snopes article or something?"

According to our research, this was a real photograph. We also found details on the history of the pictures and even an update on the situation.

Pictures of the Steep Driveway

One of the most commonly shared pictures of the steep driveway that showed up on Reddit again and again was the following side view. It was often captioned as "contractor of the year": This photograph showed the distance between the sidewalk and the street.

Other pictures of the same steep driveway were also posted online: This was the full-size picture from the ad. A second photograph showed the SUV begin to make the climb. The neighborhood's new homes were under construction in the background. It's unclear who captured the photographs. Another picture of the home showed the unusual distance between the street and the sidewalk.

According to information on old message boards including garagejournal.com, cyburbia.org, and city-data.com, the home is located at 5028 New Bridge Road in Fayetteville, Arkansas.

Zillow.com published that the home was built in 2003 and was first purchased in 2004, meaning that the pictures likely dated to late 2003.

While the pictures were real, the driveways on the street have since been redone. According to updated photographs from Google Maps Street View, the sidewalk was later reconstructed to be closer to the street.

In fact, Google Maps even showed where the sidewalk was curved to give more room for the driveways to not be so steep: The red circle shows how the sidewalk was fixed to be closer to the street. (Courtesy: Google Maps)

We also looked at historical satellite imagery on Google Earth Pro which showed that the moved sidewalk appeared to help fix three houses from having potentially dangerous driveways: The red circle shows that the driveway was extended and the sidewalk was moved closer to the street.

On the garagejournal.com message board, a user shared this memory which seemed to line up with what happened:

A person on another forum said he had seen it in person. If I remember correctly he was an engineer or construction manager for the housing development.

He said the angle of the photo made it look worse than it really was, but the driveways were still way too steep. They ended up tearing it all out and regrading the street higher so the driveways would work.

In sum, it was true that the photos showed a real and steep driveway that could potentially be described as a contractor mistake. However, by 2004, the driveway was redone after the sidewalk was moved closer to the street.