Remember this tale about a babysitter who makes an unfortunate discovery? 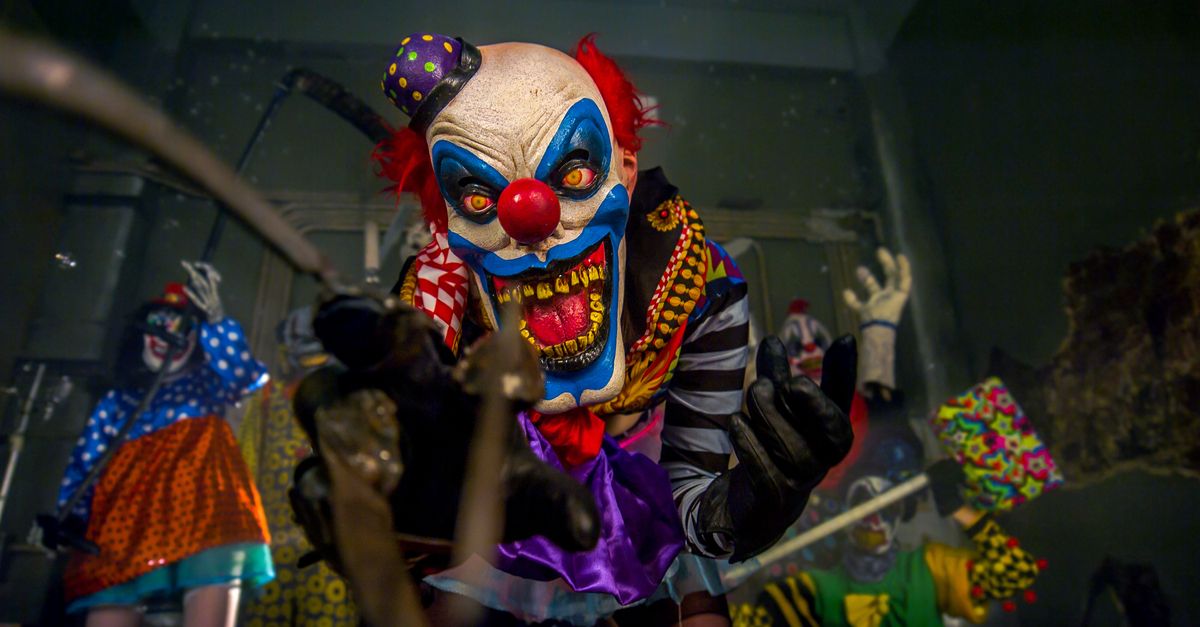 Claim:
A clown statue that spooked a babysitter turns out to be a knife-wielding intruder hiding in the house.
Rating:

In the Spring of 2004, we began picking up versions of the story quoted below, in which babysitter mistakes a knife-wielding intruder hiding in the house she's watching for a clown statue. It exists in two forms: one in which the babysitter appears to be the person at risk, and one where the children are the presumed targets of the lurking man's malice.

A couple with children were trying out a new babysitter. About an hour after they left for a night on the town, they realized they had forgotten to give her their cell phone number, so one of them called her.

After she wrote down the number, the babysitter asked if she could watch satellite TV in their bedroom. She had just put the children to bed and wanted to watch a particular show. (The parents didn't want their children watching too much garbage, so the living room TV did not have satellite channels.)

Well of course she could watch TV in their room, they replied. The babysitter had one other request: could she put a sheet or blanket over the clown statue that was in the bedroom? It kind of made her nervous.

Take the children and go to the neighbors, said whichever parent was talking to her. We'll call the police. We don't have a clown statue.

The police caught the clown as he was running through the neighborhood.

In the stories that feature the clown having been found in the parents' bedroom, the slant of the tale leads readers to assume it is the babysitter, not her charges, that are the predator's primary focus. (The tot-tending teen having been selected as the killer's (next) victim is a key element in another urban legend: the classic "Babysitter and the Man Upstairs," in which the sitter receives a series of disturbing phone calls entreating her to check on the sleeping children and so put herself in the room with the murderer.) Yet in the tellings where the clown statue has been found in the children's room, the object of harm is the youngsters, not the young lady watching over them. Some renditions make the pedophilic element unmistakable by having a frightened child report having been touched inappropriately by something in its room, and others only hint at it via brief closing comments about the captured man having been revealed to be a sexual predator wanted in a number of states.

Significantly, all the tellings we have so far encountered terminate in the bad guy not only running from the house but being captured by the police and so brought to justice. Could this indicate a subtle shift in how safe we as a society feel about our world, in that it now strikes us as right that a scary story complete with the villain giving up his evil plans and running away when confronted with discovery yet even so not being able to elude retribution?

Only rarely does the legend offer any explanation for why the skulking intruder chooses to pass himself off as a statue in preference to just attacking willy-nilly:

A girl is babysitting two little girls while the parents are out for dinner. The girls are sent to go to bed downstairs but they return to the babysitter complaining that a statue is staring at them. They wanted her to cover the statue up so they could go to bed. The babysitter walked downstairs and saw a small clown statue looking at the girls bed. She did not want to break it or anything while she covered it up, so she called the girl's mom. The mom advised her she did not have a small clown statue. Mom further advised to get the girls out of the house and call the cops.The resolution is that the "clown statue" was a midget dressed as a clown who was schizophrenic and in a catatonic state. He had been hid out in the house for a week.

Needless to say, homicidal maniacs and pedophiles have not commonly taken to donning clown costumes and passing themselves off as items of home decor. (Although one famous serial killer, John Wayne Gacy,did sometimes dress as a clown, it was for the purpose of entertaining children at parties and charity events; it was not how he attired himself when torturing and murdering his victims.) Yet lack of real killer clowns to the contrary, a substantial number of folks admit to a sense of disquiet about clowns, and some actually fear them. There is something about the grotesquely exaggerated makeup that inspires a sense of unease, even menace, with this perception remarkably widespread across all age groups. (In St. Louis, a strip mall named the General Grant Center has come to be known as "Scary Clown Plaza" thanks to a 15-foot clown statue erected there. As the local paper said, "We can't put our finger on what accounts for the sinister aura that seems to surround this supposedly jovial fellow, but too many folks from diverse backgrounds have commented on it to just be coincidence.")

Before we entirely dismiss the "killer clown statue" as naught but folklore, it should be noted that there has been at least one verifiable case of such a figure attacking someone. In 1992, in Noblesville, Indiana, a Ronald McDonald clown statue toppled onto a six-year-old girl, severing the fleshy part of her fingertip. The excised piece was reattached, but the child still had a malformed fingernail. She was awarded damages of $41,400.

If the sight of clowns causes the hairs on the back of your neck to rise, not only aren't you alone, but there are online communities populated by folks who share your sense of unease: ihateclowns.net and Clownz.com are two such places. On the flip side of the coin, if you've an interest in hiring a clown, or in perhaps becoming one yourself, Clowns of America and Clowns International are worth a visit.