Did a Starbucks Employee Add the Word 'Pig' to a Police Officer's Order?

A Starbucks in Glenpool, Oklahoma, become the center of controversy in late 2019. 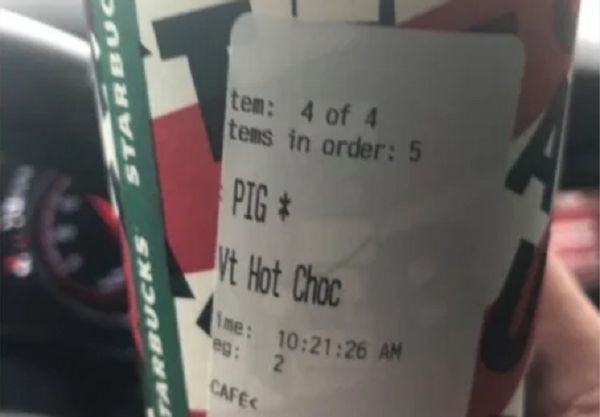 Claim:
A Starbucks barista in Glenpool, Oklahoma, added the word "pig" to a police officer's order label in November 2019.
Rating:

In late 2019, we received multiple inquiries from readers about a controversy surrounding a Starbucks location in Glenpool, Oklahoma, where a barista had reportedly insulted a local police officer by adding the word "pig" to his order label.

The incident attracted widespread attention from news media, including reports by local TV station KTUL, and was covered by national news organizations including The New York Times:

An Oklahoma police officer working on Thanksgiving made a Starbucks run for emergency dispatchers to thank them for working during the holiday. When he got his order, he said, he saw the word “PIG” printed on a cup’s label.

The officer, a member of the Kiefer, Okla., police department, took the order to the dispatchers and contacted the police chief, Johnny O’Mara, who was on vacation at the time, according to Jory Mendes, a Starbucks spokesman.The word “PIG” was printed on all five cups, KTUL-TV reported.

When Chief O’Mara called the Starbucks, in Glenpool, Okla., the manager offered to reprint the cups, which the chief said was an insufficient apology, the station reported. The officer told the station that the barista contacted him, apologized and said it was meant as a joke. Those reports were accurate. In a statement published on Nov. 29, Starbucks confirmed that they had fired the barista who added the word "pig" to the order label:

This is absolutely unacceptable, and we are deeply sorry to the law enforcement officer who experienced this. We have also apologized directly to him and connected with the Chief of the Kiefer Police Department as well to express our remorse. The Starbucks partner who wrote this offensive word on a cup used poor judgement and is no longer a partner after this violation of company policy.

Starbucks confirmed to Snopes that the barista had been fired after an internal investigation and that Lola Price, a shift supervisor at the Glenpool location, had also been fired for her role in the incident and for violating company policy.

According to multiple reports, the barista who added the word "pig" to the label called the officer in question and apologized, saying it had been intended as a joke.

One theory shared widely online had been that a profanity filter on Starbucks' computer system meant an employee could not have added a word such as "pig" to the order label, and that therefore the police officer himself must have used that name when ordering the drinks through the Starbucks app: However, that theory was incorrect. When an order is placed through the Starbucks app, the resulting order label displays the word "Mobile" at the bottom, as shown below: When an order is placed at the counter inside a Starbucks branch, the order label displays the word "Cafe" on the bottom, as shown here: In the case of the Kiefer police officer's order, the label clearly showed the word "Cafe" at the bottom, meaning he must have placed his order at the counter and not through the Starbucks app: