Were Starbucks Charity Food Donations Left in a Dumpster?

We reached out to both Starbucks and Feeding America to ask about a viral tweet that supposedly showed discarded food meant for people in need. 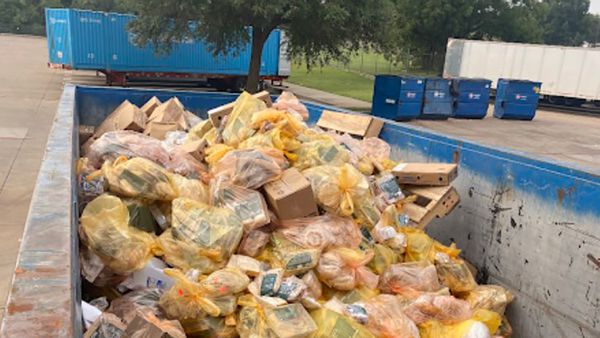 A tweet from Laila Dalton said that food-share or FoodShare bags that Starbucks supposedly donates were found in a blue garbage dumpster in Grand Prairie, Texas. (Image Via @lailaddaltonn (Twitter))

Claim:
A picture shared to Twitter shows food donations for Starbucks' FoodShare program left in a dumpster in Texas.
Rating:

In order to learn the facts behind the picture, we reached out with several questions for Dalton, Starbucks, and the Feeding America charity. Feeding America partners with Starbucks on what's known as FoodShare, a program that provides food for those in need. We received information from Dalton and Starbucks but are still awaiting a response from Feeding America.

We have so far found no information that could conclusively identify the items seen in the dumpster in the photograph, nor did we locate details that would explain why the bags were thrown away.

During our investigation, we learned that the picture was not recent. We were told that it was not captured behind a Starbucks store, something some users may have believed to be the case after glancing at the photograph. In fact, we received information from a Starbucks company spokesperson who said that local officials who represent Feeding America in Grand Prairie told them that they knew of no issues with recent daily deliveries. They also reiterated the positive impact of its FoodShare program on a national scale. Here's what we know.

According to the tweet's caption, the picture of the garbage dumpster that supposedly contained Starbucks FoodShare food donations was taken in Grand Prairie, Texas. However, little else could be gathered from just the text and photograph. A reverse image search showed that the picture appeared to not show up publicly online until Dalton tweeted it on June 11.

By email, Dalton told us that she did not take the picture, but said it was captured by an "anonymous past partner" around 7 p.m. on Aug. 3, 2021. That made the photograph somewhat close to a year old by the time it was tweeted on June 11, 2022.

According to Dalton, the location of the dumpster in the photograph that purportedly contained Starbucks FoodShare program donation bags was said to be at a building occupied by Penske Logistics. We reached out to Penske Logistics to see if the company handles any distribution for Starbucks in the area, or if that role belonged to a different organization located at the same address. We will update this story if we receive a response.

The tweet received well over 200,000 total retweets and likes in just 48 hours. For those unfamiliar with Twitter, this was an extremely massive amount of people engaging with the tweet. The tweet was also shared as a screenshot on Reddit, where it received more than 18,000 points. This was likely enough positive interaction (upvotes) to land the post on the website's front page.

In 2016, Starbucks partnered with the Feeding America charity on a program called FoodShare. According to a Starbucks company spokesperson with whom we spoke over the phone, the FoodShare program's process begins when refrigerated trucks pick up the unsold food from stores. That food is then delivered so that it can be distributed by Feeding America to people in need.

The spokesperson added that the FoodShare program has helped to deliver more than 36.8 million meals nationally to those in need since it started six years earlier. Perhaps more important was that Starbucks said that, regarding the picture of the dumpster, people who represent Feeding America in the Grand Prairie area said that daily deliveries were being received and there were no known issues, as of early June 2022.

According to a 2021 presentation that's hosted on the Starbucks website, the company donates unsold food from "100% of its U.S. company-owned Starbucks stores."

The document also broke down the donation process into three main steps:

Instead of being thrown away, unsold food is rescued and donated to the Feeding America network of food banks and agencies to get into the hands of those who need it most.

Per the U.S. Enhanced Tax Deduction, companies receive a financial benefit for pounds of food donated, which can be used to fund backhaul logistics for food rescue.

According to the presentation, the tax benefit received by Starbucks from its FoodShare program is used to self-fund the initiative.

This story will be updated if we receive any further information about the picture of the dumpster.