An old, false claim was resurrected in a new blog post with the same basic, factual errors. 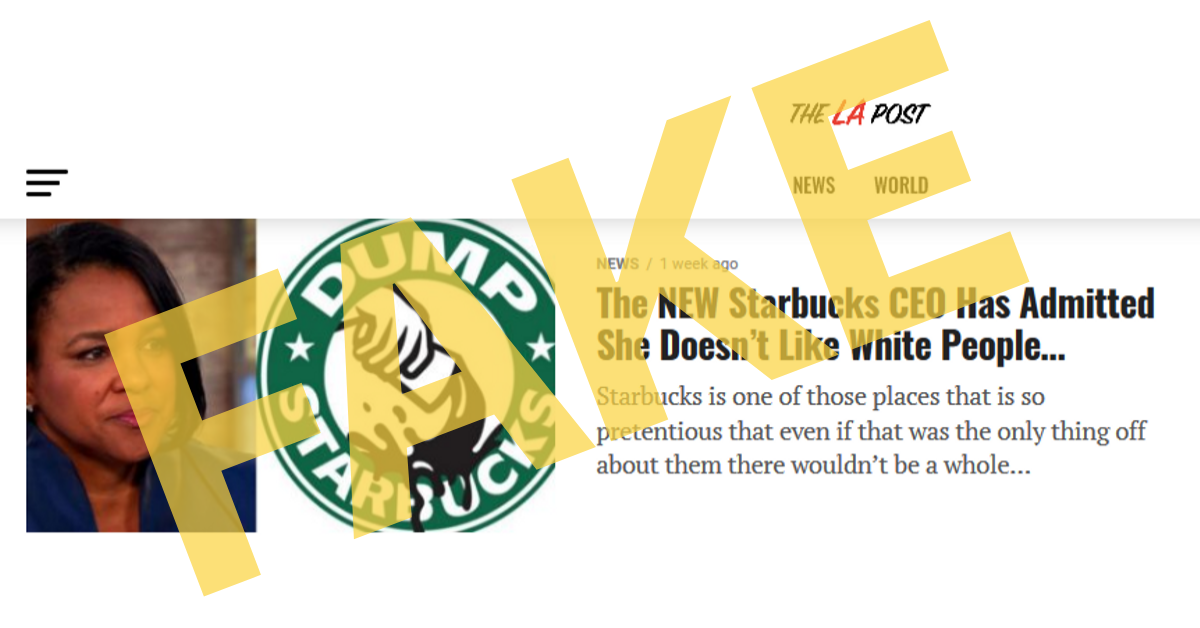 In October 2019 Snopes readers inquired about a headline published by The LA Post: "The NEW Starbucks CEO Has Admitted She Doesn’t Like White People … ."

The blog post attached to that headline appears to have recycled a variation of an old claim that we identified as "False" in November 2018.

The new post again took issue with an anecdote that Starbucks executive Rosalind (Roz) Brewer shared in this 2015 CNN interview (transcript below):

Poppy Harlow: You are a rarity in the corner office in America, and it is something that so many people want to see change. Not only are you a female CEO, you are a minority CEO. Where do you fall on who has to make the change and how it is going to happen, so that there are more women like you represented in the top echelons of corporate America?

Rosalind Brewer: I totally agree with you, but it starts with the top of many companies, it has to start with top leadership. I can tell you that, even with myself, I have to live it also. My executive team is very diverse and I make that a priority. I demand it of my team and within the structure, and then every now and then you have to nudge your partners, you have to speak up and speak out, and I try to use my platform for that, to remind people. I try to set an example, I mentor many women inside my company, and outside the company, because I think it’s important.

Harlow: And in hiring, do you demand it [diversity] when you’re hiring for the top spots?

Brewer: Absolutely, and not only that, I talk to my suppliers about it. Just today, we met with a supplier and the entire other side of the table was all Caucasian male — that was interesting.

Harlow: What did you say?

Brewer: Well I decided not to talk about it directly, with his folks in the room, because there were actually no females, levels down. So I’m going to place a call to him.

We rate the newer variation of the claim as "False" also because nowhere in her account does Brewer mention a dislike of anyone, let alone all white people.

It is also worth nothing that the post (again) misidentified Rosalind Brewer as the new CEO of Starbucks, when she is actually the company's Chief Operating Officer (COO) and has been for two years. Kevin Johnson has been Starbucks' CEO since 2017. Before working at Starbucks, Brewer served as president and CEO of Sam's Club, which was her title at the time of the interview in question.