Starbucks Dreamer Day was a hoax concocted on 4chan's /pol/ forum as a way to drive a wedge between liberal groups. 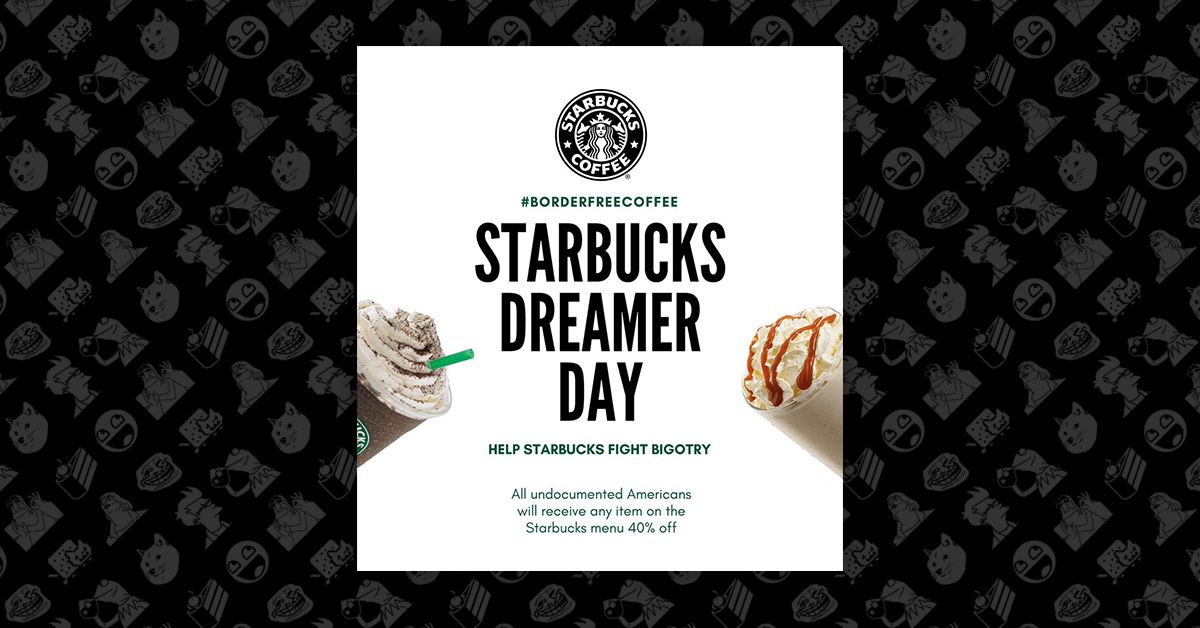 Claim:
Starbucks is giving a discount to undocumented immigrants on 11 August 2017.
Rating:

On 2 August 2017, images advertising "Starbucks Dreamer Day," indicating that the coffee chain planned to give a deep discount to undocumented immigrants circulated on social media:

Proud of @Starbucks for standing up to @realDonaldTrump. #borderfreecoffee #Immigrant #DREAMER pic.twitter.com/q1gmct8roL

@Starbucks Is this legit? pic.twitter.com/5uGpUAqQ2H

Other iterations said the "Dreamer Day" would take place on 10 September 2017:

By 4 August 2017 @Starbucks began responding to shares of iterations of the image, denying any such promotion existed and asking Twitter users about the origins of the rumor:

Michael, this is completely false. Starbucks is not sponsoring any such event. Where did you get this image?

We’re sorry you’ve been completely misinformed. Starbucks is not sponsoring any such event. How did you hear this information?

The second Starbucks tweet quoted was a response to a since-deleted tweet sent by @MariaChavez88, an account created on or around 3 August 2017 (almost certainly to seed the rumor on Twitter). Its second tweet was about the purported promotion, and its first about tacos:

My auntie made some fire tacos! So glad she could come visit pic.twitter.com/ZON4lDzo3z

The image of "fire tacos" made by the user's "auntie" was swiped from recipe site Yummly.

Even after the company denied the reports, pranksters continued to push the rumor:

Just confirmed with local Starbucks managers. They have chosen to honor Dreamer Day at all metro-Detroit Starbucks. #BorderFreeCoffee

Before long, the claim inspired a second rumor that the first was a ruse to lure undocumented immigrants to central locations on a specific date. A 3 August 2017 thread posted to the DREAM Act forum warned:

There is a flyer going around from 4chan stating we get free GRANDE cold beverage.

Do not fall for it, their plan is to trick us into going and have them call ICE. Please be careful.

On 2 August 2017, users of 4Chan's /pol/ forum apparently concocted the phony Starbucks Dreamer Day promotion, as way to get "all illegals to go at once and demand free stuff" at a "liberal place." Commenters immediately suggested calling Immigrations and Customs Enforcement (ICE) as well. But the original concept was floated simply as a way to drive a wedge between various liberal factions:

How about we meme “Undocumented Immigrant Day” at Starbucks into existence? Announce free coffee for all illegals on a certain date. August 11? 11 looks like II (for Illegal Immigrant). I’m open to suggestions there. Name a liberal place for all illegals to go at once and demand free stuff.

And then call ICE?

I like it. Could cripple their business a bit.

My other idea is to get rainbow flag businesses to do the same thing. Get Milo or someone like that to film them so they can be shamed when they decline to take part. Drive the wedge between liberals and gays. Some gays are super liberal and want refugees. Some aren’t stupid and know the refugees want to murder gays.

The 4chan/pol/ forum has been the source of a number of media hoaxes and social media pranks, typically designed to sow discord among liberals and progressives (or to simply get media outlets to report their claims as legitimate phenomena). Prior hoaxes hatched on /pol/ included claims that a black McDonald's worker named Bubba Conroy spit in white peoples' food; that Hillary Clinton's campaign started a "#DraftOurDaughters" initiative; and that individuals were identifying as "clovergender."  The hoaxes targeted what /pol/ users believed was political correctness, attempting to agitate social media users with rumors about race, gender identity, feminism, democratic socialism, and immigrants.