Did a Struggling Sylvester Stallone Sell His Dog for $25?

Sly reportedly sold his dog for $25 to make ends meet before hitting it big with 'Rocky,' then bought it back for $15,000. 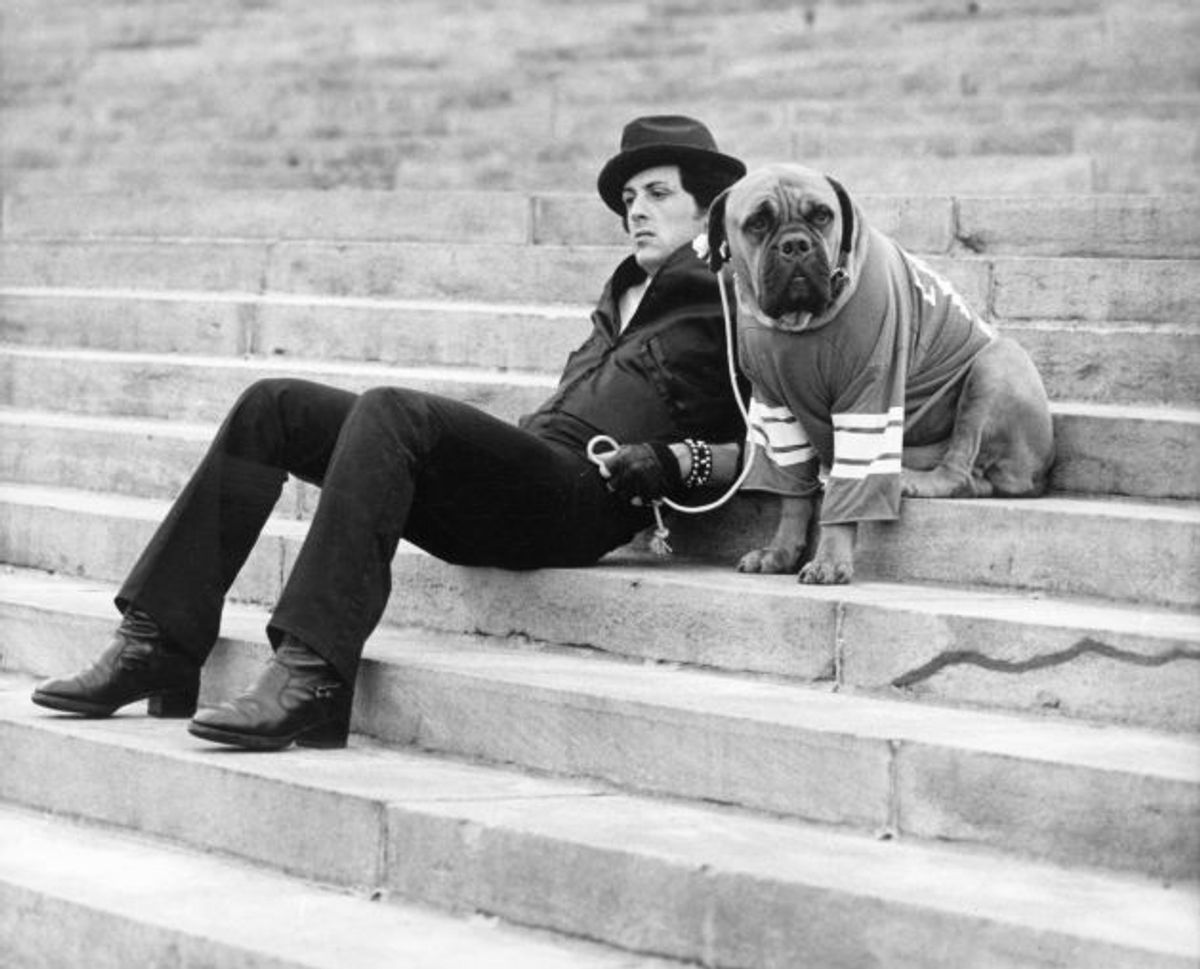 Claim:
Sylvester Stallone sold his dog for $25 to make ends meet before hitting it big with Rocky, then bought it back for $15,000.
Rating:

In July 2015, an attention-grabbing story about the early days Sylvester Stallone's acting career began circulating online via Facebook. While the story touched on several fascinating tidbits of Stallone's life (e.g., he was homeless before managing to sell the screenplay for Rocky) the section garnering the most attention had to do with Sly and his dog:

This is one of the SADDEST stories ever told in Hollywood. His name is Sylvester Stallone. One of the BIGGEST and Most famous American Movie superstars. Back in the day, Stallone was a struggling actor in every definition. At some point, he got so broke that he stole his wife's jewelry and sold it. Things got so bad that he even ended up homeless. Yes, he slept at the New York bus station for 3 days. Unable to pay rent or afford food. His lowest point came when he tried to sell his dog at the liquor store to any stranger. He didn't have money to feed the dog anymore. He sold it at $25 only. He says he walked away crying.

Two weeks later, he saw a boxing match between Mohammed Ali and Chuck Wepner and that match gave him the inspiration to write the script for the famous movie, ROCKY. He wrote the script for 20 hours! He tried to sell it and got an offer for $125,000 for the script. But he had just ONE REQUEST. He wanted to STAR in the movie. He wanted to be the MAIN ACTOR. Rocky himself. But the studio said NO. They wanted a REAL STAR.

They said he "Looked funny and talked funny". He left with his script. A few weeks later,the studio offered him $250,000 for the script. He refused. They even offered $350,000. He still refused. They wanted his movie. But NOT him. He said NO. He had to be IN THAT MOVIE.

After a while, the studio agreed, gave him $35,000 for the script and let him star in it! The rest is history! The movie won Best Picture, Best Directing and Best Film Editing at the prestigious Oscar Awards. He was even nominated for BEST ACTOR! The Movie ROCKY was even inducted into the American National Film Registry as one of the greatest movies ever!

And do You know the first thing he bought with the $35,000? THE DOG HE SOLD. Yes, Stallone LOVED HIS DOG SO MUCH that he stood at the liquor store for 3 days waiting for the man he sold his dog to. And on the 3rd day, he saw the man coming with the dog. Stallone explained why he sold the dog and begged for the dog back. The man refused. Stallone offered him $100. The man refused. He offered him $500. And the guy refused. Yes, he refused even $1000. And, Believe it or Not, Stallone had to pay $15,000 for the same, same dog he sold at $25 only! And he finally got his dog back!

The story of Sylvester Stallone's film career and the Rocky film franchise is commonly been reported as a quintessential American rags-to-riches tale, as exemplified by this 1976 New York Times review of the first Rocky film:

A year ago, Sylvester Stallone had $106 in the bank. His wife was pregnant, his bull mastiff was starving and he couldn't pay the rent on his seedy Hollywood apartment. What to do?

Well, one answer was that Stallone, a sometime actor-turned-screenwriter, could sit down and in 3-1/2 days write a screenplay with a meaty starring role in it for himself, persuade someone to film it, and wind up a millionaire. Improbable? Pessimists might say so, and advise Stallone to try something more sure, like the Irish Sweepstakes. Impossible? Well, no, because you see, there's this new movie, called "Rocky."

That's Stallone up there as "Rocky," Rocky Balboa, a tender-hearted, down-and-out Philadelphia club fighter known as "The Italian Stallion," who almost becomes heavyweight champion of the world. And the words Stallone is mouthing on screen are the words he wrote in 3-1/2 days and sold to producers Irwin Winkler and Robert Chartoff on the condition that he would play "Rocky," and not Burt Reynolds, or James Caan, or Ryan O'Neal, who were being mentioned for the part.

The film was shot in 28 days ("The gestation time for a water bug," Stallone says wryly), on a shoestring $1 million budget, and now, with critics split down the middle with some raving and other deploring, and United Artists predicting "Rocky" will gross more than $40 million, Stallone is finally smiling. You see, he has 10 percent of "Rocky."

According to some other sources, however, that backstory was nothing more than a public relations tale cooked up by United Artists (UA); a creation myth fabricated in keeping with Rocky's theme of the underdog triumphant:

"We came up with a tremendous publicity campaign,” recalled Gabe Sumner, then head of marketing at UA. "It was about how this unknown guy named Sylvester Stallone walked into our office with a script and the company was prepared to buy the script, but Stallone said, 'I'm not going to sell it to you unless I star in the film.' And we (supposedly) said, 'No way.' And he said, 'Well, you can’t have the script.' And we said, 'We will give you $18,000.' And that was the figure we used. And a deal was made and Stallone could star in this film which he wrote. And he got all of $18,000. Now is this true? It was horsesh*t! But it worked. It promoted the whole underdog concept and kept on going."

"I don't have to tell you how the press feeds on the underdog story," said Sumner. "It filled up space on entertainment pages, and in columns looking for something for the next day. They ate up the idea that this actor loved his work so much, and was willing to sell it for a nickel and a dime in order to make it, blah, blah, blah. It all became part of the underdog fabric that brought people in. Period. They just totally bought into it."

According to an interview he gave in 2013, Stallone was so broke before he managed to sell his Rocky script that he had to raise cash by selling his dog Butkus (who later appeared in the first two Rocky films) for $50 outside of a liquor store:

Q: Is it true that, before Rocky, you were so broke that you sold your dog?

A: Yeah, I sold my bull mastiff Butkus to a little person. [Turns to his publicist] You can’t use the word ‘dwarf’ any more? Let’s just say a little person. I tied my dog up at the store with a sign that said a hundred bucks. I got $50 from this guy called Little Jimmy.

Q: This is the same dog that appeared in Rocky, right?

A: Yeah. When I sold the Rocky script, I went to see Little Jimmy and begged for the dog back. He lined up his children [Stallone mimes crying], “Oh my kids love the dog.” I said, “You’ve only had him for a f*ckin’ week!” He wanted to fight me and he said he was gonna kill me — he was a crazy little person! I couldn’t fight him — they’d arrest me — so I offered to pay double. Anyway, $3,000 and several threats later ...

Q: What happened to Little Jimmy?

While it's certainly possible this anecdote is true exactly as Stallone told it in 2013, we're still a bit skeptical. The details of this story vary quite a bit from telling to telling, and although numerous articles published in the wake of Rocky's release in late 1976 touched on Stallone's straitened financial circumstances prior to the film's tremendous box office success, we've haven't yet found any that mentioned his having sold his dog and then repurchased it at a much greater price.

Also, given that Stallone was supposedly living hand-to-mouth prior to selling his Rocky screenplay and had no idea whether his low-budget film (whose release was still over a year away) would bring him any additional money, his spending several thousand dollars to reclaim Butkus at that point sounds rather extravagant (although many dog lovers might claim that no price is too high to regain a beloved pet). So we're marking this one as a "legend" until we can turn up a confirming source for it other than a long-after-the-fact interview.