Here is the evidence we gathered after readers asked us to confirm whether this viral tweet was true. 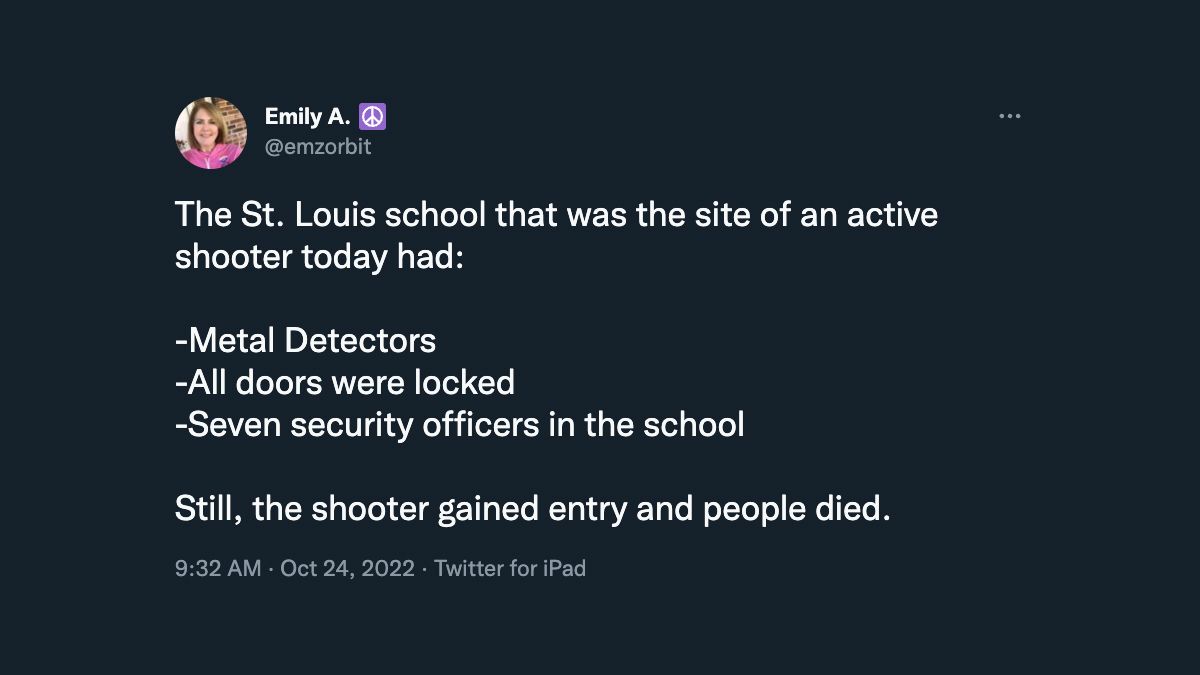 The Oct. 24, 2022, deadly shooting in St. Louis took place at a high school that had metal detectors, locked doors, and seven security officers working in the building. (Image Via Twitter)

Claim:
A deadly shooting in St. Louis on Oct. 24, 2022, took place at a high school that had metal detectors, locked doors, and seven security officers working in the building.
Rating:

On Oct. 24, 2022, Twitter user @emzorbit tweeted, "The St. Louis school that was the site of an active shooter today had metal detectors, all doors were locked," and said that "seven security officers in the school," yet "still, the shooter gained entry and people died." All of this was true in the case of the deadly shooting that took place on the same day at Central Visual and Performing Arts (CVPA) High School.

In addition to receiving tens of thousands of retweets and likes, it was also widely shared as a screenshot on Instagram, Reddit, and elsewhere.

The shooting resulted in the deaths of a teacher and student, The Associated Press reported. Seven other students were also wounded before the shooter was gunned down by police officers who had arrived on the scene:

A 19-year-old who killed a teacher and a 15-year-old girl at a St. Louis high school was armed with an AR-15-style rifle and what appeared to be more than 600 rounds of ammunition, a police official said Tuesday.

During a news conference on the day of the shooting, George Sells, the director of communications and marketing for Saint Louis Public Schools, spoke about seven security personnel who were working in the building at the time the shooting began. This information confirmed part of the viral tweet.

Michael Sack, the interim commissioner for the St. Louis Police Department, also said at the same news conference that, "Not all of the public safety school security officers are armed." In the same answer, he confirmed that the doors were locked and that the school was equipped with metal detectors:

They've got the doors locked. They've got the metal detectors. They're taking all the reasonable precautions. We'll be meeting with them after we have some time to talk about opportunities to make their facilities harder to get into. But if there's somebody who has a will, they're going to figure it out. We don't want to make it easy for them, but we've just got to do the best we can to extend that time it takes them to get into the building to buy us time to respond and get there.

Sack's comments begin at the 8:58 mark in the following video. The remarks from Sells start at the 16:29 mark.

Reuters reported the same information from the news conference, publishing that "the high school had seven security officers on site and metal detectors," and that "the security officers were not armed." The story also mentioned that the doors to the St. Louis school were locked, just as Sack said.

In sum, yes, the school in question in the St. Louis shootings was equipped with metal detectors, all doors were locked, and seven security officers were already present when the deadly shooting began to unfold.