Displaying this giant murder doll can't be good for business. 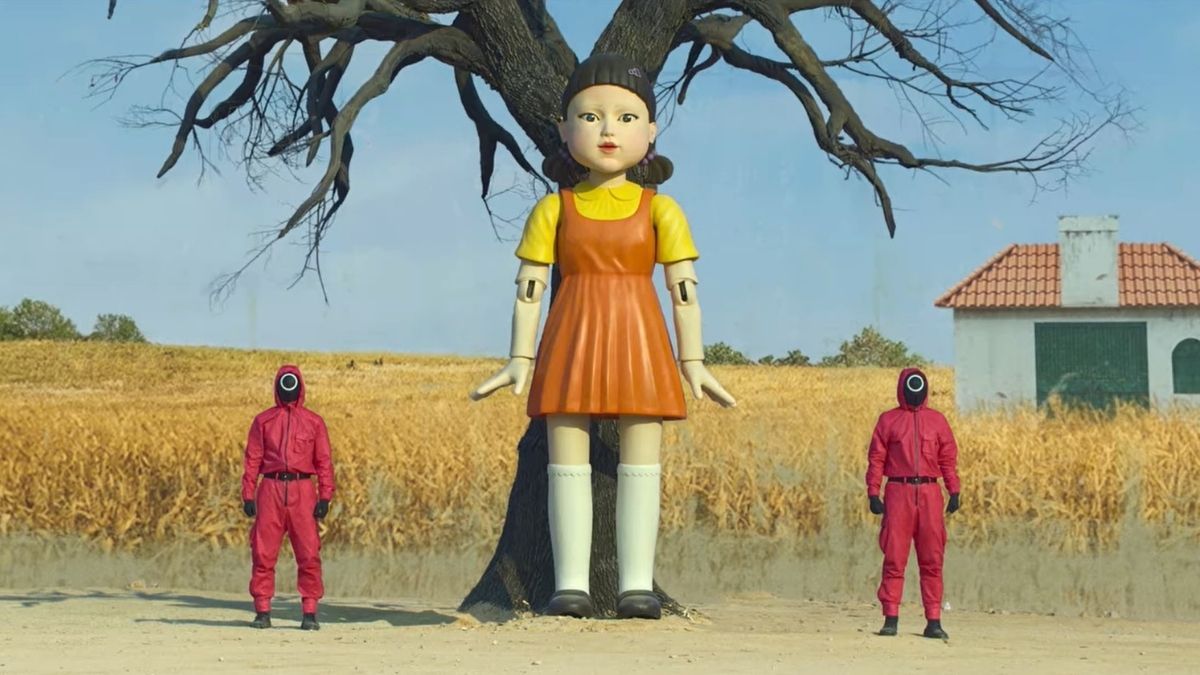 Claim:
The giant robotic doll from the TV show "Squid Game" was lent to the production team by a small carriage museum in South Korea.
Rating:

A photograph truly shows the "Squid Game" doll at a carriage museum in South Korea. However...

This doll was created as a prop for the TV show. After production wrapped, the doll was briefly exhibited at a museum in South Korea before being put away into storage.

In the opening episode of "Squid Game" (this article contains early episode spoilers of the popular Netflix show), the contestants participate in a deadly version of a children's game called Red Light, Green Light. As they attempt to cross the room during the green light portions of the game, a giant, mechanical doll surveys the room to make sure that nobody moves during the red light portions of the game. And, if they are caught moving, well, here's a clip from the scene.

In mid-October 2021, about a month after the release of "Squid Game" on Netflix, photographs started to circulate on social media that supposedly showed this green light, red light doll on display at what appeared to be a rural farm in South Korea. One popular post on Reddit claimed that the "the giant doll in 'Squid Game' wasn't actually a prop and that it "actually belonged to the horse carriage village in Jincheon County in Chungcheongbok-do, South Korea." The post went on to say that the doll was lent to the production team of "Squid Game" and that it had just "returned after filming."

This is a genuine photograph of the "Squid Game" doll at a carriage museum in South Korea. However, this doll does not belong to the museum, and it wasn't borrowed for the production of "Squid Game." This is a prop that was designed for the show. After production ended, the doll was briefly exhibited at this museum.

In a "Behind the Scenes" video from Netflix, one of the filmmakers explains that they "referred to the illustrations of Cheolsoo and Younghee" from school textbooks when they created the doll. Koreaboo notes that American audiences might compare Cheolsoo and Younghee to "Dick and Jane," two characters that frequently appeared in educational material.

According to Hankook Ilbo, a South Korean news outlet, the production company that made the doll was planning to temporarily store the prop at this museum, but due to a "communication error," it was put on public display. The carriage museum wrapped the doll in plastic to hide it, and then moved it into storage.

On September 27, 2021, the museum posted a brief update saying that the exhibition had ended, and that the doll was no longer on display. Translated via Google: "Hello. I am the manager of the carriage museum. Notice about the 'Squid Game' doll. It is not currently on display."

A Netflix official told Maeil Business Star Today on the 1st, "The doll used as a prop for the movie was exposed to the public for a while before being stored. The doll will be stored in the warehouse at a later date.” When asked about the release of the Tagger doll, he said, "There are no plans for a separate exhibition at this time."

Here are some additional photos of the "Squid Game" doll when it was displayed at this museum.

kublakhan1977. “The Giant Doll in ‘Squid Game’ Isn’t a Prop. The Doll Actually Belonged to the Horse Carriage Village in Jincheon County in Chungcheongbok-Do, South Korea. The County Has a Village and Museum for Horse Carriages Called ‘Macha Land’. The Doll Was Returned after Filming and Stands near the Entrance.” R/Interestingasfuck, 12 Oct. 2021, www.reddit.com/r/interestingasfuck/comments/q69vu7/the_giant_doll_in_squid_game_isnt_a_prop_the_doll/.