Can a Chemical in Spicy Peppers Help Cure Breast Cancer?

Capsaicin does have cancer fighting properties in the lab, but its use as an anti-cancer therapy in humans is far from certain. 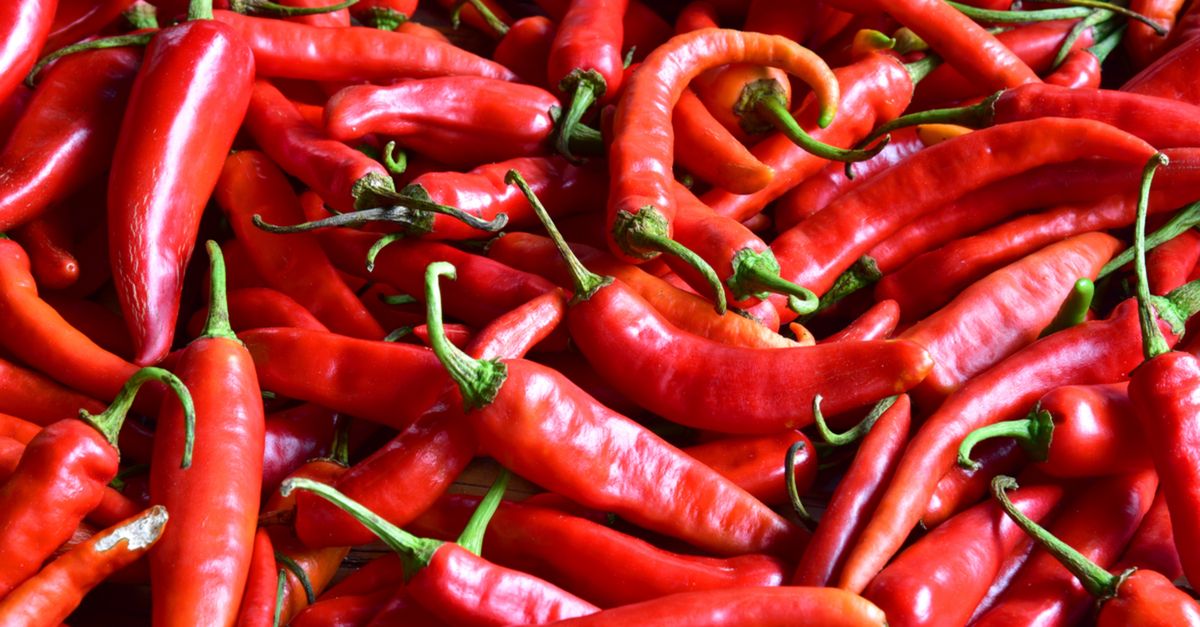 On 13 December 2016, a team of researchers from Germany published a study that both hypothesized a mechanism by which capsaicin (the chemical in chili peppers responsible for their spiciness) could combat breast cancer cells, and also demonstrated its potential on a cell line representative of the most aggressive form of breast cancer.

The researchers’ hypothesized mechanism (based on previous research on the chemical) was that capsaicin modulated a specific chemical pathway, called a transient receptor potential (TRP), known to induce cell apoptosis (in other words, death).

There were only two TRP channels expressed in every tissue sample, namely TRPM7 and TRPV1. Because TRPM7 is known to be expressed in a large number of different other cell types, it could not be considered a suitable, specific target for cancer therapy. In comparison, TRPV1 is not expressed in such a broad range; furthermore, it is associated with breast tumor growth inhibition.

The researchers then tested the ability of capsaicin either to kill or inhibit the growth of a specific cell line representative of the most aggressive form of breast cancer:

We showed the induction of apoptosis and necrosis upon capsaicin stimulation. [...] This induction led to the suggestion that activation of TRPV1 by specific ligands could significantly enhance breast cancer cell death, even in the most aggressive breast cancer subtype, triple-negative breast cancer. The mechanisms involved leading to apoptosis remain elusive.

It is important to note, however, that the significance of this study’s finding wasn’t that capsaicin (and by extension spicy peppers) specifically fights breast cancer cells. It was that they identified and described a biological pathway for potential anti-cancer agents to exploit in breast cancer — chemicals that activate the TRPM1 channel:

The current study revealed the expression profiles of human TRP channels in 60 different breast cancer tissues and cell lines and furthermore validated the antitumor activity of TRPV1 against SUM149PT breast cancer cells, indicating that activation of TRPV1 could be used as a therapeutic target.

The use of capsaicin would come with a number of challenges. First, would be the problem of how you get it to the actual location of cancerous cells. The authors stated in a press release that “an intake via food or inhalation [would be] insufficient for this purpose.” So anyone trying to sell capsaicin pills or a whole batch of spicy peppers for anti-cancer purposes would be trying to pull a fast one.

Related to that issue is the problem that capsaicin, at least when ingested, is removed from the body really quickly. In the breast cancer study, the cell lines were exposed to capsaicin for 48 hours. When ingested orally by humans, however, capsaicin likely remains in your bloodstream for less than 90 minutes, as reported in a 2012 study published in Pharmacological Reviews:

A recent study investigated thoroughly the human pharmacokinetic profile of 5 g of orally ingested C. frutescens, equipotent to 26.6 mg of pure capsaicin (this is the equivalent of eating 15 habanero peppers!). The group documented that capsaicin could be detected in plasma after 10 min [...]. After 90 min, capsaicin could not be detected. [...] Oral capsaicin has more relevance to molecular gastronomy than to any therapeutic options.

According to the authors of the above review, intravenous injection of capsaicin is essentially too problematic to consider, as well:

There are, to the best of our knowledge, no reports of capsaicin administered intravenously in humans; given the likely widespread adverse effects, this is just as well.

Another issue is that capsaicin (in the very high concentrations that would be necessary for it to be efficacious, at least) might also produce carcinogens that play a role in other forms of cancer, including colon cancer, gastric cancer, and skin cancer. As reported in a review of the therapeutic uses of capsaicin, these effects may come from byproducts formed from the metabolism of capsaicin:

Studies [...] have shown that capsaicin is metabolized [...] to aromatic and aliphatic hydroxylated products [and other reactive metabolites]. These by-products of capsaicin metabolism may be responsible for its carcinogenic properties.

All told, the potential cancer fighting properties of capsaicin are not all that new, but the discovery of this specific pathway for a capsaicin-like chemical to exploit is an exciting (if extremely preliminary) step in the fight against this extremely common form of cancer.