Did a Southwest Airlines Employee Fly a 'Don't Tread On Me' Flag from Cockpit?

We looked to find the origins of the viral photograph of the Gadsden flag. 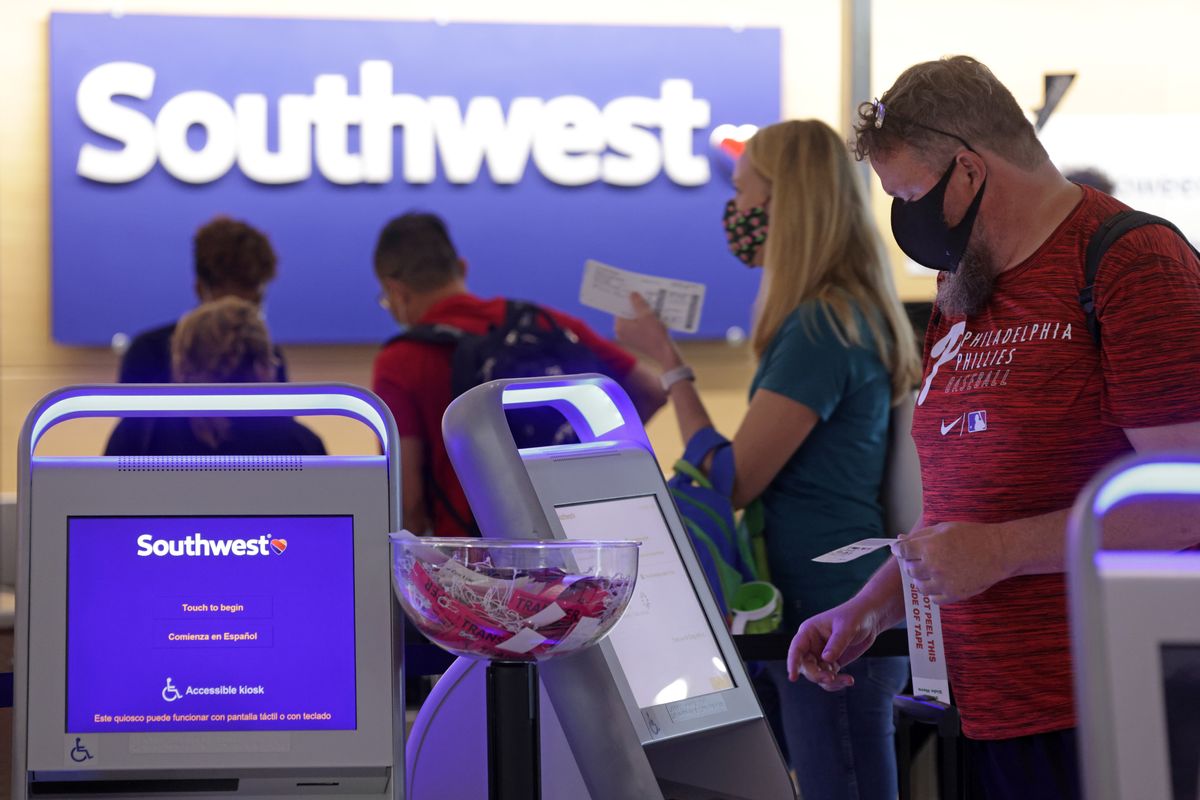 Claim:
A Southwest Airlines pilot or other employee flew a Gadsden ("Don't Tread On Me") flag from the cockpit of one of the company's airplanes.
Rating:

On Oct. 11, 2021, conservative podcaster Benny Johnson tweeted a picture that appeared to show a flag hanging out of a blue airplane. In the tweet, Johnson claimed someone had just sent the photograph to him and that it showed a "grounded" Southwest Airlines airplane flying a yellow Gadsden flag bearing the words, "Don't Tread On Me." The tweet with the flag came around the same time that Southwest Airlines had canceled thousands of flights, fueling rumors that pilots had called out due to news of an upcoming COVID-19 vaccine requirement. Such rumors were spread on social media by prominent personalities, even including U.S. Sen. Ted Cruz, R-Texas, and other politicians and conspiracy theorists.

However, the company stated that "the operational challenges were not a result of Southwest Employee demonstrations," but rather "weather and other external constraints." It also mentioned air traffic control issues.

The Southwest Airlines Pilots Association (SWAPA) also released a statement debunking the online claims. In addition to squashing the rumor that pilots had called out sick because of the vaccine mandate, the union also detailed exactly how weather and "a lack of support" from management played a role in the flight cancellations. The statement cited past "IT failures" that it appeared to link to the October 2021 flight cancellations.

Additionally, the Federal Aviation Administration (FAA) tweeted the following: "To be clear: None of the information from Southwest, its pilots union, or the FAA indicates that this weekend’s cancellations were related to vaccine mandates."

As for the picture of the Gadsden flag with the words "Don't Tread On Me" that was supposedly hung from a cockpit window of a Southwest Airlines airplane by a pilot or employee, we found no evidence with which to confirm its authenticity. In an email, a Southwest Airlines spokesperson told us: "We can’t authenticate details about the image (when/where it was taken, etc.) so we don’t have much information to share."

It's possible that a pilot or employee draped the flag out of the window of a Southwest Airlines aircraft. However, the photograph has no named source, nor can we see the rest of the airplane to verify information on its ownership or location. Further, again, both the company and the pilots' own labor union denied rumors that employees had banded together to call out sick because of vaccine mandates.

According to The Conversation, the Gadsden flag "originated well before the American Revolution, and in recent years it has been used by the tea party movement and, at times, members of the militia movement. But it has also been used to represent the U.S. Marine Corps, the U.S. Navy, the U.S. men’s national soccer team and a Major League Soccer franchise." Its design contains "a coiled rattlesnake on a yellow field with the text, 'Don’t Tread On Me.'"

We reached out to Benny Johnson (who tweeted the photo) for more information to help authenticate the image but did not receive a response. For all of these reasons, on Oct. 14, we changed the rating from "Research In Progress" to "Unproven."

On Oct. 14, this story's rating was changed from "Research In Progress" to "Unproven." We did not hear back from Benny Johnson, the podcaster who tweeted the photo.