Do These Pics Really Show Green Skies During a South Dakota Storm?

Not all photographs need filters to appear moody. 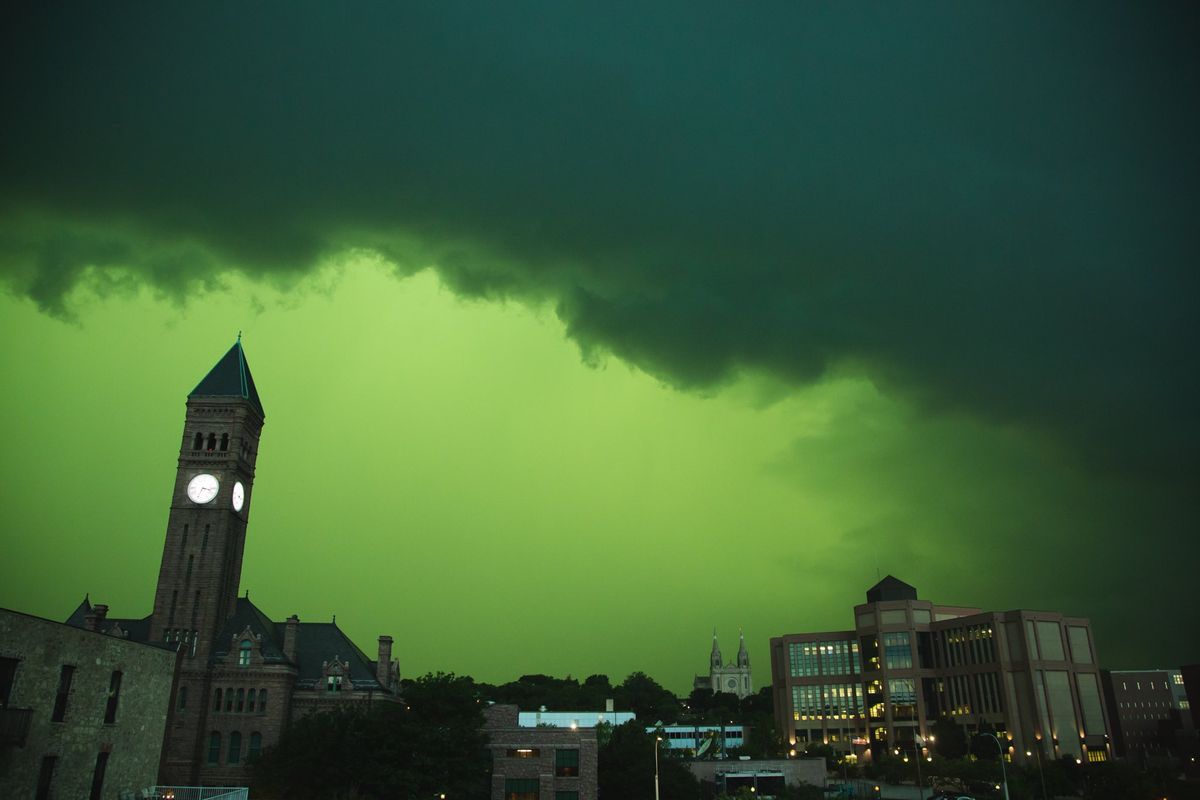 Claim:
Photographs that surfaced in July 2022 were authentic depictions of green skies over parts of South Dakota during a severe thunderstorm.
Rating:

During a large storm system that blew across the state with winds reaching over 80 mph in some areas, skies turned an eerie hue of green, and social media users shared pictures of the phenomenon seemingly in awe. They were not the work of digital filtering effects or editing.

South Dakota Public Broadcasting Radio reported on July 5 that high winds, heavy rain, and hail accompanied the green skies after a large line of thunderstorms from the west moved over the Mount Rushmore State.

"We had a lot of reports of 40 to 60 mile an hour winds ahead of the storm, but we did have some 60 to over 90 mile an hour winds that occurred right behind the line of storms," Mike Gillispie, a hydrologist with the National Weather Service (NWS) in Sioux Falls, told the publication.

Categorized as a derecho, the long-lived windstorm included dangerous winds and prompted severe thunderstorm and flash-flood warnings in parts of the state, the NWS said. Hail the size of golf balls and tennis balls fell from the sky, reported Fox Weather.

Moisture in the storm system caused the green skies. Light from the sun is scattered by particles in the air that appear blue during the day. As evening rolls around, the sun approaches the horizon at a lower angle to create the reddish colors associated with sunsets.

Because thunderstorms typically occur later in the day, skies can look like the above-displayed images because storm clouds' water droplets can scatter blue light particles from the sun that, when illuminated by the red light of a sunset, appear green, according to the University of Wisconsin-Madison.

“Water/ice particles in storm clouds with substantial depth and water content will primarily scatter blue light. When the reddish light scattered by the atmosphere illuminates the blue water/ice droples in the cloud they will appear to glow GREEN,” noted the NWS in North Platte, Nebraska.

“It takes a tremendous amount of water content within the cloud to achieve this color, which usually means a substantial amount of ice (large hail) has to be present!”

Green skies can be a warning that large hail or a tornado is present.

Curiosities: Why Does the Sky Turn Green before a Tornado? https://news.wisc.edu/curiosities-why-does-the-sky-turn-green-before-a-tornado-2/. Accessed 6 July 2022.