Soursop, Guyabano, and the Graviola Tree — the Ultimate "Cure" for Cancer?

Though chemicals within the fruit have shown potential anticancer properties in the lab, no evidence supports its use as a "cure" for cancer. 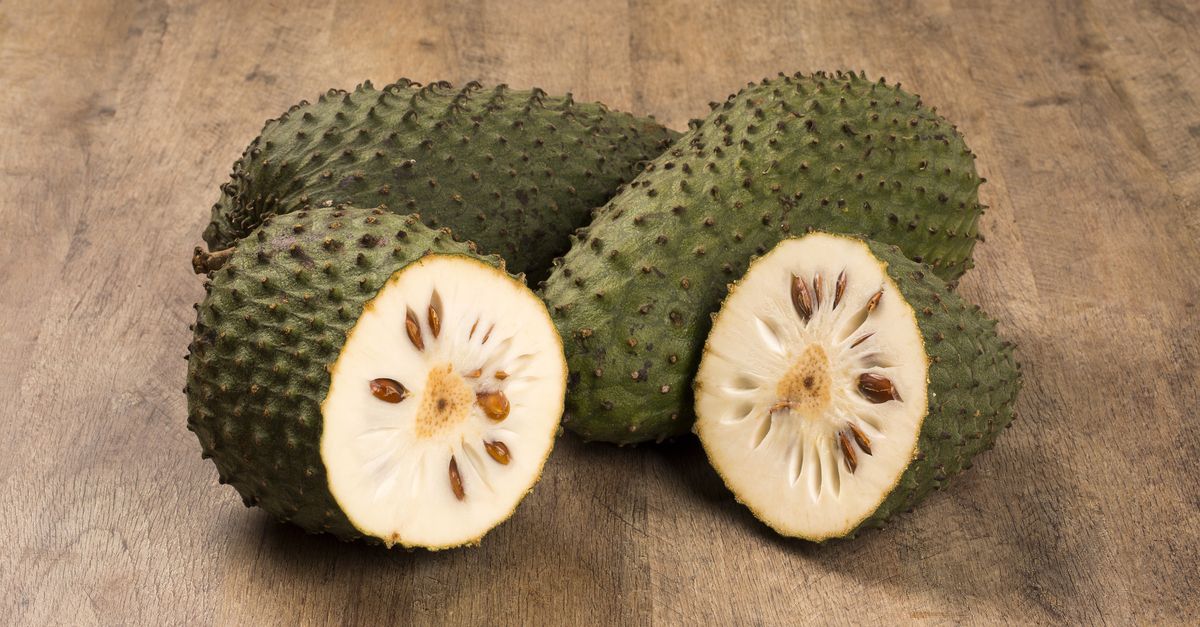 Claim:
The fruit of the graviola tree (soursop or guyabano), or other components of the plant (A. muricata), are a viable cure for cancer.
Rating:

The fruit (soursop, guyabano), leaves, and bark of the graviola tree (A. muricata), have long been utilized as a folk remedy in parts of Africa and South America for myriad conditions. Claims of their potential to “cure” cancer, similarly, have long been a fixture in certain regions of the Internet — fringe health websites and supplement hucksters, primarily.

In their most exaggerated form, such claims take the form of a widespread conspiracy alleging a pharmaceutical coverup to squash evidence of viable, powerful, and universal cure for cancer in favor of financial gain. The dubious Health Sciences Institute, (promoter of a previously debunked claim that Hillary Clinton has worked to hide a cancer cure dubbed “sour honey”) described the plant's potential this way:

Since the 1970s, the bark, leaves, roots, fruit, and fruit seeds of the Amazonian Graviola tree have been studied in numerous laboratory tests and have shown remarkable results with this deadly disease. Several years ago, a major pharmaceutical company began extensive independent research on it. They learned that certain extracts of the tree actually seek out, attack, and destroy cancer cells. [...]

After more than seven years of work behind closed doors, researchers at this company realized they couldn’t duplicate the tree’s natural properties with a patentable substance. So they shut down the entire project. It basically came down to this—if they couldn’t make huge profits, they would keep the news of this possible cure a well-guarded secret. But one researcher couldn’t bear that, and decided to risk his job with the hope of saving lives.

Indeed, there has been research on many parts of, and chemicals within, the graviola tree with regard to their ability to kill cancerous cells. In terms of a possible mechanism, most ideas revolve around unique chemicals contained within the fruit — annonaceous acetogenins — that may present a novel pathway to kill cancer cells. These chemicals are found only in the family of plants Graviola belongs to (Annonaceae) and some research indicates they may have the ability to inhibit chemicals that aid cellular respiration, which can cause a "programmed death" of cancer cells.

Perhaps most notably, this mechanism has been explored using extracts from graviola material against human lung, colorectal, and liver cancer cell lines. Such studies have found that extracts were indeed able to cause programmed cell death as hypothesized. Other studies have shown limited potential in reducing the proliferation of cancer cells in some animals and cell lines as well. It is worth mentioning, however, that many chemicals that show anti-cancer properties in laboratory settings do not translate to viable cures or treatments for cancer.

Investigations on laboratory animals, too, have shown limited but somewhat positive results with regard to the plant’s anticancer potential. Studies on rats and mice, respectively, have shown some anti-tumor potential with prostate cancer and breast cancer, and studies on rats have, as well, shown potential preventive effects for colon cancer.

Outside of singular case reports from people alleging benefits from the plant, no large scale clinical human studies have been published on its efficacy as a legitimate treatment for cancer (at least one clinical trial has been registered, however). As such, the view of the UK based Cancer Research, and other Cancer groups, is as follows:

There have not been any studies [of Graviola] in humans. So we don't know whether it can work as a cancer treatment or not. Many sites on the internet advertise and promote graviola capsules as a cancer cure but none of them are supported by any reputable scientific cancer organisations.

Both the United States Food and Drug administration as well as the United States Federal Trade Commission have issued warnings to groups selling graviola extract with claims of its cancer-curing potential. In 2008, in a press release describing a "sweep" of graviola supplement sellers, the FTC described their products as "bogus".

Outside of overblown claims, there are also legitimate concerns about the safety of these products. Numerous studies have suggested that the potentially active chemicals within the graviola tree may be neurotoxic. Epidemiological studies of cultures that regularly use the plant in traditional medicine have shown associations between the plant’s consumption and Parkinson's disease:

Chemical investigations of active components within the plant reveal strong evidence of its neurotoxicity, as well:

The fruit pulp extract of A. muricata revealed the strongest neurotoxic effect, with 67% cell death at a concentration of 1 µg/mL. A high reduction in cell viability coupled with pronounced cell death was found at 0.1 µg/mL for an Annonaceous seed extract. These results demonstrate that the intake of dietary supplements containing plant material from Annonaceae may be hazardous to health in terms of neurotoxicity.

While it is factual that laboratory and animal studies suggest the potential for some chemicals found within the graviola plant to have anticancer or antitumor effects, no studies have demonstrated its efficacy as a treatment, let alone cure, for cancer. Studies have, however, shown that there is a credible risk that the plant’s active components are neurotoxic as well as toxic to cancer cells. Because of this, we rank the claim that this plant is the "cure" for cancer as false.