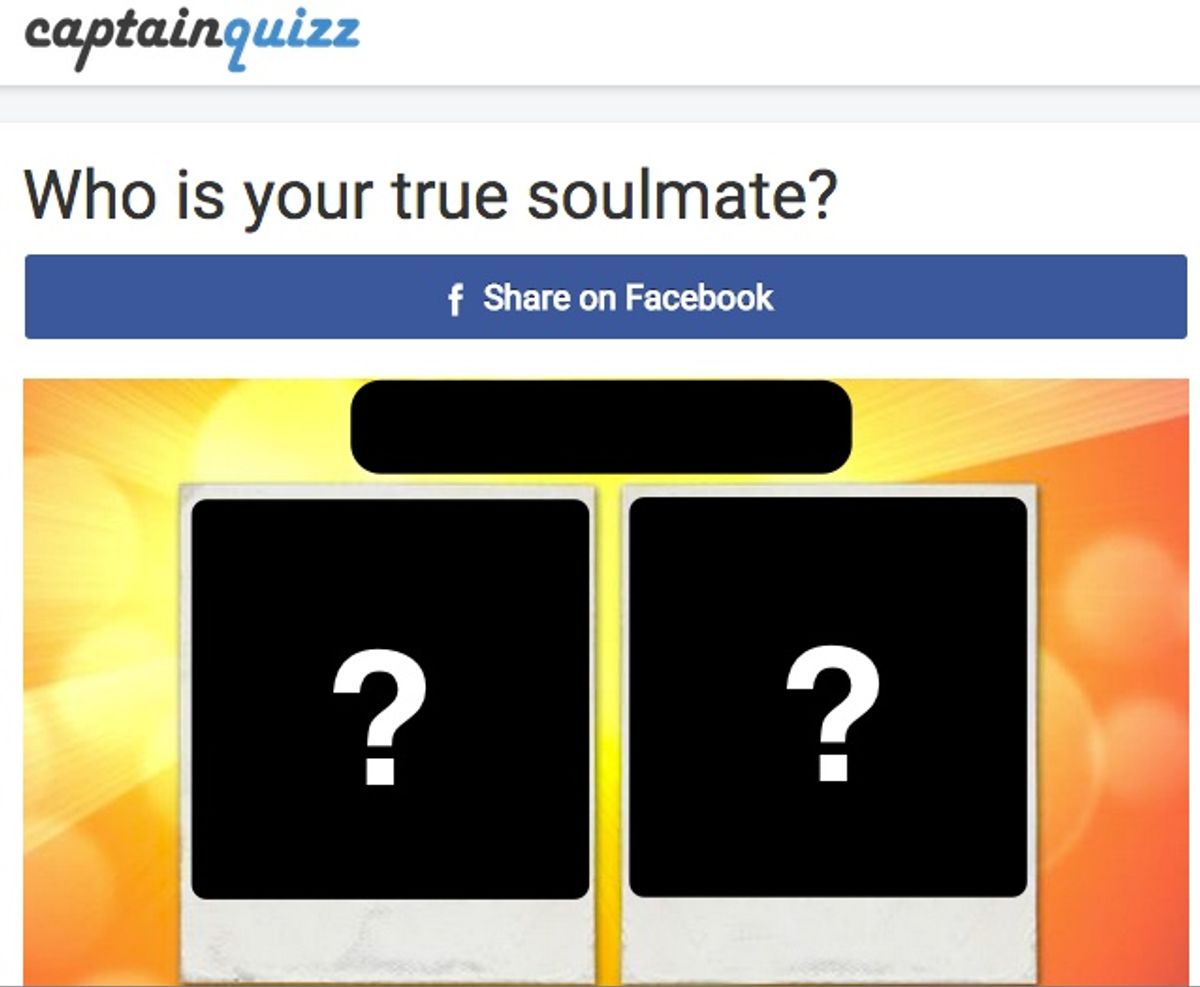 A circulating warning cautions Facebook users that a popular "soulmate quiz" is a security risk.

BEWARE, BEWARE! THERE IS A POST BEING PUT ON PEOPLES FACE BOOK ABOUT WHO IS YOUR SOULMATE FROM A QUIZ COMPANY. IT SEND IT TO YOUR FRIENDS MAKING THEM THINK YOU SENT IT TO THEM. WHEN THEY OPEN IT UP, IT TELLS THEM TO CALL A CERTAIN NUMBER TO CLEAR THE SCREEN. THIS IS A VIRUS.. PLEASE, PLEASE IF YOU SEE THIS ON YOUR FACEBOOK, DELETE IT IF YOU CAN, BUT DO NOT OPEN IT AND TELL YOUR FRIENDS THAT YOU HAVE NOT SENT SUCH A QUIZ TO THEM. TO PLEASE NOT OPEN IT.

In June 2015, a "soulmate quiz" (created by the social quiz page Captain Quizz) became popular on Facebook. Chances are if you didn't try the quiz yourself, several of your friends took it and shared their results in your Facebook feed.

As is often the case, the soulmate quiz's sudden and pervasive popularity almost immediately spawned warnings that there was something sinister behind it.

But the warning was vague and unsubstantiated. It didn't specify which soulmate quiz it referred to (any number of online quizzes fit that description), and didn't state what the "virus" supposedly attached to the quiz supposedly does. Why does the user need to "call a certain number" to "clear the screen"? (Is this a ransomware scheme, a telemarketing scam, or a method for distributing malware?) How is a Facebook user supposed to "delete" something from their News Feed that was posted by someone else? And why, out of the plethora of similar quizzes offered by the Captain Quizz site, is this the single instance users should be wary of?

Captain Quizz is a reputable company that frequently publishes entertainments on Facebook. This particular quiz has also been covered in numerous media features with no reports of malicious activity. While the soulmate quiz (like most other quiz apps) requires access to your Facebook friends list and other profile information to "match" you with a "soulmate," we found no verified reports of actual malware linked to the app.

On 6 June 2015, Mashable writer Brian Koerber took the soulmate quiz and reported no evidence of a virus. Of course, Koerber also reported that it probably was not possible to find your soulmate through a Facebook quiz:

According to a new app from Captain Quizz that has been making its way through your Facebook feed, my true soul mate isn't my girlfriend. It's my mom.

My mother joined Facebook about six months ago, which means she has probably Liked or commented (or both) on every single photo and status update I've had since then. So, if anything, my mom is my biggest Facebook fan.