Did Socrates Say Slander Is 'The Tool of the Losers”?

Some quotes are documented in history and textbooks, while others appear nowhere but the internet. 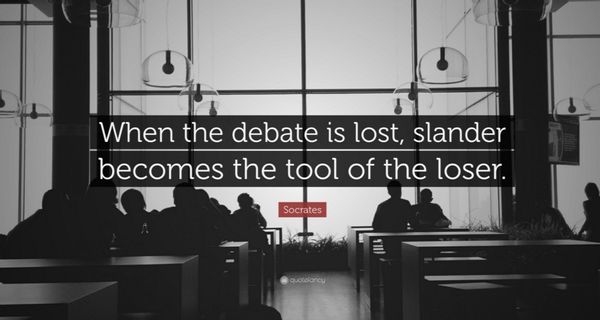 Claim:
Socrates said 'When the debate is lost, slander becomes the tool of the losers.'
Rating:

On 25 June 2019, Eric Trump, the son of President Donald Trump, was reportedly spat upon at a Chicago restaurant. The following day, he took to social media to post an ostensible quote from the Greek philosopher Socrates that proclaimed slander to be the “tool of the losers” in debates:

The classical Greek philosopher Socrates is a fixture of literature and culture, but his legacy is complicated by the fact that what we know of him hasn't come to us directly from him, but from a variety of secondary and indirect sources.

However much truth that statement may or may not hold, the historical attribution of it to Socrates has no solid basis in factual evidence. As the Stanford Encyclopedia of Philosophy notes, the renowned Greek philosopher was "an enigma" and "an inscrutable individual" who wrote nothing, and "all our information about him is second-hand [with] most of it vigorously disputed":

Certainly [Socrates] was impressive, so impressive that many others were moved to write about him, all of whom found him strange by the conventions of fifth-century Athens: in his appearance, personality, and behavior, as well as in his views and methods.

So thorny is the difficulty of distinguishing the historical Socrates from the Socrateses of the authors of the texts in which he appears and, moreover, from the Socrateses of scores of later interpreters, that the whole contested issue is generally referred to as the Socratic problem. Each age, each intellectual turn, produces a Socrates of its own.

The Cambridge Companion to Socrates similarly informs us that:

Socrates, as we know, wrote nothing. His life and ideas are known to us through direct accounts – writings either by contemporaries (Aristophanes) or disciples (Plato and Xenophon) -- and through indirect accounts, the most important of which is the one written by Aristotle, who was born fifteen years after Socrates’ death (399). Because these accounts vary greatly from one another, the question arises as to whether it is possible to reconstruct the life and -- more importantly -- the ideas of the historical Socrates on the basis of one, several, or all of these accounts.

A few secondary sources offer Socrates' commenting on the subject of slander in their paraphrasing of Plato's Apology of Socrates (which recorded Socrates' defense of himself at his trial for impiety and corruption), but not in a way that bears any close resemblance to the quote in question. For example, Professor Josiah Ober, an American historian of ancient Greece, characterized Socrates as proclaiming that "If there are nasty rumors about me floating around, these are the product of my opponent's slanders."

It appears that the widespread attribution to Socrates of the 'When the debate is lost, slander becomes the tool of the losers' bit of wisdom only began after 2008, with the rise of quote-sharing via social media memes:

'When the debate is lost, slander becomes the tool of the loser.' -Socrates. Online searches for the existence of this quote prior to 2010 either produced very sparse results or pointed to posts and pages that had been updated since that year. The absolute earliest Socratic attribution of this phrase we were able to locate came from the social literature site GoodReads, where it appeared in 2008.

So as far as we can tell, the phrase "when the debate is lost, slander becomes the tool of the loser" emerged roughly around 2008 and appears to have no traceable history prior to that. Despite its popularity on social media, no one has ever found a single direct link to any material attributed to Socrates matching the quote. Its abrupt appearance and lack of historical support suggests that Socrates' signature was tacked to the commentary to give it an air of ancient wisdom.