In which we check into some "fun facts" about Social Security from a Facebook meme saying the government should stop "messing" with retirement benefits. 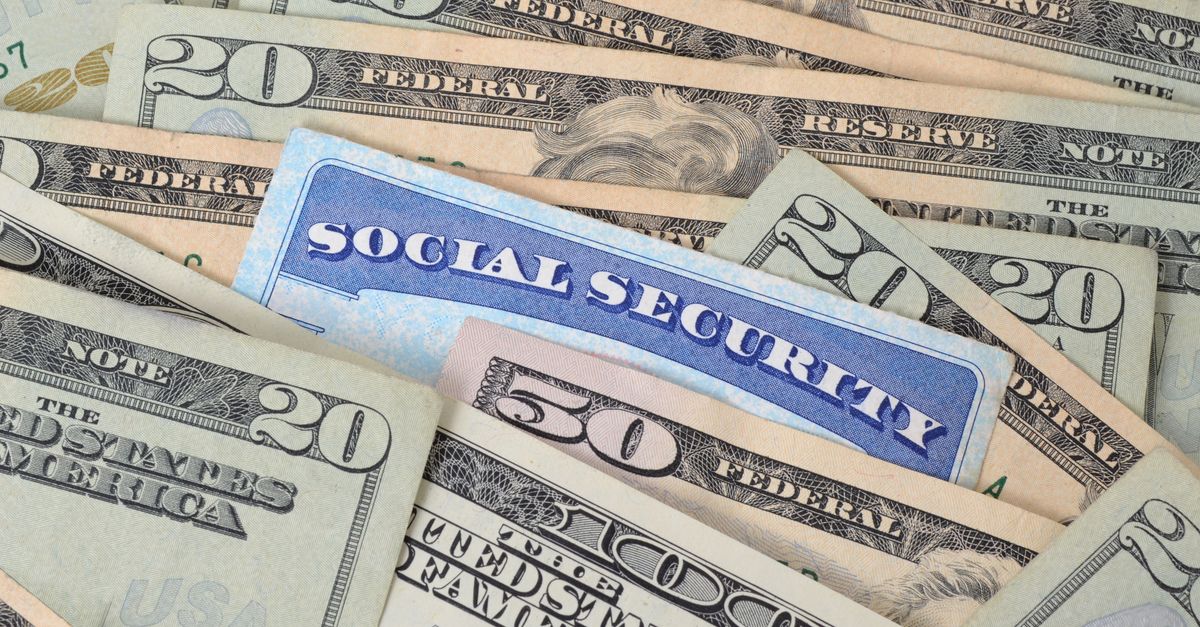 Claim:
A short list of "fun facts" distributed on the Internet accurately describes the workings of the U.S. Social Security system.
Rating:

A Facebook meme making the rounds in 2017 lists several purported "fun facts" about Social Security aimed at countering arguments that the United States' government-run retirement program needs to be scaled back in order to balance the federal budget:

* Social Security and Medicare are paid for with a separate tax. They add NOTHING to the national debt.

* Social Security has a $2.5 trillion SURPLUS.

* Congress has "borrowed" trillions from Social Security to pay for government spending.

So when the GOP says we need to cut Social Security in order to balance the federal budget... they're lying.

Were it only so clear and simple. Unfortunately, many aspects of the Social Security system are misunderstood by the public and misrepresented by politicians, so it behooves us to put simplistic statements like these to the test.

First, a little history: The concept of Social Security grew out of the perceived necessity to address economic changes brought about by the industrial revolution and the increasing urbanization of American life in the early 20th century, writes former Social Security Administration (SSA) historian Larry DeWitt:

Earlier forms of economic security reflected the nature of preindustrial societies. In preindustrial America, most people lived on the land (and could thus provide their own subsistence, if little else); they were self-employed as farmers, laborers, or craftsmen, and they lived in extended families that provided the main form of economic security for family members who could not work. For example, in 1880, America was still 72 percent rural and only 28 percent urban. In only 50 years, that portrait changed; in 1930, we were 56 percent urban and only 44 percent rural (Bureau of the Census 1961).

The problem of economic security in old age was not as pressing in preindustrial America because life expectancy was short. A typical American male born in 1850 had a life expectancy at birth of only 38 years (a female, only 2 years longer). But with the dawning of the twentieth century, a revolution in public sanitation, health care, and general living standards produced a growing population of Americans living into old age.

Company pensions came into existence in the late 1800s, but for most Americans working in the new industrial economy they were not an option:

The biggest problem with company-provided pensions was that the percentage of workers anticipating an employment-related pension from their company or their union was tiny. Indeed, in 1900 there were a total of five companies in the United States (including Dolge) offering their industrial workers company-sponsored pensions. As late as 1932, only about 15% of the labor force had any kind of potential employment-related pension. And because the pensions were often granted or withheld at the option of the employer, most of these workers would never see a retirement pension. Indeed, only about 5% of the elderly were in fact receiving retirement pensions in 1932.

The times were ripe for "new forms of social provision," writes DeWitt. National social insurance was an idea Europeans were already experimenting with by the 1880s, though it took the United States another fifty years to jump on the bandwagon, first in the form of some experimental state initiatives enacted between 1930 and 1935, then finally on the federal level with the passage of the Social Security Act of 1935.

Per the wishes of its greatest champion, Franklin D. Roosevelt, Social Security was conceived from the outset as a self-financing program:

On the financing issue, President Roosevelt insisted that the program be self-supporting, in the sense that all of its financing must come from its dedicated payroll taxes and not from general government revenues. He viewed the idea of using general revenues as tantamount to a "blank check" that would allow lawmakers to engage in unbridled spending, and he feared it would inevitably lead to unfunded future deficits. By tying expenditures to a dedicated revenue source, the program could never spend more than it could accrue through payroll taxation.

However, there are a couple of well-known problems with the start-up of all pension schemes. Typically, pension system costs are lowest in the early days when few participants have retired and much higher later on when more people qualify for benefits. Funding a pension system on a current-cost basis thus would impose significantly higher taxes on future cohorts of beneficiaries. To offset this tendency, the CES planners proposed using a large reserve fund that could be used to generate investment income thereby meeting a portion of future program costs.

Thus were born the Social Security trust funds, into which all program revenues go and out of which, by law, only benefits and administrative costs can be taken, with one important exception: any surpluses are to be invested in U.S. Treasury bonds, thereby accumulating interest revenue for the program and making the surpluses available for general use by the government.

After 80-plus years, the system remains largely self-sustaining, though that cannot continue to be the case unless some major adjustments are made. What began as a contributory retirement insurance program offering minimal old-age assistance to barely half of the existing workforce has grown into a massive provider of retirement and disability benefits to more than 90 percent of American workers and their dependents. An estimated 65.1 million people received payments from the Social Security Administration in 2015. A total of $897.1 billion was distributed, an amount equivalent to 5 percent of the Gross Domestic Product (for comparison, U.S. military spending was about $598 billion in 2015).

The 2016 Trustees Report projects that the number of retired workers will grow rapidly, as
members of the post-World War II baby boom continue to retire in increasing numbers. The number of retired workers is projected to double in about 50 years. People are also living longer, and the birth rate is low. As a result, the Trustees project that the ratio of 2.8 workers paying Social Security taxes to each person collecting benefits in 2015 will fall to 2.1 to 1 in 2037.

... Social Security is not sustainable over the long term at current benefit and tax rates. In 2010, the program paid more in benefits and expenses than it collected in taxes and other noninterest income, and the 2016 Trustees Report projects this pattern to continue for the next 75 years. The Trustees estimate that the combined OASI and DI trust fund reserves will be depleted by 2034.

Members of both the Republican and Democratic parties have called for reform of the Social Security system to rescue it before the reserves run out. In December 2016, House Ways and Means Social Security Subcommittee Chairman Sam Johnson (R-Texas) introduced a bill to "modernize" and "permanently save" Social Security via measures such as changing how benefits are calculated, updating the definition of "full retirement age," and cutting back on payouts to dependents of higher-income workers.

Other politicians (mainly Republicans) say Social Security cutbacks are necessary to "balance the federal budget" — a claim the "fun facts" meme we introduced at the beginning of our article is supposed to disprove, beginning with the first item:

CLAIM: Social Security and Medicare are paid for with a separate tax. They add nothing to the national debt.

Mostly true. Social Security is and always has been a self-financing system, using payroll tax revenues, income tax on benefits, and interest on Treasury bonds to balance its budget. In terms of overall federal spending, it's an "off-budget" item, which is to say, separate from the general budget, which is made up of discretionary items like military expenditures.

Historically, Social Security hasn't always been off-budget, a fact that continues to be a source of confusion. Between 1969 and 1990, changes in the law permitted trust fund surpluses to be counted as assets when computing the federal deficit (which had the desired effect of making the deficit appear smaller than it actually was). This has not been the case since the passage of the Budget Enforcement Act of 1990, historian Larry DeWitt writes, but politicians still use the informal convention of including trust fund surpluses in discussions about the budget when it suits their purposes:

The fact that Social Security is off-budget and self-sustaining doesn't mean there is no interaction at all between it and the general account. Every time the trust funds purchase or redeem Treasury bonds, the two intermingle — a point that isn't lost on those clamoring for reform.

When Social Security runs a fiscal deficit (that is, it takes in less tax money than it pays out in benefits), the shortfall has to be covered with Treasury funds, which critics say contributes to the national debt. According to the Heritage Foundation's Romina Boccia, this has been the case every year for the better part of a decade:

But that formulation doesn't jibe with the trustees' own recent reports, according to which the program's cash flow was still in the black in 2017 (thanks to interest income) and wasn't projected to creep into the red until 2018 (for the first time since 1982).

Even facing a negative cash flow, the trustees project that the system can sustain itself for another 15 years by gradually redeeming the securities held in its trust funds. But, critics ask, doesn't the redemption of Treasury bonds impact the Treasury's own cash flow and deepen the national debt?

Yes, as to affecting the Treasury's cash flow (but only temporarily), and no, as to deepening the national debt. Social Security Administration economist David Pattison explains:

True, and then some. As of 2017, Social Security Trust Fund reserves stood at $2.82 trillion, up $19 billion from the previous year. In the absence of reforms, the trustees expect to maintain surpluses, albeit gradually declining, through 2034.

CLAIM: Congress has "borrowed" trillions from Social Security to pay for government spending.

True, but misleadingly stated. As we explained above, the system was set up from day one such that trust fund surpluses must be invested in interest-earning U.S. Treasury bonds, in effect lending the monies to the general account for whatever discretionary uses Congress sees fit to spend them on. One might argue that there are more practical alternatives, but it's misleading to characterize it as an abuse of the system.

Are members of the GOP "lying," as the Facebook meme holds, when they say Social Security needs to be cut in order to balance the federal budget? Not necessarily, but they're painting a distorted picture, purposely or not. In the short term, and minus the implementation of other reforms, cutting Social Security benefits would only add to the trust funds' surpluses while cheating beneficiaries of the assistance they've been promised. It wouldn't add to the federal budget's bottom line.

Without question, changes of some kind will be necessary to keep Social Security viable decades hence, so there's no way around the government "messing" with the system to that end, one way or another.