The Snow White figurine arrived at roughly the same height as the dwarves, so Disney found "an ingenious and elegant solution." 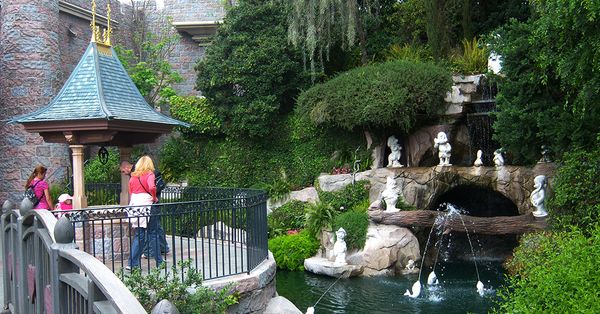 Disneyland's Snow White Grotto is perhaps one of the most peaceful places in an otherwise chaotic, yet magical, theme park. The calm, flowing water is a welcome departure from the barrage of strollers and massive crowds, especially on a hot day in Anaheim, California. Snow White Grotto can be found near the front of the east side of Sleeping Beauty Castle. It's usually not packed with too many people.

The grotto includes Snow White, all seven dwarfs, and a few animals. It was dedicated by Walt Disney on April 9, 1961. Unfortunately, the statues all arrived at roughly the same height. This meant that Snow White was about as tall as the dwarves.

D23.com, the Official Disney Fan Club, posted that "the reason all eight marble figures were the same height was traced back to a set of eight "Snow White and the Seven Dwarfs" gift soaps, all molded the same size to fit inside the package."

John solved the problem using "forced perspective," the same technique that makes Disneyland buildings seem taller by building each successive level at a smaller scale. By putting Snow White high atop the grotto, she seems to be the proper size.

John also had figures made of various birds, deer, and bunnies to heighten the effect. The "tradition" of a same-height Snow White was duplicated for the grotto at Tokyo Disneyland.

It's true that forced perspective was used to make the Snow White figurine appear taller than the dwarf statues. The marble figurines were eventually replaced with fiberglass replicas. One point of disagreement between some Disney fanatics involved how the figurines arrived in the first place. We even found two official Disney websites that posted differing explanations.

On the official Disney Parks blog, it said: "The white, marble figurines depicting Snow White and the Seven Dwarfs arrived anonymously from Italy as a gift for Walt Disney."

However, D23.com, also an official Disney website, published the name of the sculptor:

The grotto was the result of a collection of sculpts that was ordered from Italy. Walt was fond of them and asked Disney Legend John Hench to find a Disneyland home for them.

Commenters on the Disney Parks blog story pointed out that they had learned the truth from Walt Disney Imagineers. For example, a commenter named Bradley posted:

According to imagineer Valerie Edwards, who talked about the sculptures during the Adventures by Disney Backstage Magic tour I had taken, the story that they were donated anonymously is false and that they were in fact commissioned by Disney from a specific Italian sculptor whose name I don’t recall, but she did mention it.

She did concur that the size mix-up was an honest mistake, blaming misunderstandings when it came to converting between measuring systems.

Michele Himmelberg, who was the Public Relations Director at Disneyland Resort, and the author of the Disney Parks Blog story, responded: "Hi Bradley, we’ll have more about this story from a Disney expert in the coming weeks. Stay tuned and thanks for reading!"

We were unable to find a later story on the blog about the grotto.

Snow White Grotto may be lacking in thrills when compared to other Disneyland attractions, although it does light up when the sun goes down. However, whatever it lacks in fun, it more than makes up for it by the generous purpose of the wishing well. The Disney Parks blog described what happens after parkgoers toss coins and make wishes:

Throughout the years, guests have tossed pennies and small coins into the well, along with their wishes. They may not realize that making their own wish also grants a wish. For decades, the money collected in the Wishing Well has been donated to children’s charities. Inscribed on the well is the sentiment: "Your wishes will help children everywhere."