Are Kids 'Snorting' Smarties and Putting Themselves at Risk of Nasal Maggots?

Citing a doctor, a 2009 warning to parents from a Rhode Island middle school claimed maggots could "feed on the sugary dust wedged inside the nose." 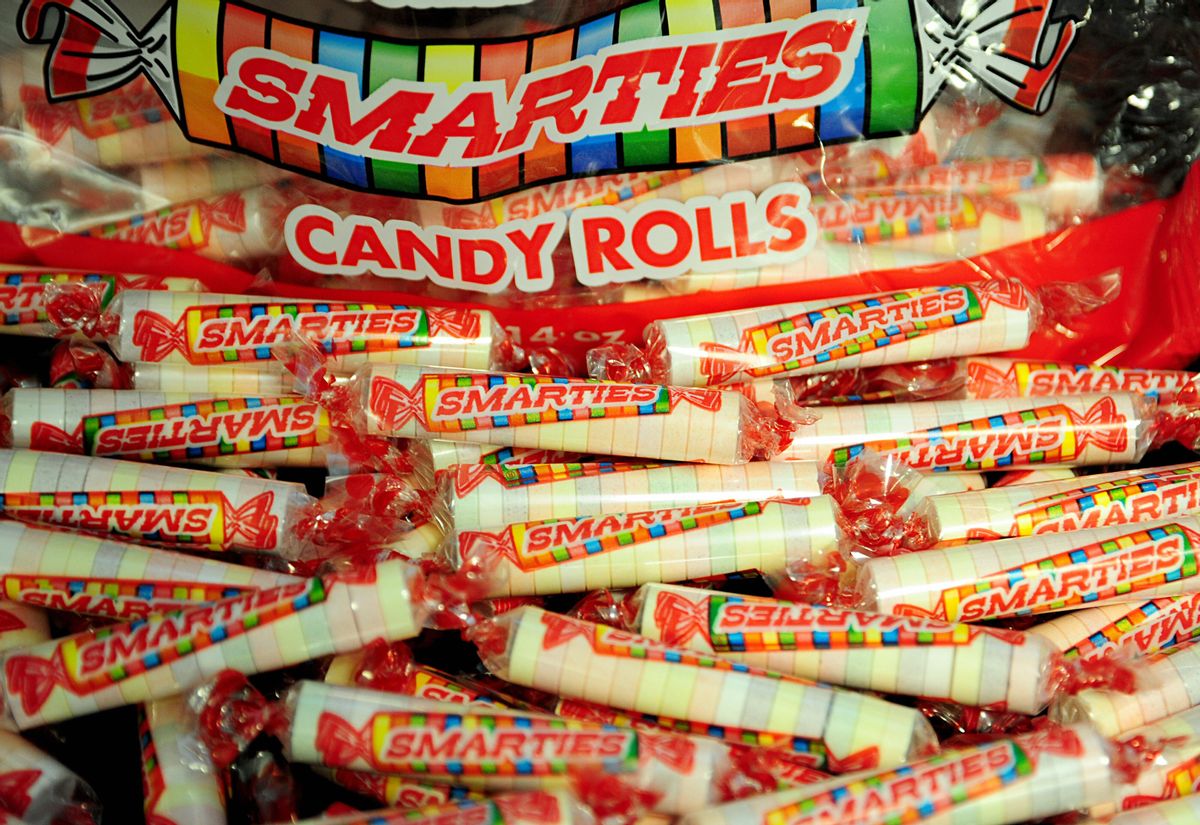 Claim:
Schoolkids are “snorting” and “smoking” Smarties and putting themselves at risk of contracting nasal maggots.
Rating:

There are a number of YouTube videos of people chopping up and snorting Smarties (candy). Articles state that kids can get "nasal maggots" from doing this. Regardless of how idiotic this practice may be, "nasal maggots" smells like a parental scare story to me, and I, for one, am highly skeptical of this; as far as I know, flies lay maggots in rotten flesh, not "rotting candy in nasal passages."

Smarties are, in the U.S. at least, a brightly-colored, fruit-flavored, pill-sized form of candy produced by the Smarties Candy Company and sold in cellophane-wrapped rolls. (In Canada, Smarties are known as Rockets, and in the UK, Smarties refers to another type of candy entirely, colorful chocolate-coated spheroids similar to M&Ms.)

In recent years, news accounts have popped up at various times, reporting (always as a supposedly new trend) “fads” and “epidemics” of schoolkids crushing up Smarties and either “snorting” the resulting powder (i.e., inhaling it into their nasal passages) or “smoking it” (i.e., putting it in their mouths and attempting to blow it out of their noses), with the Wall Street Journal writing back in March 2009 that:

Summit Middle School in Frisco, Colo., is a tobacco-free campus. Students who smoke cigarettes are suspended.

But when a lunchtime crew of sixth-graders last fall started “smoking” Smarties, the tart, chalky candy discs wrapped in cellophane, lunchroom monitors and the school nurse were flummoxed.

The children didn’t light the candy. They crushed it into a fine powder in its wrapper, tore off one end, poured the powder into their mouths and blew out fine Smarties dust, mimicking a smoker’s exhale.

“It was freaky,” says Corinne McGrew, a nurse for Summit School District. “My biggest concern was that they would aspirate the wrapper or a whole Smarties and it would be a choking hazard.”

The fad at Summit Middle School died down after a few days and some harsh words from the lunchroom staff. But at other schools and across the Internet, “smoking Smarties,” as the activity has been labeled, is gaining popularity. Some children have even taken to snorting it, all to the horror of parents, teachers and the 60-year-old company that manufactures the candy.

“Snorting” Smarties is something many youngsters across the years have engaged in once or twice as a lark or a dare. But, as with so many other similar “look at this terrible thing kids these days are doing” warnings propagated by adults, the instances of kids talking about snorting Smarties, school administrators issuing dire warnings about it, and inventive youngsters posting videos about how to do it all appear to vastly outstrip the real-world incidence of the phenomenon.

The latest recurrence of interest in the purported Smarties-snorting craze was prompted by a January 2014 notice issued to parents about this “unsafe, new trend among students” and the risks thereof by Portsmouth Middle School in Rhode Island:

Important Health Information for Parents Regarding the Candy, Smarties

Recently, we have experienced an unsafe, new trend among our middle school students — smoking or snorting the candy, Smarties. Our research has taught us this phenomenon is happening across the country and is the subject of many You-Tube videos. To smoke Smarties, students crush the candies into a fine powder while it is still in its wrapper, tear off an end, pour the powder into their mouths and blow out the smoke. Some are able to put the powder into their mouths and blow it out their noses. Thus, they imitate a smoker’s exhale. To snort Smarties, students use a straw or a rolled up piece of paper to snort the fine, crushed candy powder up into their nasal cavities. Students are also using the candy Pixie Stix in the same manner.

The “benefit” for students engaging in this practice is unknown. However, the risks, associated with inhaling Smarties smoke or snorting Smarties, are many and include:

- Cuts — if the Smarties have not been finely crushed, pieces may act like razor blades cutting the tissue with which they come in contact.

- Infection — sugar residue may remain in the nasal cavity, sinuses and/or lungs. This residue may lead to infections, cough, wheezing, and possible respiratory arrest.

- Irritation of the lungs — smoking or snorting Smarties can lead to a smoker’s cough which can cause laryngospasms causing the voice box to spasm or close.

- Possible Maggots — Dr. Oren Friedman, a Mayo Clinic nose specialist, has cautioned that frequent snorting could even rarely lead to maggots feeding on the sugary dust wedged inside the nose.

This time around, the penultimate item on that list about the perils of snorting Smarties including “nasal scarring, infection, lung irritation, allergic reaction, or possible maggots” really caught the public’s attention (even though it had been included in similar news reports published five years earlier).

Sucking crushed Smarties into your nose puts you at risk of “nasal maggots”? Really?

Smarties are made of dextrose, citric acid, calcium stearate, various “natural and artificial flavors,” and food colorings. There’s nothing inherently toxic about them, although snorting anything into one’s nose brings a risk of blockage, infection, and nasal or pulmonary irritation. Contracting maggots from snorting Smarties, however, appears at this point to be little more than a theoretical possibility rather than a documented hazard. The school warning reproduced above listed it among the “risks associated with inhaling Smarties smoke or snorting Smarties” and referenced Dr. Oren Friedman, a Mayo Clinic nose specialist, on the subject, apparently picking up his having mentioned that risk as a “rare” possibility in an article published back in 2009:

Mark Shikowitz, an ear, nose and throat doctor at Schneider Children’s Hospital in New Hyde Park, N.Y., treated a boy about 9 years old who complained his nose was burning because of a Smarties incident. (His parents brought in a Smarties wrapper but weren’t sure how he’d ingested them.) Dr. Shikowitz determined that part of a Smarties must have lodged in the boy’s nose until it dissolved. The child wasn’t harmed.

Dr. Shikowitz says Smarties may cause irritation to throats and noses — and even lungs if inhaled — but are not likely life-threatening because they eventually will dissolve. 'I still don’t think it’s a great idea,' he says.

Oren Friedman, a Mayo Clinic nose specialist, cautioned that frequent use could lead to infections or even worse, albeit rare, conditions, such as maggots that feed on sugary dust wedged inside the nose.

The hard deadlines website queried Friedman on that issue, and he acknowledged that he had not studied Smarties-snorting in particular or ever witnessed a case of Smarties-induced nose maggots, but stated that he “had seen maggots in the nose from other food products in general”:

'We did not do a study on this in particular … however … we often see patients with foreign materials in their noses which can cause a variety of problems — even years after the insult occurs.

The sugar in Smarties can irritate the nose acutely and over the long term. In addition to the local irritation from the foreign material and powder, over time, the Smarties can lead to various overgrowth of bugs including viruses/fungi/bacteria. The quote regarding the maggots relates to the fact that when a foreign material, and especially a food, resides in the nose for a long period of time, infections may occur, worms may reside in the nose, even maggots may flourish in this environment — and we have encountered such a problem in the past. Hopefully the thought of possible maggots in the nose will help dissuade children from snorting the Smarties.'

When asked in a followup if he had actually ever seen Smarties cause maggots, he replied, 'Just a possibility. I have seen maggots in the nose from other food products in general.'

So yeah, some kids have tried snorting Smarties (and will probably be trying it for as long as Smarties exist), and yes, that practice does have some potential health risks. But snorting Smarties appears to be far more a subject of gossip than actual practice, documented health problems stemming from actual occurrences of it are few and mild, and contracting nasal maggots from it is a remote possibility not yet observed in real life.

This article was updated on Oct. 20, 2022, to meet Snopes' current formatting and editing standards.