Can the Snakehead Fish Survive on Land?

An invasive species of fish is causing problems for wildlife officials in Georgia. 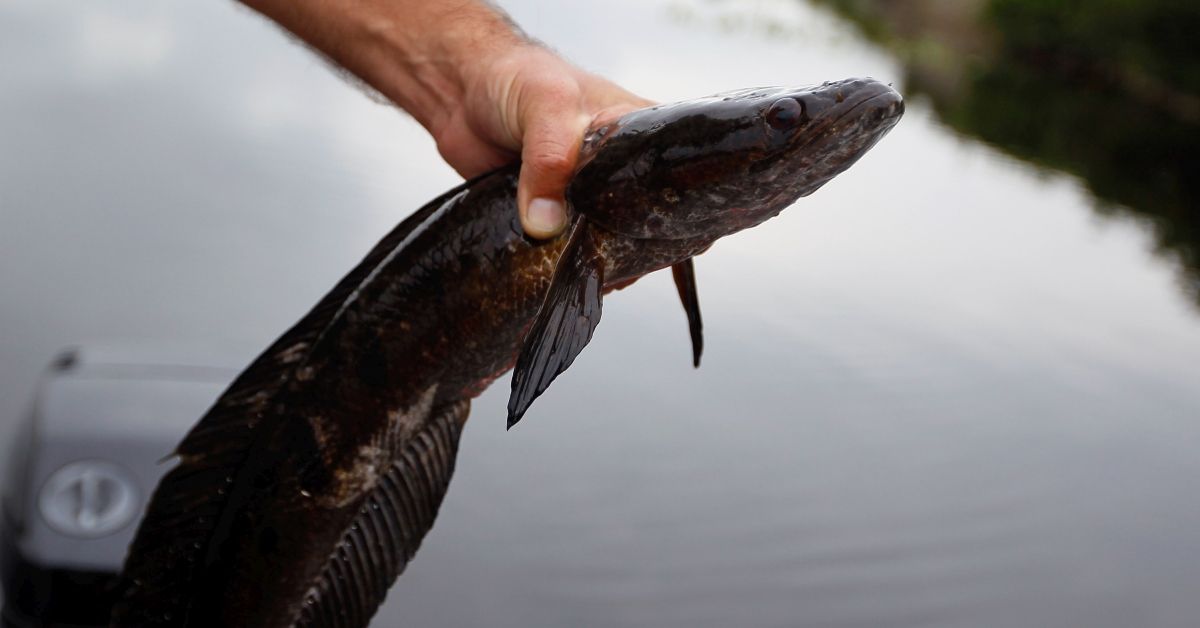 Claim:
The snakehead fish can survive on land.
Rating:

In the right conditions, the snakehead fish can survive on land for a few days.

However, the snakehead fish can not live on land indefinitely.

On Oct. 10, 2019, many readers came across news stories about an invasive species of fish called the snakehead fish that had been discovered in Georgia. While these stories largely dealt with wildlife officials' attempts to eradicate the species, what caught the attention of most readers were brief mentions of this fish's unique ability to survive on land.

A snakehead fish that survives on land was discovered in Georgia. Officials want it dead

An invasive fish species that can breathe air and survive on land has been found in Georgia for the first time. And officials are warning anyone who comes into contact with the species to kill it immediately.

An angler caught the northern snakehead fish this month in a pond in Gwinnett County, the Georgia Department of Natural Resources' Wildlife Resources Division said Tuesday.

"Thanks to the quick report by an angler, our staff was able to investigate and confirm the presence of this species in this water body," said Matt Thomas, chief of fisheries for the Wildlife Resources Division. "We are now taking steps to determine if they have spread from this water body and, hopefully, keep it from spreading to other Georgia waters."

The snakehead fish can truly survive on land. However, some readers may have been left with the impression that this species of fish can live on land for an indefinite period of time.

There are approximately 21 species of snakehead fish. The northern snakehead (Channa argus) is a bimodal breathing fish thanks to a lung-like labyrinth organ near its gills. The snakehead can store atmospheric oxygen in this organ and then draw from this supply as it swims. This allows the snakehead to survive in low oxygen water. This fish can also use its unique bimodal breathing ability to move between bodies of waters.

Unlike most fish, the northern snakehead has little sacs above its gills that function almost like lungs; the fish can surface and suck air into the sacs, then draw oxygen from the stored air as it swims. The air sacs are handy for surviving in waters that are low in oxygen, and even allow the fish to survive out of water for a couple of days, as long as it doesn’t dry out.

A research article published in Biology Open in 2018 elaborated on the air-breathing abilities of the snakehead:

The northern snakehead (Channa argus) is a species of air-breathing fish that is widely distributed in East Asia. This fish has a peculiar accessory breathing organ, the suprabranchial chamber, by which the fish breathes air at the water's surface using a cough-like mechanism (Ishimatsu and Itazawa, 1981; Lefevre et al., 2014), making possible short-term survival out of water (Nagata and Nakata, 1988). The suprabranchial chamber of Channa possesses a richly vascularized wall for gas exchange. It communicates with the buccopharyngeal cavity through a ventral opening guarded by a ‘shutter’ plate bone outgrowth of the first branchial arch, which can close the inhalant aperture of the suprabranchial chamber during expiration (Munshi, 1962).

While a snakehead's ability to breath air may certainly come as a surprise to many, this is not the only species of fish with this ability. Andy Turko, the co-author of a 2015 study into one such species, the mangrove rivulus, spoke to National Geographic about these amphibious fish:

Fish use gills to take in oxygen from the water. But many fish, like the mangrove rivulus, have adaptations that let them breathe air.

For instance, mangrove rivulus “have specialized skin that takes on many of the roles of gills,” such as maintaining salt levels, Turko says. [...]

The walking catfish, a Southeast Asian native that's invaded South Florida, has an extra organ that supports its gills and helps it take in oxygen from the air.

This is not the first time that the snakehead has made national news. In 2002, there was a bit of a panic after snakeheads were found in a pond in Crofton, Maryland. The snakehead fish's ability to survive on land, its scary-sounding name, and the fact that it is considered an invasive species, led to a full-blown media circus about the discovery as the public imagined "monster fish" stalking the woods in search of prey.

The incident even inspired a couple of horror movies, such as "Frankenfish" and "Snakehead Terror":

The snakehead can truly survive out of water for a few days. However, this fish does not have the ability to traverse long distances over land, nor is it an adept ground hunter.

Whit Gibbons, professor emeritus of ecology at the University of Georgia, wrote in 2017:

Young snakeheads eat a variety of zooplankton and small aquatic insects. Adults eat other fish, sometimes one-third the length of their own bodies, as well as crawfish and frogs. Snakeheads are different from most other fish, which cannot survive for long out of water.

Adult northern snakeheads have gills but can also gulp air and have been documented to live out of water for up to four days. However, although a young one may travel overland for several feet, a full-grown adult is too large to move effectively, so your pet chihuahua will probably be safe if it can make it to the pet door.

Here's a video of a snakehead in Thailand as it "walks," crawls, or wiggles its way back to the water:

Duan, Ting, et al.   "How Does the snakehead Channa Argus Survive in Air? The Combined Roles of the Suprabranchial Chamber and Physiological Regulations During Aerial Respiration."     Biology Open.   8 February 2018.