Does Video Show a 'Snake Standing Up,' Raising Its Head?

Social media commenters on Facebook and Reddit hypothesized that the snake in the video was either a king cobra or black mamba. 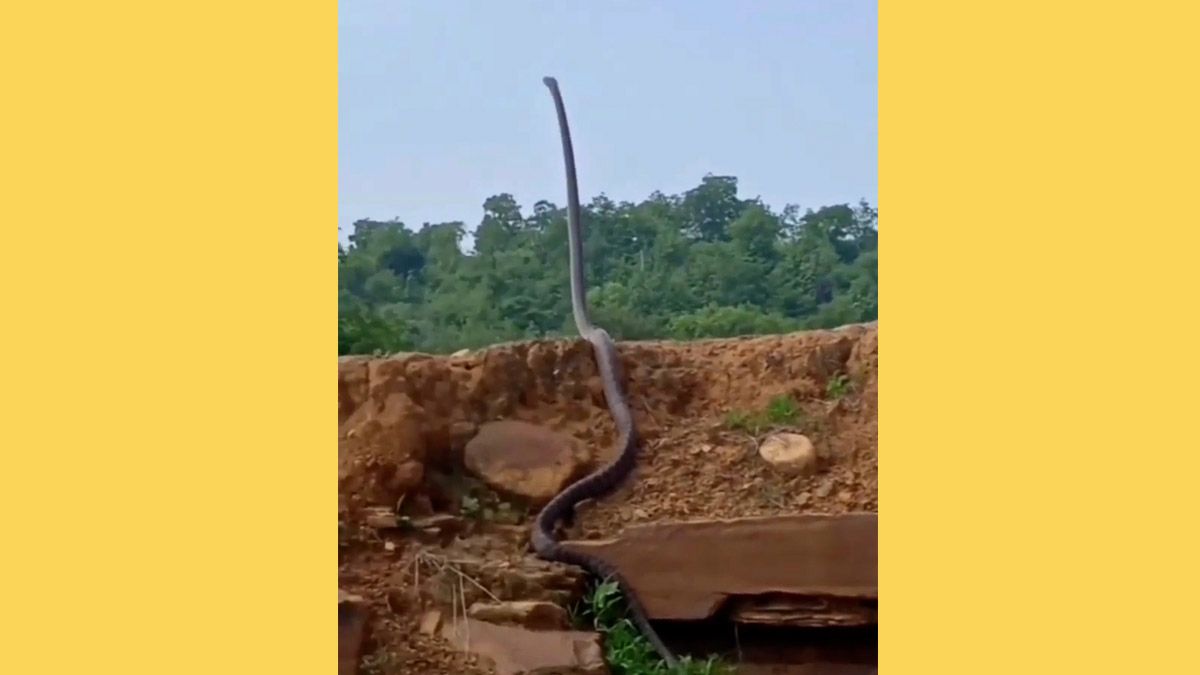 A video supposedly showed a snake standing up and raising its head and was possibly a king cobra or black mamba in Malaysia, India, Zimbabwe, or another country. (Image Via Facebook)

Claim:
A video of a long snake "standing up" and raising its head high into the air is real.
Rating:

We shared the video with John Kleopfer, a state herpetologist with the Virginia Department of Wildlife Resources. By email, he confirmed that the snake shown in the clip was, in fact, a king cobra.

In early August 2022, a video was shared on social media with captions that claimed it showed a "snake standing up" and "raising its head." Readers appeared to want to know not only if the video was real, but also sought more information about whether it showed a king cobra, black mamba, or other kind of snake.

In our initial searches, the oldest version of the "snake standing up" video that we located was from a Facebook page named We are Malaysians. It was posted on Aug. 1 with the caption, "King Cobra":

According to the video's view count, it had been played on the We are Malaysians Facebook page nearly 5 million times in less than two weeks.

A reader shared with us another post that featured a slightly longer version of the same video. This lengthier version of the clip was posted on the Zimbabwe-based Sly Media Productions Facebook page on Aug. 11. This indicated that the We are Malaysians posting of the video likely wasn't the first time it was shared.

Users in several posts on Reddit debated whether the video showed a king cobra or black mamba raising its head. Both of these types of snakes can raise the front portion of their bodies. The Reddit posts were also filled with lots of jokes about the snake in the video. For example, one user joked, "That’s me when I’m looking for my wife at Target because I wanted to look at the electronics really quick."

According to the Smithsonian's National Zoo & Conservation Biology Institute, the venomous king cobra's "average size is 10 to 12 feet (3 to 3.6 meters), but it can reach 18 feet (5.4 meters)." Meanwhile, black mambas are "Africa’s longest venomous snake, reaching up to 14 feet in length, although 8.2 feet is more the average," according to National Geographic.

We reached out to John Kleopfer, a state herpetologist with the Virginia Department of Wildlife Resources. By email, he confirmed that the "snake standing up" was, in fact, a king cobra.

We contacted the We are Malaysians Facebook page to attempt to learn more about who recorded the video of the king cobra. It's unclear if it was shot in Malaysia, India, or another country. This story will be updated if we learn more.