Does Video Show a Snake on an AirAsia Plane?

In February 2022, a video that appeared to show a snake moving its head above airline passengers quickly spread across Reddit, TikTok, and Twitter. 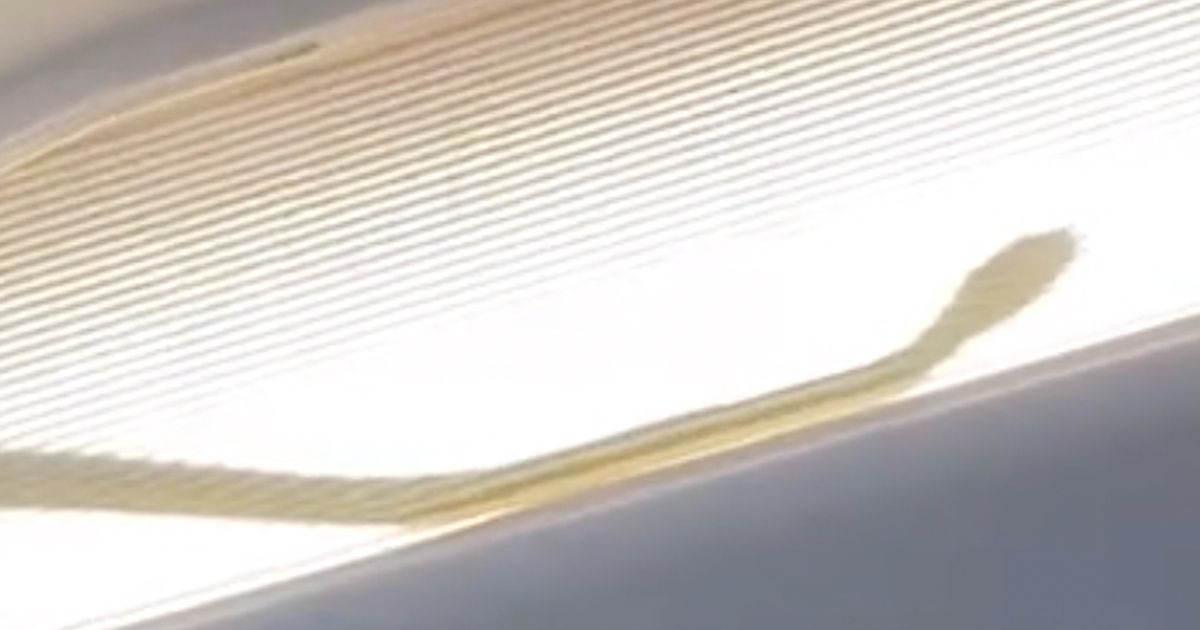 A snake on a plane was spotted and recorded on video on an AirAsia flight over Malaysia. (Image Via TikTok)

Claim:
A video recorded in February 2022 shows a snake slithering in an overhead light above passengers on an AirAsia flight over Malaysia.
Rating:

On Feb. 10, 2022, TikTok user @edal8808 posted a video that appeared to show a snake on an AirAsia plane that was flying over Malaysia. It looked to have been visible inside an overhead light. A flight attendant on AirAsia Flight AK5748 could be heard talking to passengers in the brief clip.

This really did happen. The video led many social media commenters to repeatedly make jokes about the 2006 Samuel L. Jackson film, "Snakes on a Plane."

According to the TikTok video, a Reddit thread, and the above repost on Twitter, the plane with the snake was originally scheduled to fly within Malaysia from Kuala Lumpur (KUL) to Tawau (TWU), but was diverted to Kuching (KCH). It's unclear if @edal8808 was the person who recorded the video.

The Malaysian website Berita Harian posted a picture that showed another angle of the snake inside the plane's overhead light.

Local reports in Malaysia described a confirmation from AirAsia Group head of safety Captain Ling Liong Tien. CNN Türk published the statement that confirmed the news about the snake on the plane:

Following the images shared on social media, AirAsia's chief security officer, Liong Tien Ling, made a statement regarding the incident, saying, “AirAsia is aware of the incident that occurred on the flight from Kuala Lumpur to Tawau on Thursday. As soon as the captain was notified, the plane was diverted to Kuching to be disinfected,” he said. Ling said that the captain took "appropriate action" by prioritizing the safety of passengers and crew, adding, "Guests and crew are never at risk." An AirAsia flight taking off. (Photo by Debajyoti Chakraborty/NurPhoto via Getty Images)

We also received a similar statement from AirAsia:

AirAsia is aware of an incident on a flight from Kuala Lumpur to Tawau on Thursday.

As soon as the Captain was aware, he made the decision to divert the aircraft to Kuching as a precautionary measure to fumigate the aircraft.

This is a very rare incident which can occur on any aircraft from time to time.

The Captain took the appropriate action and the flight have safely departed for Tawau as soon as possible.

The safety and wellbeing of our guests and crew is always our top priority.

At no time was the safety of guests or crew at any risk.

Additionally, Malaysia's New Straits Times published a second confirmation that the incident with the snake on the plane was real, as shown in the video and photograph:

"CAAM flight operations inspectors confirm the aircraft is currently undergoing full fumigation as per the required procedures. CAAM will continue to monitor the situation with the airline's accountable officers to ensure all risks are mitigated accordingly," said Voo.

He added that overall, the diversion was handled very well and all safety procedures were followed closely and in compliance with regulations. "Also, our inspectors are in constant communication with the airline," he said.

In sum, yes, according to reports, a video really did show a snake that was spotted on a plane while it flew over Malaysia. We reached out to AirAsia for additional comment and will update this story if any further information is provided.