Is the Snake and Snorkeler Photo in Online Ads Real?

A picture of a large snake and a snorkeler showed up in an online advertisement that read, "Chilling Unedited Nature Photos Ever Captured." 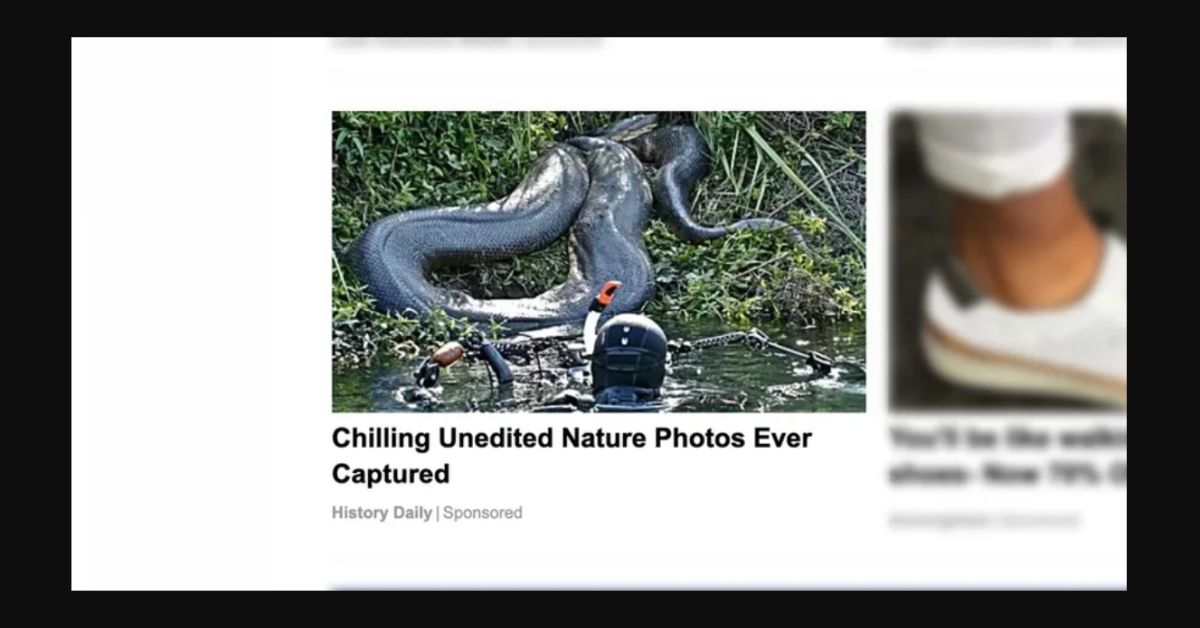 Claim:
A picture shows a snorkeler right next to a very large snake, known as an anaconda.
Rating:

It's true that this photograph of a snorkeler and a very large snake, an anaconda, is real. We found that it was being used in YouTube video thumbnails. It also appeared in online advertisements in May 2022 with the caption, "Chilling Unedited Nature Photos Ever Captured." A variation of the ad read, "Jarring Photos That Will Show You Another Side Of Nature." However, after clicking the ad we were led to a 60-page slideshow article that didn't even mention the picture. This photograph has not been doctored.

Does the picture show a movie being filmed? Is it a fake snake? Who took the photograph of the snake and snorkeler? We did some digging to find out.

After wading through mounds of unhelpful websites and other misleading clickbait, the TinEye.com reverse image search website led us to conclude that the snorkeler is named Franco Banfi. The picture, which was credited to Shaowen Lyn, was posted to Banfi's Facebook page in 2015 and had been captured several years before that. It showed a green anaconda in Brazil:

In the comments, Banfi (the snorkeler) or another person answering as the page reassured users that while the green anaconda was quite big, it wasn't believed to be a danger since it had recently fed. "The green anaconda eats only three to four times per year and it is mostly a shy creature," the page replied. "It does not attack humans on purpose."

We found two other pictures of the green anaconda on Banfi's Facebook page. The first one showed a photograph being taken:

The second one showed a close-up view of a green anaconda's head:

We found additional information in an old article from The Sun that was only available on Archive.org's Wayback Machine. It was dated as Nov. 10, 2012. The same picture from the ad was captioned as follows:

A DIVER risks his life to get close to a 26ft anaconda as it emerges from a river.

Franco Banfi, 53, looking for snakes in Mato Grosso do Sul, Brazil, was pretty sure it was safe as it had just eaten.

He just hoped it didn’t fancy any afters...

We also located additional pictures of the green anaconda on Banfi's website, WildlifePhotoTours.ch. They appear at the very bottom of the gallery page as part of the VIP tour offerings.

In sum, yes, the picture of the snorkeler and the large snake, which turned out to be a green anaconda in Brazil, was genuine. We reached out to Banfi with some questions and will update this story if we receive a response.