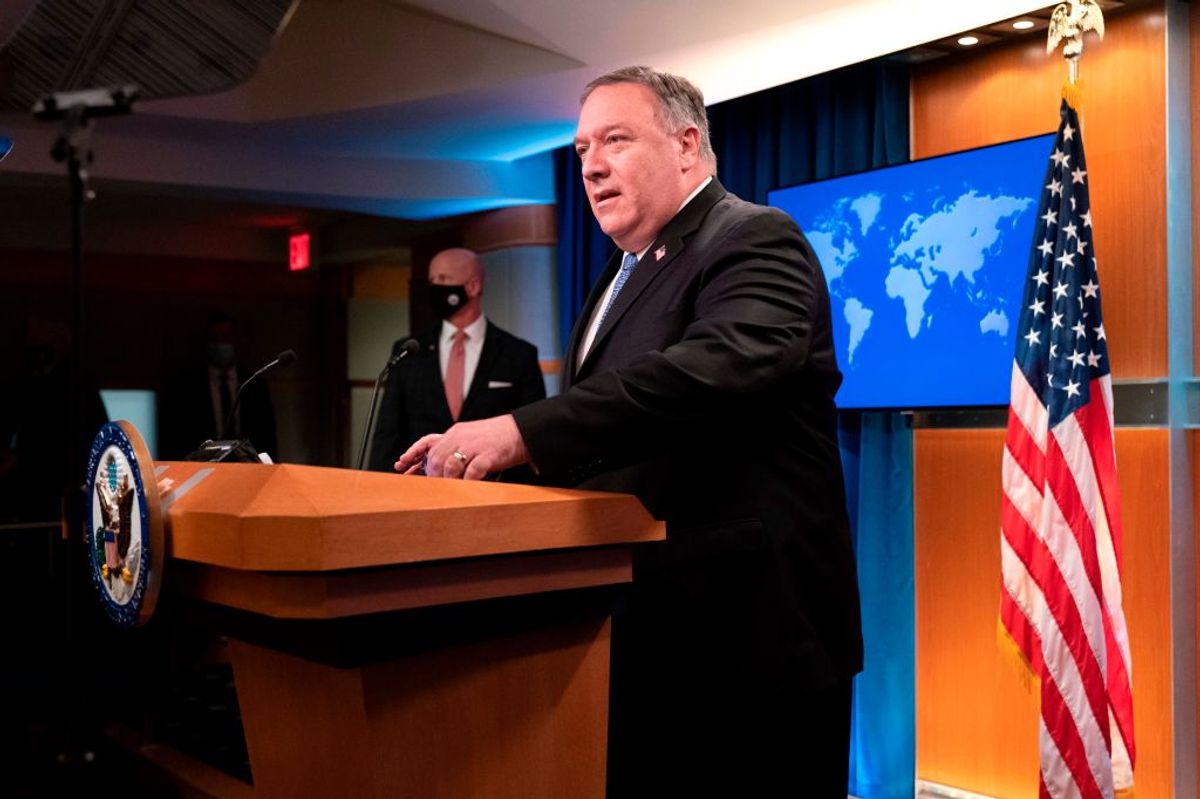 Claim:
On Nov. 10, 2020, U.S. Secretary of State Mike Pompeo said "there will be a smooth transition to a second Trump administration."
Rating:

At a news conference on Nov. 10, Pompeo said "there will be a smooth transition to a second Trump administration."

During a Fox news interview hours later, Pompeo said the department would be prepared no matter who was in the White House in January, and "that's what I was speaking to today."

As U.S. President Donald Trump and his allies attacked the integrity of the 2020 election — a misinformation campaign that culminated with an unprecedented effort to block President-elect Joe Biden's transition into the White House — Secretary of State Mike Pompeo made himself available to reporters for a news conference on Nov. 10.

There, viewers alleged, Pompeo, who is one of Trump's most loyal Cabinet members, made a point to defy results of the popular vote showing Biden as America's 46th president, and promised that "there will be a smooth transition to a second Trump administration."

The alleged comment would mean America's top diplomat publicly denied the outcome of the presidential election, despite the fact that his department advocates for free and fair elections abroad. Simultaneously, by confidently stating Trump would have another term, he undermined a key argument made by Trump and his supporters: The elections process was ongoing due to court litigation and the electoral process, making it unclear whether Trump or Biden would assume the White House on Inauguration Day, Jan. 20, 2021. (We explain the Electoral College and the process for certifying ballots after news media declare winners in presidential races here.)

According to C-SPAN footage of the press briefing (displayed below) as well as a transcript by the White House, Pompeo opened the event by promoting the government's activities in several foreign countries without mentioning the U.S. presidential election. Then, a reporter asked: "Is the state department currently preparing to engage with the Biden transition team, and, if not, at what point does a delay hamper smooth transition or pose a risk to national security?"

There will be a smooth transition to a second Trump administration. Right? We're ready. The world is watching what's taking place here. We're going to count all of the votes. When the process is complete, there will be electors selected. There's a process — the Constitution lays it out pretty clearly. The world should have every confidence that the transition necessary to make sure the state department is functional today, successful today, and successful with a president who's in office on January 20, a minute after noon, will also be successful.

I went through a transition on the front end, and I've been on the other side of this; I'm very confident that we will do all the things that are necessary to make sure that the government, the United States' government, will continue to perform its national security function as we go forward.

In other words, it was accurate to claim Pompeo said "there will be a smooth transition to a second Trump administration," despite the fact that voters picked Biden as the 46th president.

Hours later, Pompeo said in a Fox News interview with host Bret Baier that the state department would be prepared come January, no matter who was in the White House. Per video footage of the interview (displayed below below) and a White House transcript, that exchange unfolded like this:

Pompeo: We’ll have a smooth transition, and we’ll see what the people ultimately decided when all the votes have been cast. We have a process, Bret. The Constitution lays out how electors vote. It’s a very detailed process laid out. We need to comply with all of that.

And then I am very confident that we will have a good transition, that we will make sure that whoever is in office on noon on January 20th has all the tools readily available so that we don’t skip a beat with the capacity to keep Americans safe. That’s what I was speaking to today. I think it’s important for not only the American people but the whole world, especially our adversaries, to know that we will achieve this in a way that’s deeply consistent with the American tradition and keeps us all safe here at home.

In short, he did not answer whether he "was being serious" about promising a smooth transition to a second Trump administration, nor did he use Baier's question as an opportunity to explicitly correct his remark at the press conference.

Additionally, he did not mention the Republican president by name in the Fox News interview, and said the department was a ready for a "good transition" with "whoever is in office on noon on January 20."

In sum, considering video evidence and transcripts of Pompeo's remark at the Nov. 10 press conference — as well as the fact he said afterwards the department would be ready for "whoever is in office" on Inauguration Day — we deem this claim mostly accurate.