According to the UN, ISLAMIC ISIS are Crucifying
and Burning children alive!

SO ISIS is now burning people alive? 45 and have children in a cage ready to burn? Tell me why we are not blowing them off the planet? pigs 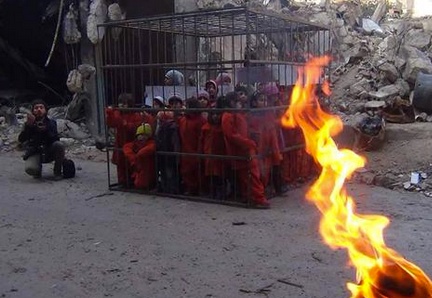 Origins:   In mid-February 2015, a rumor began to circulate online claiming that Islamic State (or ISIS, as the group is commonly called in the United States) either threatened to or had already burned Christian children. The rumor was often accompanied by the unsettling image of a cage full of children clad in orange jumpsuits with a lit torch beside it, suggesting that immolation of the tiny crowd was imminent.

The idea that ISIS might burn captive children was not without precedent, as the circulating images immediately brought to mind the events surrounding the death of Jordanian pilot Muadh who was burned to death in ISIS captivity.

A video of his gruesome execution was released to the internet in early February 2015, provoking global outrage and renewed concern for surviving captives of Islamic State militants. In the widely-viewed clip, Kasasbeh was wearing an orange jumpsuit similar to those worn by the children pictured above before he was burned to death.

The images circulating alongside the rumor about ISIS burning children were genuine, recent, and undoctored photos taken on 2015. They were not, however, photographs of children held in captivity by ISIS and awaiting a fiery, caged execution.

The photos were taken in the Syrian city of Douma during an anti-government protest, and the visual imagery was deliberate, intended to compare the actions of Syrian president Bashar to those of ISIS. The children were not captives of Islamic State or any other entity, and they were never in any danger during the protest outside Damascus.