Is 'Sleepy Eyes' an Anti-Semitic Slur?

The descriptor was used by Nazi Germany as a way to "identify" those of Jewish descent, but researchers say context is key. 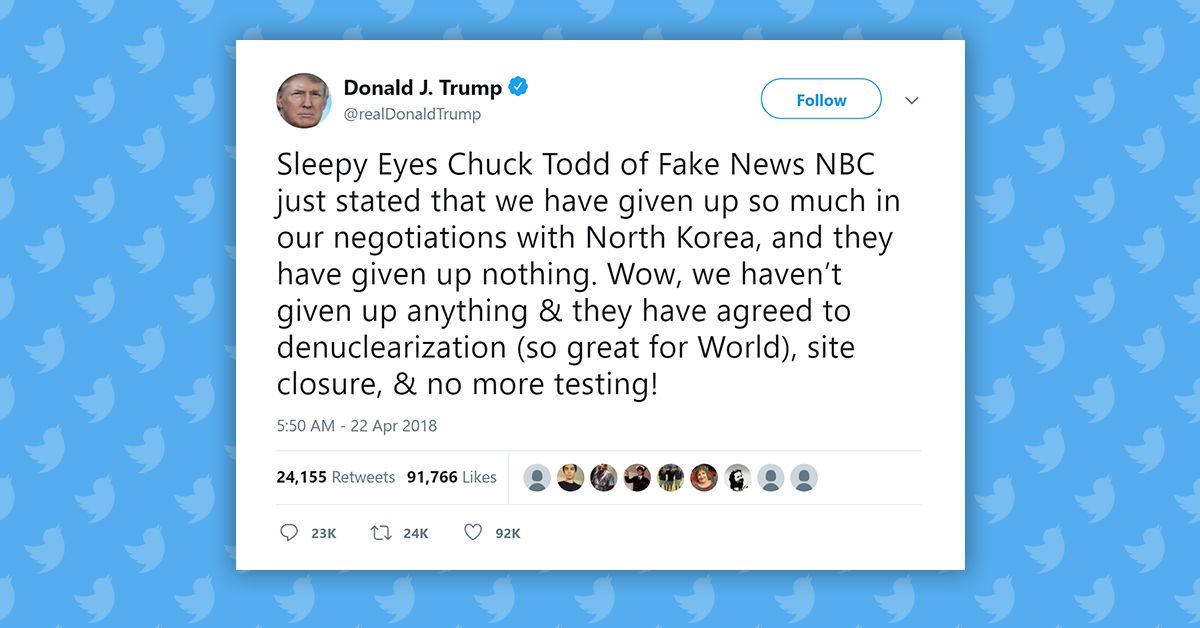 The descriptor "sleepy eyes" in and of itself is not a slur, according to a senior researcher with a Jewish human rights advocacy group.

President Donald Trump came under another round of criticism on 22 April 2018, after tweeting at NBC News host Chuck Todd with a nickname that has long been used in anti-Semitic circles. That day, the president wrote:

Sleepy Eyes Chuck Todd of Fake News NBC just stated that we have given up so much in our negotiations with North Korea, and they have given up nothing. Wow, we haven't given up anything & they have agreed to denuclearization (so great for World), site closure, & no more testing! The remark came after Todd appeared on the Today show to discuss an announcement by North Korea that it would suspend both nuclear testing and launching intercontinental ballistic missiles ahead of both a scheduled summit with South Korea, and a prospective summit with the United States.

"So far, in this potential summit North Koreans have gotten a lot of out it, what has the United States gotten yet?" Todd asked:

We don't have a release of any of those Americans that they've held captive. We don't have a pledge of denuclearization as the ultimate goal. There's a lot of things they are not promising that is raising some red flags.

Aaron Breitbart, the senior researcher for the Simon Wiesenthal Center in Los Angeles, took exception to the criticism surrounding Trump's remark. "I don't think in that context it was meant as an anti-Semitic remark," Breitbart told us. "The [term] 'sleepy eyes' in itself, has no anti-Semitic connotation."

Todd addressed the "sleepy eyes" nickname in an interview published in November 2017, saying that the president thought it was "funny." However, he said, Trump did not give a reason behind it.

"I've asked him what the sleepy eyes means. He doesn't know," Todd said at the time. "He said once 'I give someone a nickname I stay with it. Sometimes I give someone a nickname and I can't remember how I came up with it but I stick with it.'" The Meet The Press host — who was raised in the Jewish religion — added that he did not take offense at being called "sleepy eyes."

Breitbart did confirm that while the descriptor in and of itself is not anti-Semitic, it has been used by white nationalists and Nazis in documents containing "lists" of "telltale" physical markers for Jewish people, including one document circulating online that was promoted by a user on the white nationalist web site Stormfront: An excerpt from the 1938 anti-Semitic children's book Der Giftpilz ("The Poisonous Mushroom") also makes reference to eyes being a Jewish physical "marker":

One can also recognize a Jew by his lips. His lips are usually puffy. The lower lip often protrudes. The eyes are different too. The eyelids are mostly thicker and more fleshy than ours. The Jewish look is wary and piercing. One can tell from his eyes that he is a deceitful person.

The title of Der Giftpilz comes from propaganda distributed by Nazis and Nazi sympathizers:

A mother and her young boy are gathering mushrooms in the German forest. The boy finds some poisonous ones. The mother explains that there are good mushrooms and poisonous ones, and, as they go home, says:

"Yes, mother," Franz replies. "I understand that in dealing with bad people trouble may arise, just as when one eats a poisonous mushroom. One may even die!”

"And do you know, too, who these bad men are, these poisonous mushrooms of mankind?" the mother continued.

Franz slaps his chest in pride:
"Of course I know, mother! They are the Jews! Our teacher has often told us about them."

Ultimately, Breitbart told us, one must consider the source when trying to determine whether "sleepy eyes" is being used as an anti-Semitic insult.

"If a guy says, 'You've got sleepy eyes,' generally that means I look tired," he said. "To me that's not an anti-Semitic remark."