Social media posts showed someone slashed the tires on nearly all of the cars parked at a Minneapolis Kmart located near George Floyd protests. 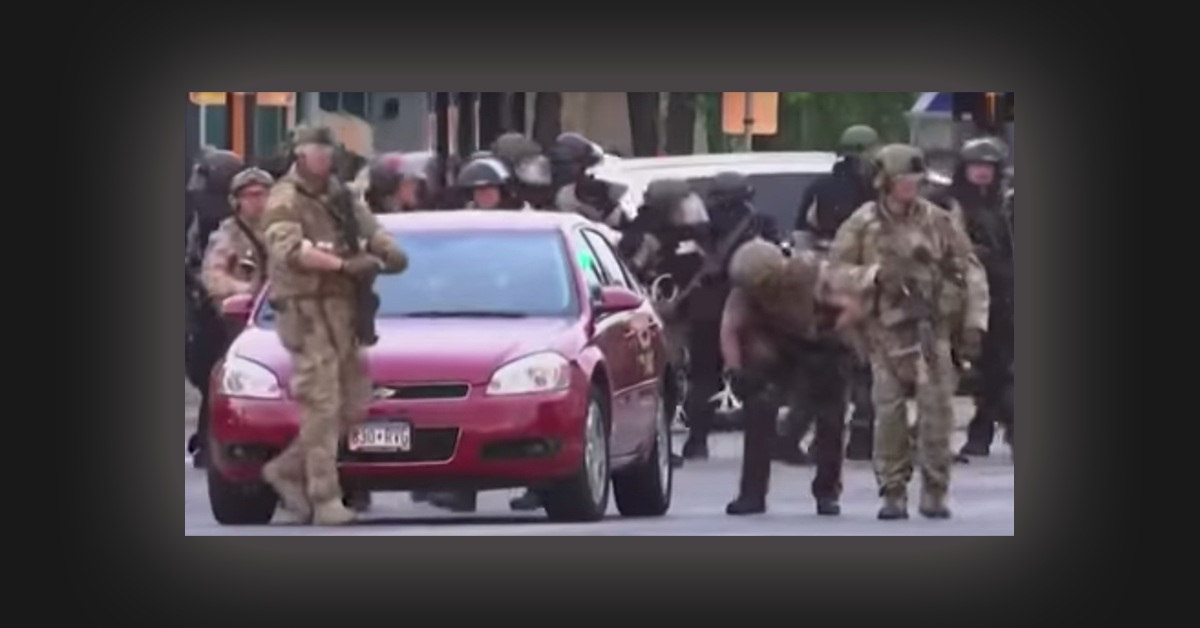 Claim:
Law enforcement officers in Minnesota slashed the tires of cars parked near demonstrations against police brutality in May 2020.
Rating:

On May 30, 2020, amid a militarized police operation aimed at quelling unrest in the streets of Minneapolis following the death of George Floyd, an unarmed Black man who died after a white police officer knelt on his neck for nearly nine minutes, the tires on numerous cars in a Kmart parking lot located near some demonstrations were slashed. Several videos showed what appeared to be law enforcement officers slashing these tires, and posts on social media indicated that tires on most if not all of the cars in this lot were slashed. Video also showed law enforcement officers slashing tires parked on a street the next day.

These events, featured in a story in Mother Jones magazine, were well-documented, in part because numerous journalists and news producers were among those whose tires were slashed. This included Star Tribune reporter Chris Serres, New Yorker reporter Luke Mogelson, WCCO news anchor Jeff Wagner, Radio Canada reporter Philippe Leblanc, and Los Angeles television producer Andrew Kimmel. Speaking of the parking lot when he returned to his car, Kimmel said that “every tire on my rental car” had been slashed “as well as every tire of every car in this parking lot.” Serres told the Star Tribune that, “As far as I could see, it looked like all their tires had been slashed.”

As videos of these events emerged, so too did denials. These came from various law enforcement agencies including the Minneapolis Police Department, the Hennepin County Sheriff’s Office, and the National Guard.

On June 8, however, two law enforcement agencies confirmed to the Star Tribune that they had punctured the tires: the Minnesota State Patrol and the Anoka County Sheriff’s Department. Department of Public Safety spokesman Bruce Gordon, whose department oversees the State Patrol, confirmed to the Star Tribune that troopers cut tires in “a few locations”:

“State Patrol troopers strategically deflated tires ... in order to stop behaviors such as vehicles driving dangerously and at high speeds in and around protesters and law enforcement,” Gordon said.

Gordon said the patrol also targeted vehicles “that contained items used to cause harm during violent protests” such as rocks, concrete and sticks.

“While not a typical tactic, vehicles were being used as dangerous weapons and inhibited our ability to clear areas and keep areas safe where violent protests were occurring,” he said. … Deputies from Anoka County followed state orders and joined the patrol and also cut the tires on vehicles on Washington Avenue, said Anoka County Sheriff’s Lt. Andy Knotz.

By email, Snopes sent a detailed list of questions to Gordon requesting further clarification on a range of issues, including the apparent disconnect behind the idea of cutting tires when threatening objects were allegedly located inside, and the video or firsthand accounts indicating that every car in the Kmart parking lot had their tires slashed. We asked what purpose slashing tires would serve in cases where dangerous objects had been located, if any of the cars located in the Kmart lot contained dangerous items, and if any arrests had been made or charges brought against any of the individuals whose tires had been slashed. In response, we were sent what appears to have been, in effect, the same statement on which we were seeking clarification. Our response to that email has not been returned at the time of this reporting.

In sum, we do not know what specific order these officers were following, but the law enforcement agencies the officers work for — the Minnesota State Patrol and the Anoka County Sheriff’s Department — confirmed that the actions did take place. As such, the videos authentically show actions taken by Minnesota law enforcement officers during George Floyd protests in late May 2020.