Imagine scooting around in something like a cross between the Segway and the Smart car. 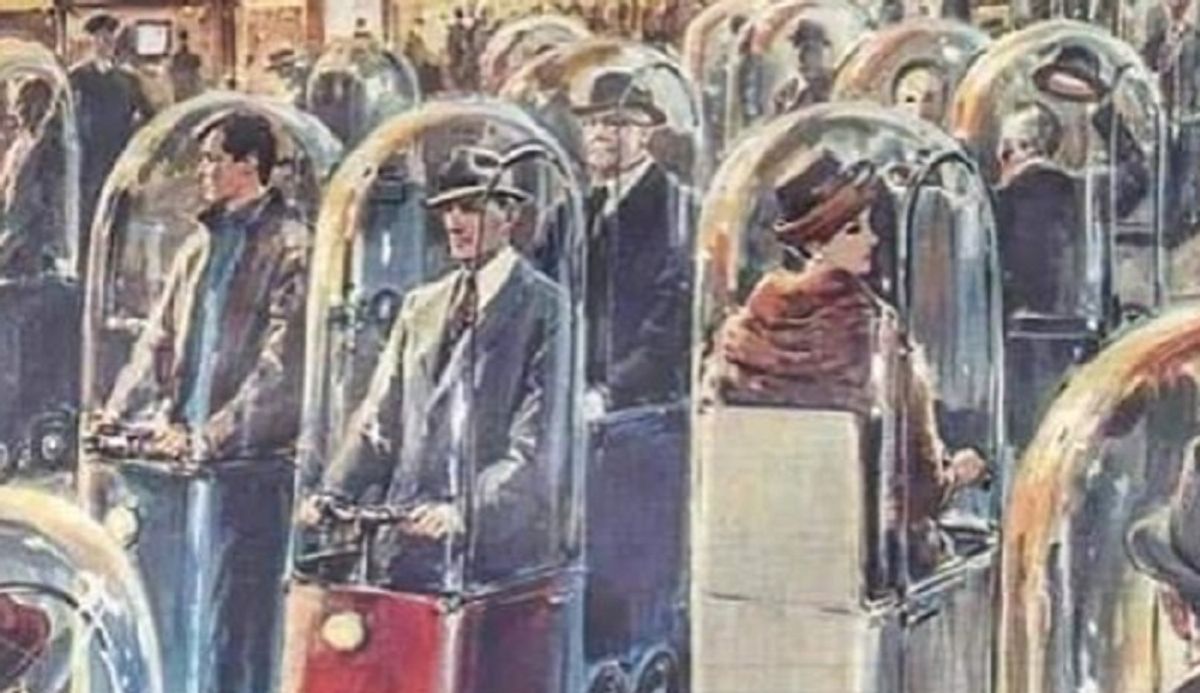 Claim:
An illustration from a 1962 Italian magazine shows an imagined scene from the year 2022.
Rating:

An article from a 1962 edition of the Domenica del Corriere newspaper envisions drivers in futuristic, dome-enclosed, single-person vehicles.

We haven't found any information documenting that this article was specifically envisaged as presenting a scene from the year 2022.

In May 2020, social media users circulated an illustration said to be from a 1962 magazine, envisioning what life would look like in 2022, 60 years in the future. The graphic struck many viewers as being an eerie premonition of the social distancing restrictions and other measures necessitated by the COVID-19 coronavirus disease pandemic of 2020:

This graphic was indeed published in the December 16, 1962, edition of La Domenica del Corriere (Sunday Courier), an Italian weekly newspaper. The image was used to illustrate an article about the Singoletta (or singlet), single-passenger vehicles of the future envisioned as a way of alleviating urban traffic gridlock: The Singoletta was envisioned as something we might think of as a cross between the two-wheeled Segway Personal Transporterand the Smart car, a motorized, four-wheeled scooter operated by a driver enclosed in a transparent dome to protect against weather and other environmental factors:

[Singoletta] was the name of a vehicle halfway between the Smart and the Segway, the electric two-wheeler invented by Dean Kamen in 2001, imagined as a future solution for metropolitan traffic jams. It was designed by the great Walter Molino as shown on the back cover of "La Domenica del Corriere" edition of 16 December 1962.

The Singoletta travelers would have driven a sort of four-wheeled scooter while standing upright. To protect them from the weather, they would be enclosed in a semicircular transparent dome with windows on either side. The passenger compartment would be accessed through a door with a handle. The Singoletta's small footprint would have allowed drivers to leave space on the roadway for other vehicles akin to the Segway (such as the Piaggio MP3), go in any direction without creating too much havoc, and even greet --- by raising their hat -- acquaintances who crossed their path while at the wheels of similar vehicles.

"Here is how the traffic problem in cities could be eased if not completely solved: in place of traffic-jam causing modern automobiles, tiny single-seater cars called 'singlets' that occupy a minimum of space."

Although the Domenica del Corriere article described the Singoletta as a potential vehicle of the future, we haven't found any information indicating that the article specifically presented it as something that would be in common usage in the year 2022 (rather than just sometime in the indefinite future), so we've rated this item as a "Mixture" for now.