Is This a Single Drop of Seawater Magnified 25 Times?

Copepods, cyanobacteria, and diatoms — oh my! 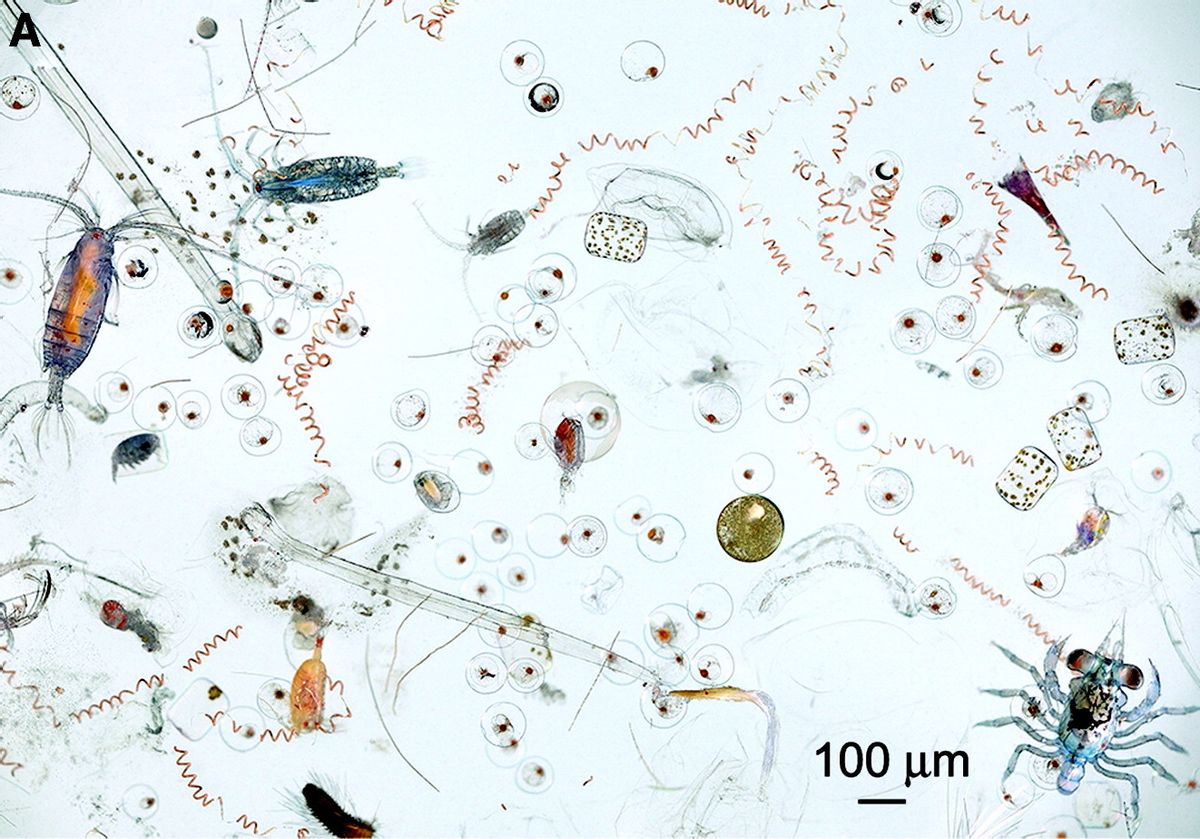 Claim:
A photograph shows microplankton and other organisms found in a single drop of seawater magnified 25 times.
Rating:

It is true that the photograph in question shows the many microscopic organisms found within a sample of seawater. However ...

The photograph showed a sample of "one dip of a hand net," not one drop of seawater as the popular meme suggested. That sample was magnified 2X, not 25 times.

For more than a decade, a photograph said to showcase marine microplankton has surfed the internet, with varying accounts of the exact details under what circumstances the photo was captured.

We came across the photograph on social media in a Tweet that was posted on March 29, 2022.

A reverse image search through Google Lens revealed that the photograph had been featured by a number of publications including The Verge and New Scientist, both of which credited the digital art website Colossal. We found that the photograph was also shared on Wikipedia Commons, a public domain site that shares credible imagery that is free for public use. We cross-referenced the photograph and confirmed that it featured marine microplankton, small organisms floating through the water column, that were “part of the contents of one dip of a hand net.” It was captured on board the NOAA ship Oscar Elton Sette off the coast of Kona, Hawaii, on Sept. 20, 2006.

Since the initial publication of the photograph in 2006, it has also been published in peer-reviewed scientific literature, including in the journal Astrobiology and Law Culture and the Humanities. This tells us that the image in question is indeed authentic, though some subtle details are still missing from the general claim. The journal Astrobiology listed the image author as photographer David Liittschwager (among others), who described the image on his website as having showed the “contents of one dip of a hand net.”

But neither the public domain photo nor Liittschwager’s website said that the seawater was magnified at 25 times or that the sample was made up of a “single drop” of seawater. In a 2014 Facebook post, Liittschwager was credited as having corrected the caption slightly:

Marine Microfauna - part of the contents of one dip of a hand net. The magnification was 2x life size, meaning that the actual frame size was a half inch high, so depending on how big the image is on your screen you can calculate the magnification as you see it. To keep as much focus as possible the sample is in as little water as possible just covering the bottom of a 60mm petri dish. That takes about 15 drops of water, but you are only seeing a very small portion of the total sample.

We contacted Liittschwager for further confirmation about the photo, including at what rate was the seawater was magnified and if it was, in fact, a single drop or a sample of many. He confirmed the quote above, and added that the sample contained much more than a "single drop.

"The volume of water and creatures I imagine was 15-20 drops, of a concentrated sample, in a 60mm petri dish, only a portion of which is shown in the picture, but is is certainly more than one drop," he told Snopes in an email. Liittschwager also referenced our team to a National Geographic article reported by Jennifer Holland, who quoted oceanographer Mark Ohman as having said that "the image contains diverse planktonic organisms, ranging from photosynthetic cyanobacteria and diatoms to many different types of zooplankton, including both holoplankton (permanent residents of the plankton) and meroplankton (temporary residents of the plankton, e.g., fish eggs, crab larvae, worm larvae)."

Update [April 18, 2022]: Rating was updated from "Research in Progress" to "Mixture" following an email exchange with the photographer.