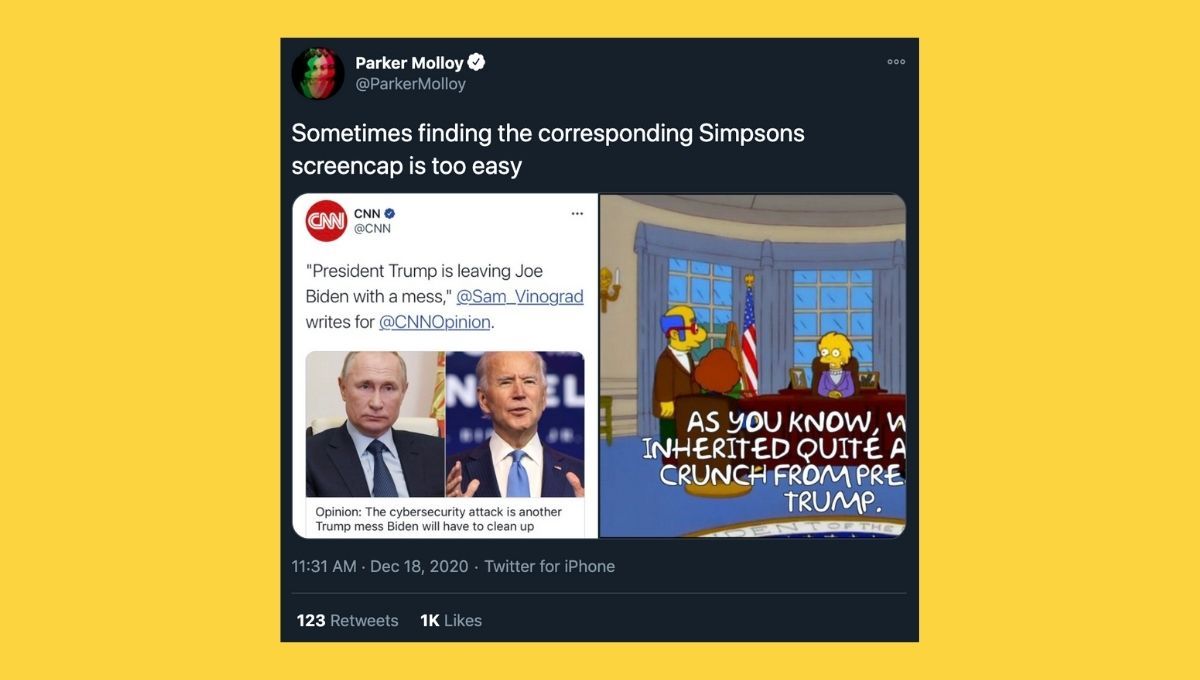 Claim:
In an episode of "The Simpsons" from 2000, Lisa Simpson said: "As you know, we've inherited quite a budget crunch from President Trump."
Rating:

Over the years, we've reported on a number of purported "predictions" that appear at a glance to be solid crystal ball work by writers for "The Simpsons." These included false claims that episodes of the long-running series predicted U.S. President Donald Trump would be elected president, try to buy Greenland, and touch a glowing orb. Often these "predictions" turned out to be based on altered images or misquoted scenes. So color us refreshed when we found this genuine quote from an episode aired in 2000.

On Dec. 18, 2020, Parker Molloy, editor-at-large with Media Matters for America, tweeted this image and caption:

The quote from "The Simpsons" was genuine. Lisa Simpson, having been elected president, said: "As you know, we've inherited quite a budget crunch from President Trump." The line was from "Bart to the Future," episode 17 of season 11. It first aired on March 19, 2000.

The CNN opinion piece cited in Molloy's tweet indeed included the quote: "President Donald Trump is leaving Joe Biden with a mess." The story was about cyberattacks and not the budget or national debt. However, in May 2020 the conservative Fox News Channel reported that Trump was "poised to add more debt than Obama" in his first term:

President Trump, thanks to high deficits in his first two full years in office followed by massive federal expenditures aimed at offsetting the economic effects of the coronavirus crisis, is on pace to add more to the national debt in his first term than did former President Barack Obama, whom Republicans often criticized for irresponsible spending.

There's no predicting what will be predicted in future episodes, as the 33rd season of "The Simpsons" appeared to be delayed due to the coronavirus pandemic. However, Al Jean, a longtime writer and producer for the show, tweeted in September that Zoom table-reads, or rehearsals, were underway: