Did 'The Simpsons' Predict Astroworld Tragedy?

"The Simpsons" aren't nearly as good at making predictions as the internet seems to think. 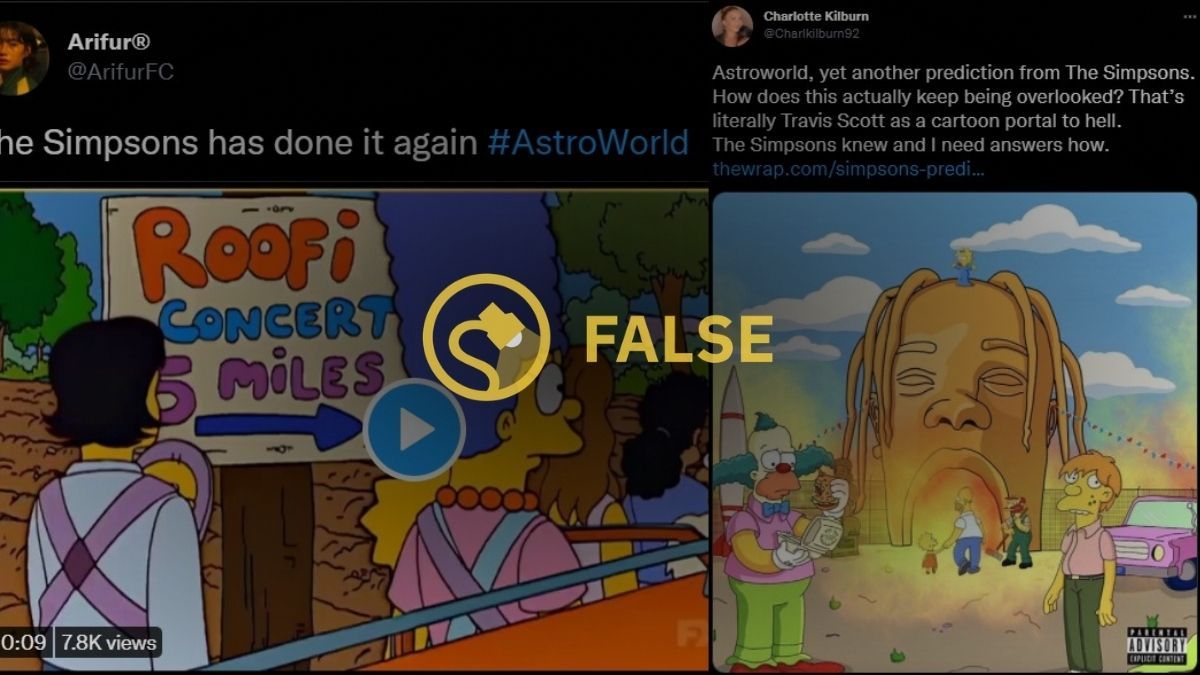 Claim:
"The Simpsons" predicted that nine people would die at Astroworld Fest in 2021.
Rating:

In November 2021, shortly after nine people were killed and dozens more were injured during a crowd crush incident at musician Travis Scott's Astroworld Festival, a rumor started circulating on social media that the tragic incident had been predicted by the long-running animated show "The Simpsons."

This claim was accompanied by various videos and images, the most popular of which was probably the following which supposedly showed various Springfield residents next to a monument of Scott: This is not an official image from "The Simpsons." This is a piece of fan art that was created circa 2018. As this image did not appear in an episode of "The Simpsons," it clearly isn't a prediction from the long-running show.

Others based their false claim that "The Simpsons" predicted the Astroworld tragedy by sharing a genuine clip from the show's 15th season.

This is a genuine clip from "The Simpsons" episode titled "Marge vs. Singles, Seniors, Childless Couples and Teens, and Gays," which aired in 2004. While Marge criticizes the conduct of a concert promoter, this is not a prediction. Marge's comment is very generic and makes no specific references to Travis Scott or Astroworld. Like so many of the "prediction" rumors regarding "The Simpsons," this character is commenting on an issue that was well known at the time, not predicting some incident that would take place in the future.

Another piece of "evidence" to circulate in support of this claim come from the show's 23rd season. In the episode "Judge Me Tender," Homer can be seen holding a newspaper clipping featuring Bat Boy, a character invented by the infamous tabloid Weekly World News. In November 2021, social media users shared this image and noted that Travis Scott promoted Astroworld fest with artwork that was also inspired by Bat Boy.

This, again, is not a prediction.

The character of Bat Boy has been around since 1993 and is one of the most well-known examples of the outlandish and untrue stories that populated supermarket tabloids. The character has been on T-shirts, toys and other merchandise, was the focus of an off-Broadway musical, and has served as a template for photoshopped images of politicians. In other words, it isn't particularly unusual for someone to make a reference to this tabloid character.