Did 'The Simpsons' Mayor Say He Canceled Trip to the Bahamas While in the Bahamas?

A clip from "The Simpsons" was shared on social media after reports that Sen. Ted Cruz had traveled to Cancun after a winter storm caused massive power outages in Texas. 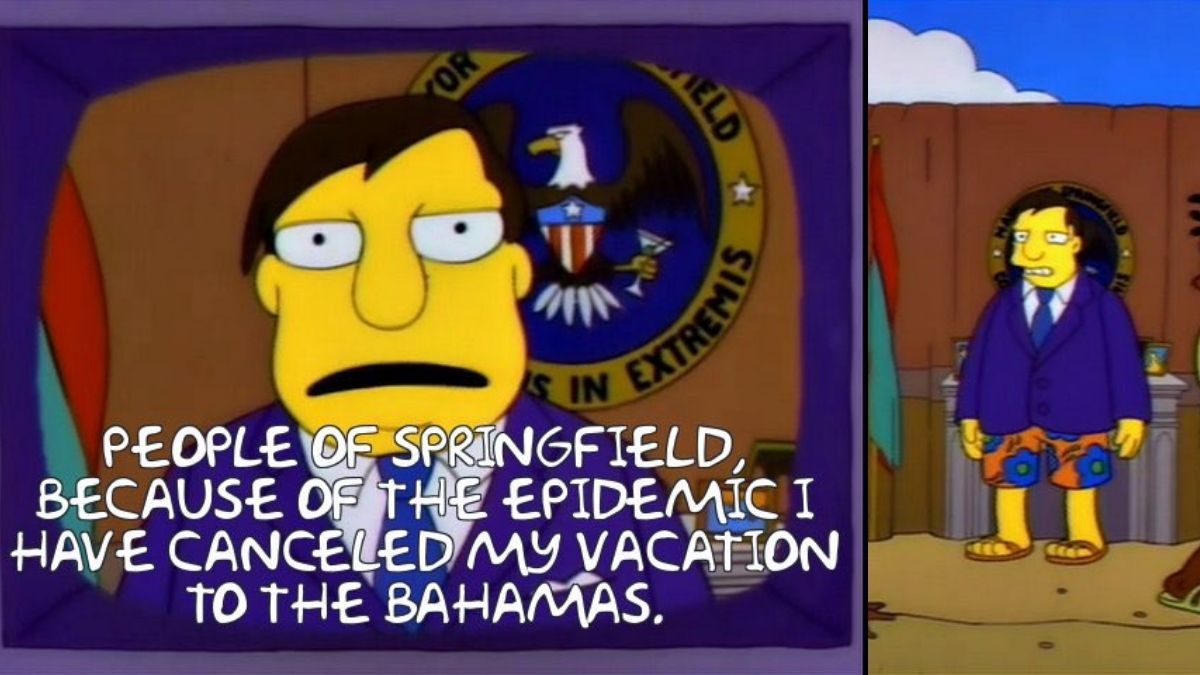 Claim:
In an episode of "The Simpsons," Mayor Quimby says he is canceling a trip to the Bahamas while he's in the Bahamas, because of an ongoing epidemic.
Rating:

On Feb. 18, 2021, reports circulated on social media that U.S. Sen. Ted Cruz had traveled to Cancun with his family as a massive winter storm left many of his constituents without power. As the Texas Republican was widely criticized on social media, some started sharing a set of images from the animated show "The Simpsons" that showed Mayor Quimby making a similar decision.

As "The Simpsons" are often subjected to false rumors of "predictions" and other photoshopped trickery, some viewers may have been uncertain about the authenticity of these images. But these clips capture a real scene from "The Simpsons" and a genuine quote from Springfield's fictional mayor.

These images come from the penultimate episode of "The Simpsons" fourth season entitled "Marge in Chains" which starts with a brief montage showing the start of an epidemic, dubbed the "Osaka Flu," which traveled to Springfield via a shipment of "Juice Looseners" from Japan. (Interestingly, clips from this episode were also used in a false rumor about "The Simpsons" predicting the COVID-19 pandemic.)

As Springfield deals with the epidemic, Quimby films a public address to inform the public that he was cancelling his trip to the Bahamas to deal with the town's problems. It's then revealed that Quimby was actually filming this address from the Bahamas.

Quimby says: "People of Springfield, because of the epidemic, I have canceled my vacation to the Bahamas. I shall not leave the city. Hey, you, get that steel drum out of the, uh, mayor's office."

Here's a glimpse of this scene:

This isn't the first time that this clip from "The Simpsons" has been circulated to criticize a public official who seemingly abandoned their constituents in a time of crisis. In December 2020, it was revealed that Steve Adler, the Democratic mayor of Austin, Texas, had filmed a video urging his constituents to abide by a "stay at home order" to battle the pandemic while he was vacationing in Cabo San Lucas.

After initially saying he didn't do anything wrong, Steve Adler, the mayor of Austin, Texas, says he now realizes he "set a bad example" by traveling to Cabo San Lucas, Mexico, for vacation last month.

An Austin American-Statesman story revealed Wednesday that Adler attended an in-person wedding for his daughter in early November and then flew with others to Cabo for a weeklong vacation.

At the same time, Adler was encouraging people to stay home to avoid contracting or spreading COVID-19.