Either way, we love the character name "Groundskeeper Willie." 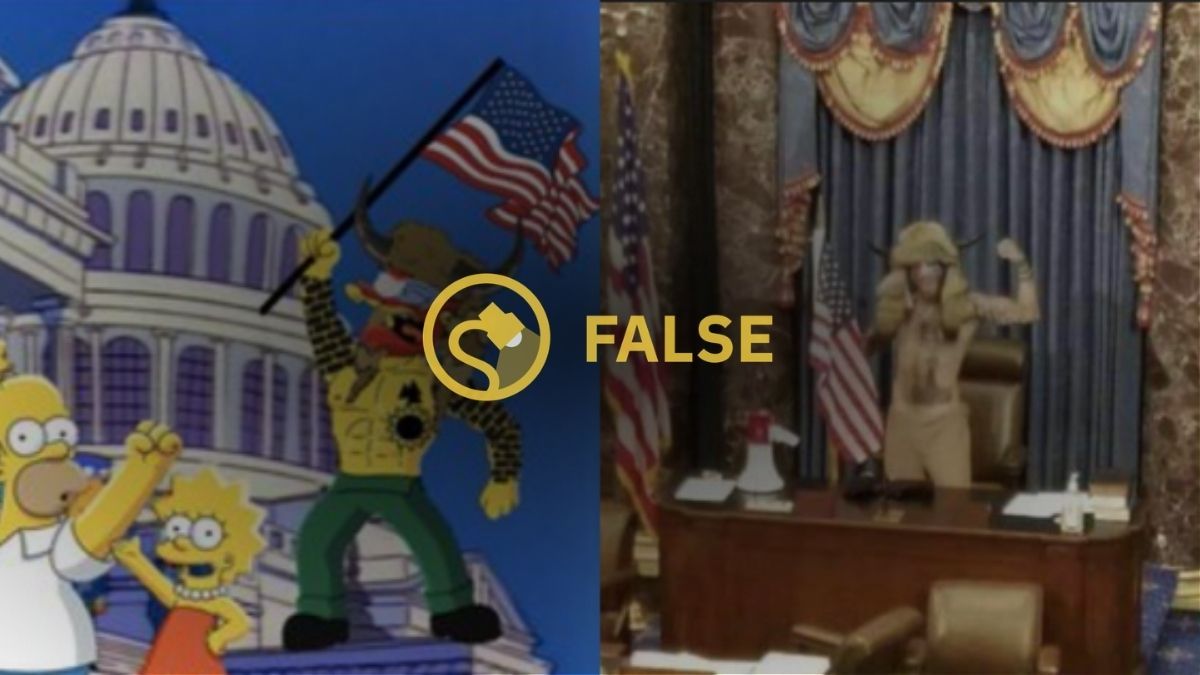 Claim:
The character Goundskeeper Willie was once depicted in an episode of "The Simpsons" in similar horned attire worn by one of the pro-Trump rioters in D.C. on Jan. 6, 2021.
Rating:

After any major news event, a rumor is bound to circulate claiming that it been "predicted" by the long-running animated show "The Simpsons." While these "prediction" rumors rarely prove true — "The Simpsons" are almost always commenting on a past event, not a future one — this hasn't stopped these poor prognostications from gaining traction on social media.

On Jan. 7, 2021, the day after a pro-Trump mob stormed the U.S. Capitol, rumors started circulating that the show had predicted some of the day's most viral incidents. For example, an image made the rounds that supposedly showed the character Groundskeeper Willie dressed in horned attire similar to the costume worn by one of the pro-Trump rioters. The photograph on the left was truly taken on Jan. 6 inside the U.S. Capitol and shows Trump supporter and QAnon conspiracy theorist  Jake Angeli. The image on the right is a digitally edited composite that never actually aired on "The Simpsons."

An uncropped version of the Groundskeeper Willie image (below left) shows the entire Simpsons family standing outside of the Springfield Capitol. In the full image, it's clear that Marge, Homer, Lisa, Maggie, and Willie were cut and pasted over an image of the Springfield capitol. More importantly, the original version of the Willie image does not feature tattoos, a horned helmet, or an American flag. Rather, it simple shows Willie screaming about something (most likely haggis) as seen on the right: This wasn't the only "prediction" rumor to circulate on social media. Others claimed that show had predicted the violence at the Capitol and cited as evidence an image of Homer sitting on his roof overlooking a dystopian Springfield: This is an authentic image from "The Simpsons" (with the exception of the text on the bottom) but we'd scoff at calling it a prediction.

This image comes from the show's Treehouse of Horror episode that aired in October 2020 ("Treehouse of Horror XXXI" Season 32, Episode 4). The opening of the annual Halloween episode shows Homer attempting to cast his ballot in the 2020 election. Homer is undecided, but then Lisa reminds him of all of U.S. President Donald Trump's controversies. Homer marks his ballot, but then we see that it was a dream sequence. When Marge scolds Homer for sleeping all day and not voting, Homer responds, "What's the worst that could happen?" before the dystopian view of Springfield shown above appears on screen.

The screenshot from this episode that went viral in January 2021 is not a "prediction."

For one, robots have not taken over the United States, lava isn't pouring up from the ground, and the vast majority of the population is not stationed on their roofs with guns. The "Simpsons" was not predicting the future. Rather, this clip feels more like an extreme "warning" about what could happen if people decided not to exercise their right to vote.