Is This a Solid-Silver Audi?

Is this luxury automobile silver-colored ... or actually made of silver? 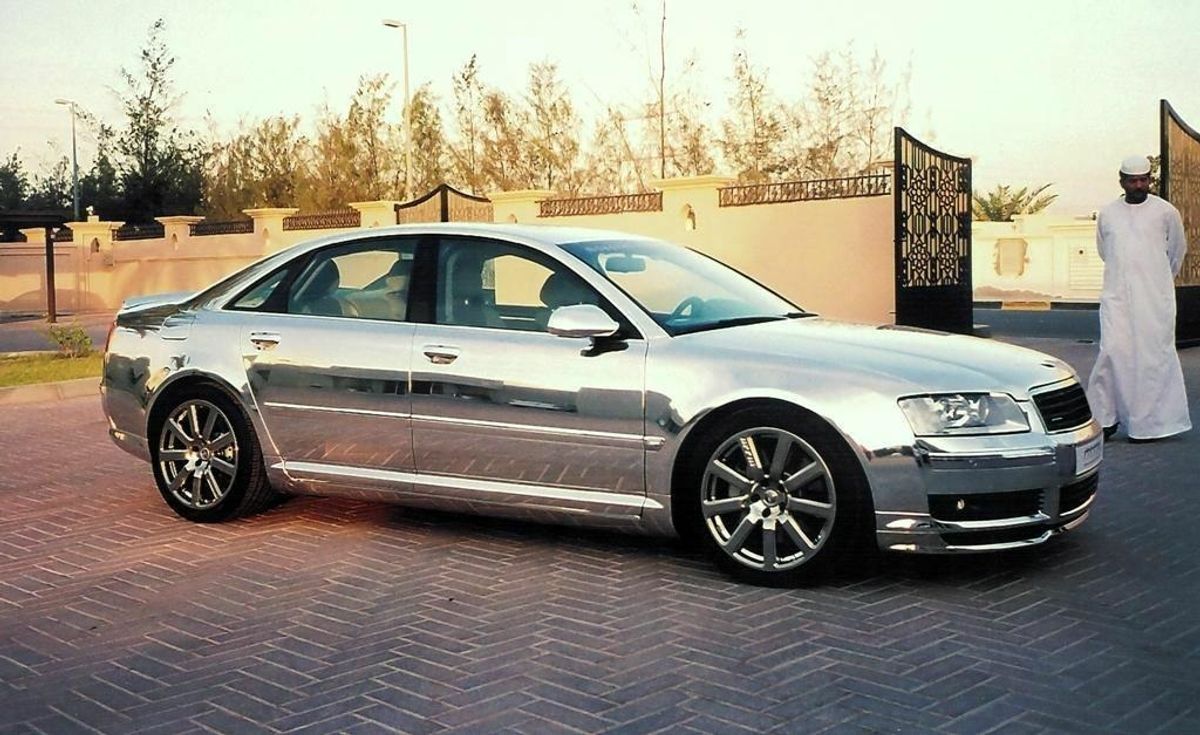 When you are a Saudi Sheik or a CARDIOLOGIST - It really doesn't matter; when you can have your automobile custom made from .999 Pure Silver... I wish I could afford to be around with the money when he goes to trade it in....

The weight was almost tripled and it required special tires to support the load as well as all of the "Shock Absorber System". I couldn't afford the Tail Pipes! I would have to keep an "Uzi" beside me if anyone dared to scratch it or dent it! How long do you think this would last in the 5th ward of Houston, Texas to avoid a "Car Jacking"?

The "Good Ole American Dollar" helped pay for this "Toy"!

I guess the camel jockey sheik who owns this car isn't worried about how much money it takes to fill it up with gasoline!!!

The ultimate vanity possession, I guess.

Why oil is so expensive?

Wonder where our petro dollars go?

The pics are of an Audi A8 in silver made for a Sheik - - It is not silver colored... it is made of silver!! The photographs displayed above are genuine, but they don't quite depict an automobile "made from solid silver." The shiny appearance of the Audi A8 pictured here is not due to its being made of silver, but to a customization involving a special polishing technique used to produce a chrome-like finish, for which the car's Dubai owner engaged the firm Motoren Technik Mayer (MTM), based in Wettstetten, Germany. The MTM web site describes (in slightly stilted English) the process used in the Audi's customization:

In Dubai the MTM polished Audi A8 was an eye-catcher. The car was analyzed and after a good deal of study the enamel varnish of the aluminum car body was removed. Then the car was cleaned. After that, the car body was polished with fine abrasive paper and specially polished to a high gloss. The end result must not have any defects, because retouching is not possible. Finally, the car was coated with a special clear varnish to protect against environmental impacts.

Because of the fact that it is impossible to polish plastic parts like front and rear spoilers, mirror house, side sillboard, or the fuel tank cap, they were enameled in a complex way to get a chrome effect. Finaly they were polished with clear varnish.

The MTM photo gallery displays the same three exterior photographs shown above, as well as three additional pictures of the car's interior.