She's in the Attic!

"She couldn't remember her lines, her delivery was amateurish, and the more she rehearsed, the worse she got." 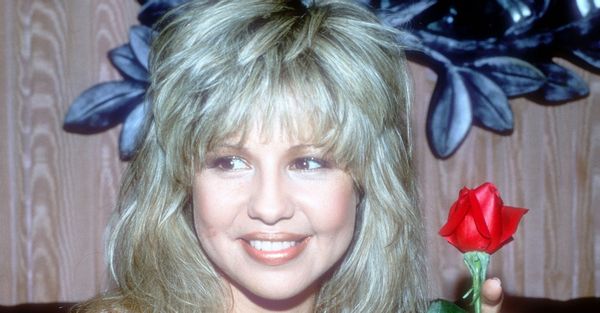 UNDATED: Pia Zadora poses at the premiere party in New York City for her movie "Butterfly" in this undated photo. (Photo by Yvonne Hemsey/Getty Images)

Claim:
An actress' stage performance as Anne Frank was so bad that audience members yelled 'She's in the attic!' when Nazi soldiers arrived onstage.
Rating:

Just about every field of endeavor whose practioners are necessarily placed in the public eye (e.g., politics, entertainment, sports) has a common set of "denigration legends" — just pick the out-of-favor personality of the moment, slap his or her name into a familiar anecdote, and voilà... you have a ready-made, time-tested, believable "true story" guaranteed to make anyone sound like the one of the biggest boobs on the planet. That such anecdotes are usually fictitious (or at the very least don't involve the people to whom they are later ascribed) doesn't seem to detract from the fun.

In the acting world, the legend about an actress whose performance in the lead role of a stage production of the The Diary of Anne Frank was so woefully bad that fed-up audience members gleefully shouted "She's in the attic!" when Nazi soldier characters arrived on stage at the end of the play to haul off the hiding Frank family has been applied to any number of female thespians perceived by the public as talentless hacks who landed starring roles only through their looks and/or their connections, not because of their (marginal) acting abilities:

In one of my films they had a young bit player who was very pretty, but a terrible actress. However, she was very ambitious and decided that if she got some experience in the theater, it would help her career. Fortunately, she had a wealthy boyfriend who backed a road company of The Diary of Anne Frank just so she could play the leading role — Anne Frank.

Before the opening in Cleveland, Ohio, they had three weeks of intensive rehearsals, and every day was more and more frustrating for the director. The actress was impossible. She couldn't remember her lines, her delivery was amateurish, and the more she rehearsed, the worse she got. The director was ready to quit the show, but she told him she was a poor rehearser. "Believe me," she assured him, "when I face that opening-night audience, it'll all come together."

She invited me to the opening night, but I was not all that anxious to see her perform, and I had even less desire to be in Cleveland in February. A friend of hers and mine did go, and later he told me what I'd missed.

When the curtain went up she blew her opening lines, and her performance went downhill from then on. By the intermission the audience was totally fed up with her. Then, in the first scene in the second act, when the Nazi soldiers broke into the home, overturning furniture and shouting, "Where is she? Where's Anne Frank?!" the whole audience yelled back, "She's in the attic!"

Throughtout the 1980s and 1990s, this anecdote was most persistently associated with actress/singer Pia Zadora (although for a brief period it was also attached to Vanna White, the letter-turning hostess of television's Wheel of Fortune game show, who received scathing reviews when she tried her hand at acting by starring as Venus in the 1988 made-for-TV movie Goddess of Love).

Why Pia Zadora? At the time, Ms. Zadora was a well known celebrity of modest talent who had achieved prominence through the efforts of a wealthy benefactor. Her acting career consisted mainly of small, unimportant parts in Broadway productions until she married Meshulam Riklis, a mega-millionaire thirty years her senior, in 1977.

Through her well-to-do husband's influence, Pia became a familiar face due to her appearances as the Dubonnet Girl in print ads and television commercials for the Dubonnet brand of apéritif wines (which were distributed by a company owned by Riklis) and eventually landed a role in the 1981 film Butterfly, a performance that won her a Golden Globe award as 1981's "Best New Star of the Year."

However, rumors soon begin to circulate that Pia's husband had "bought" her Golden Globe award by funding lavish junkets to Las Vegas for members of the Hollywood Foreign Press Association, and outside the Golden Globe community Pia's Butterfly performance was somewhat less critically acclaimed, garnering her two Golden Raspberry awards (commonly known as "Razzies") in 1982 for "Worst Actress" and "Worst New Star." She then achieved even more notoriety by winning the "Worst Actress" award again the following year for her lead role in the film version of Harold Robbins' The Lonely Lady, a movie that was nominated for a record eleven Golden Raspberry Awards (including "Worst Picture of the Decade"). That pair of dubious performances led to Ms. Zadora's being named the Golden Raspberrys' "Worst New Star of the Decade" for 1980-1989.

Whatever one might think of Pia Zadora's acting abilities (save for a few bit parts, her film career ended with 1984's Voyage of the Rock Aliens), this tale doesn't ring true about her: she never had a starring role in a stage version of The Diary of Anne Frank -- on Broadway, off-Broadway, or anywhere else. Moreover, every telling of this anecdote we've encountered is either related in a vague, indefinite way (i.e., it involved some unnamed actress and took place sometime in the indefinite past) or was clearly a case of someone's repeating a good story he heard as if it were an event he actually witnessed.

Take, for example, the version of this legend cited at the head of this article, which appeared in a book written by comedian George Burns in 1996. It's highly unlikely that, as he claimed, George Burns ever made a movie with an actress who was taunted by the audience while she was playing the lead in The Diary of Anne Frank, as Burns didn't appear in a theatrical film between 1939 (before Anne Frank even started keeping a diary) and 1975 (by which time this legend was already well-traveled).

Moreover, at no point in a standard staging of The Diary of Anne Frank do Nazi soldiers or German police characters appear on stage looking for Anne Frank and inquiring into her whereabouts — they're simply an unseen presence heard pounding on the downstairs door of the annex in which the Frank family and other fugitives are hiding at the end of the play's penultimate scene.

This legend is an amusing but apocryphal "bad actress" story.

Sightings:   In an episode of TV's The Golden Girls, Dorothy Zbornak (Bea Arthur) delivers this legend as a standard put-down of an actress her roommates have engaged for the lead in a community theatre production. In the 1988 Jay McInerney's novel Story of My Life, Allison's acting teacher tells the urban legend of an unnamed actress who was being bankrolled by "a rich guy who wanted to make her a big star so he was basically buying her the starring roles in these plays."