The encounter was recorded ... and then the footage went viral. 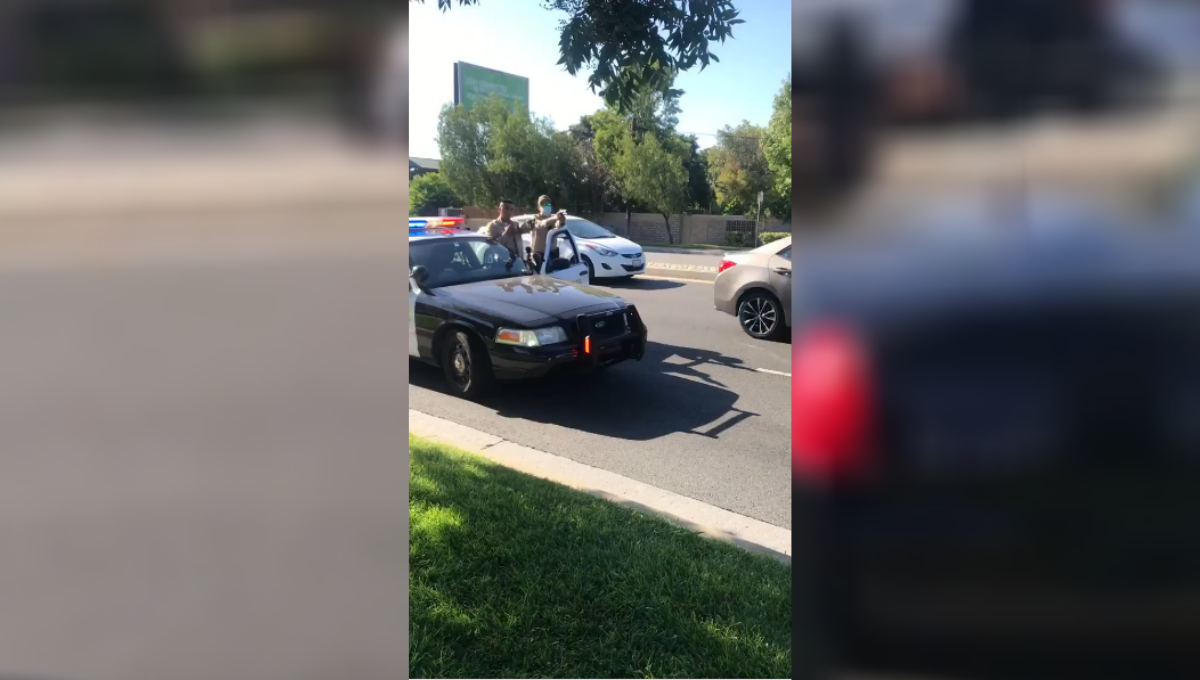 Claim:
While responding to a 911 assault report, Los Angeles County sheriff's deputies pointed firearms at teenagers — two of whom were Black — after witnesses said the teens themselves were the victims of an attack by a knife-wielding man.
Rating:

On Aug. 8, 2020, Instagram user Tammi Collins posted an 11-minute video. She said it showed Los Angeles County sheriff's deputies wrongly pointing guns at her 16-year-old son and two of his friends who she says were the victims — not the perpetrators — of an assault at a bus stop the day before in Santa Clarita.

The footage was viewed more than 275,000 times, and sparked a wave of social media posts denouncing the deputies' actions in the following days, including a tweet that said:

The L.A. County Sheriffs are under fire again after point guns at [sic] black teens who actually needed their help following several 911 calls. deputies roll up as several other deputies are already pointing high-powered weapons at the teens, who have their hands up.

Below, we lay out an investigation into Collins' post and the claim that Los Angeles County sheriff's deputies had indeed held three teenagers at gunpoint after witnesses said the teens themselves were attacked by someone at a bus stop.

What Did The Mother's Video Show?

To begin, we analyzed Collins' Instagram video second-by-second. It was unclear whether she recorded the footage herself or if someone shared the footage with her after the incident. The post's caption read:

How will I help my son recover from this.

I wanted to share what happened to my son yesterday in SCV when he was with a couple of friends sitting at a bus stop headed home. He was attacked by a gentleman (homeless guy) who approached them and first asked them if they had any crack then tried to take their things. The guy became so aggressive that he took his shirt off pulled out a knife and whip them tried to stabbed them. His friends only had their skate boards to cover them from the knife and whip so they held it out to keep distance from this guy. Several bystanders including the restaurant manager of Buffalo Wild wings called the police to get help for the boys but “One” caller called the police and reported two black guys are attacking a homeless guy. This is how the police responded. ... To summarize, Collins said the teens were sitting at a bus stop on Aug. 7, 2020, with their skateboards when a man allegedly approached them and asked if they had any crack cocaine. It's unclear from the Instagram post how the teens responded to the question, but then the man allegedly tried to rob the teenagers, though the post did not provide details about what, exactly, the man tried to steal.

Then, as the encounter escalated, Collins said the man allegedly lunged at the teens with a knife, and they used their skateboards for protection and to separate themselves from the alleged attacker. Witnesses called 911 — at least one of whom, according to Collins, erroneously told officers, "two Black guys are attacking a homeless guy."

From there, according to the video, two deputies drove to the street, got out of a squad vehicle, and pointed firearms in an off-camera direction. Seconds later, at least one other deputy arrived, and he exited his vehicle with what appeared to be a tactical rifle.

Meanwhile, bystanders pleaded with deputies to put away the firearms, and the crowd repeatedly yelled, "It was the other guy!" in reference to the man Collins alleged attacked the teenagers. Additionally, a witness said she told 911 dispatchers, specifically, there was "a crazy man" with a knife chasing three young skateboarders, and that he — not the trio of teenagers — was the problem, per the footage's audio.

We should note here: Snopes requested copies of all 911 dispatch audio related to the incident from both the sheriff's office and attorney Robert Brown, who is representing Collins' family, and we have not heard back. Under the California Public Records Act, 911 emergency calls must be made public unless specific exemptions apply.

By about the 1-minute mark of the Instagram video, the recording had showed three deputies pointing firearms — the rifle and two pistols — in the same off-camera direction. Then, the camera panned to show the area at which deputies were pointing: an area by a bus stop where two Black teens and one white teen were standing with their hands up.

Following deputies' commands, one of the Black teens wearing black shorts and a dark-blue T-shirt at that point dropped to his knees, put his hands behind his head, and allowed a deputy to handcuff him, the footage showed. The deputy escorted that teen in an off-camera direction, while two other deputies continued pointing guns at the bus stop, where the other two teens remained with their arms raised.

Eventually, deputies handcuffed those teens, as well. By about the video's halfway point, deputies in the camera's view had seemingly put down their guns.

One deputy then told the crowd of bystanders that one 911 caller said "someone was hit with a skateboard," and the teenagers were taken into custody because of that report. The remainder of the video recorded the witnesses, including Collins, criticizing the deputies' actions.

After that, the teens were reportedly held in deputies' vehicles for about 30 minutes and then released with no charges, Brown told The Los Angeles Times. They are considering filing a lawsuit over the incident but, as of this writing, no complaint had been filed. How Did The Sheriff's Department's Respond To The Footage?

Next, we contacted the sheriff's department to learn under what circumstances deputies were called to the bus stop and to discuss if, or to what extent, the deputies' actions were appropriate from the agency's perspective and followed department protocol. Deputy Juanita Navarro-Suarez responded to our inquiry with an email that read:

A call of an “assault with a deadly weapon - just occurred” was received by Santa Clarita Sheriff’s Station on Friday, August 7, 2020 at approximately 5 p.m. ...

The informant stated that two male Black adults in their early 20’s, hit a victim (male adult) with a skateboard.  When deputies arrived to the location, they found two males matching the description provided by the caller. The males were detained.

After completing their field investigation, and talking to the parties, no arrests were made. Deputies were unable to locate the possible victim.

In other words, the sheriff's department said deputies went to the bus stop under the impression that two Black men had whacked another man with a skateboard, and that deputies should try to arrest the skateboard-wielding men — despite witnesses' claims in the video that at least one person had, in fact, called 911 because someone had attacked the teenagers. The email made no mention of a knife, though it categorized the 911 call as an "assault with a deadly weapon."

Sheriff Alex Villanueva acknowledged the popularity of Collins' footage in a video statement on Aug. 10, 2020, in which he said he had "concerns" over the deputies' actions and that the encounter was under investigation, without elaborating further. He said:

I've seen the recent video involving a Santa Clarita incident, which has gone viral, and I have concerns regarding the tactics employed. The call for service was received regarding a felony assault, and the deputies detained those allegedly to be involved. The matter is currently being investigated. Roughly three hours later, Chief Dennis Kneer of the department's north patrol division said in a separate video statement that the sheriff launched a review of department policies that govern when, and under what circumstances, deputies should deploy AR-15 rifles, as seen in the video. "We will thoroughly review our actions related to this incident and take appropriate action as necessary," Knee said.

We reviewed the department's policy manual, which is available online, and learned existing rules on AR-15s require deputies to attend a two-day, 16-hour training at which they complete "live fire exercises" that are designed to teach "the basic fundamentals" for using the guns on patrol. The manual stated:

In sum, considering the email from Navarro-Suarez — which confirmed deputies were indeed investigating an assault at the time of the controversial incident — as well as the video footage that showed three deputies pointing guns at teenagers, two of whom were Black, and recorded testimonies from bystanders, we rate this claim "True."

Wigglesworth, Alex.   "Black Teens Who Were Victims Of A Knife Attack Had Guns Drawn On Them By Deputies, Lawyer Says."    Los Angeles Times.   10 August 2020.