Does a Viral Image Show People Lining Up to Surrender Their Pets for Euthanasia?

An animal rescue organization provided a misleading — and inflammatory — description of a group of people waiting outside a Houston animal shelter. 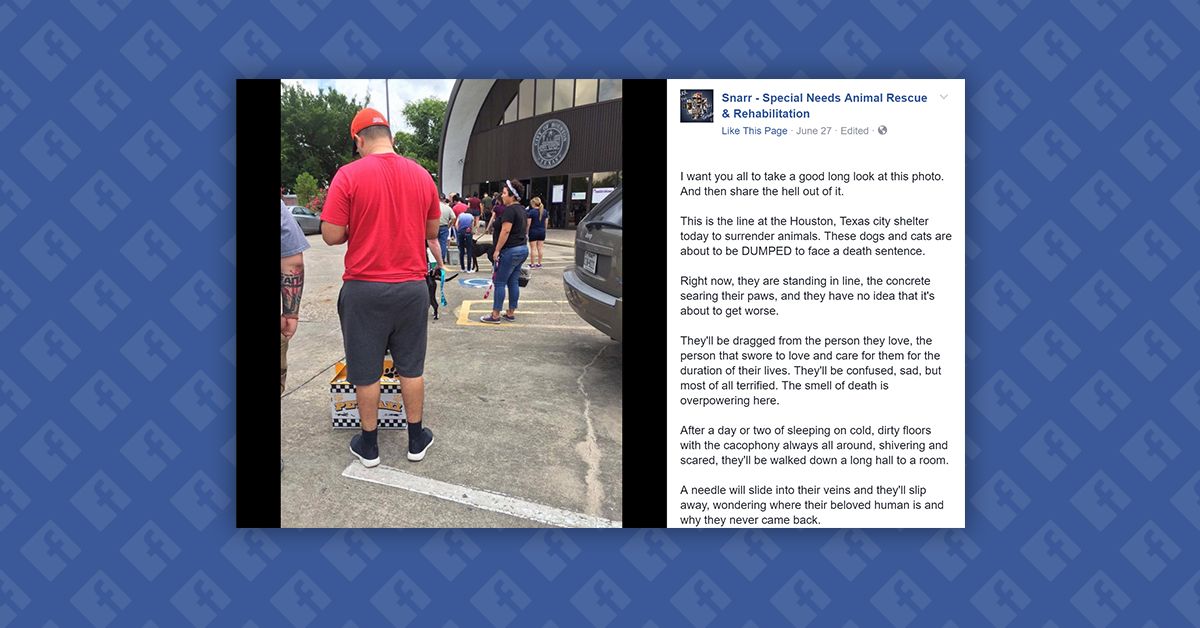 Claim:
A photograph shows people lining up outside a Houston, Texas shelter to turn in unwanted animals to be euthanized.
Rating:

It's statistically likely that around three quarters of those photographed with animals were turning in stray or unwanted animals.

The vast majority of animals turned in to this particular shelter are not put down. Statistically, only around 14% of animals in the photograph were likely to end up being euthanized.

On 27 June 2017, the Facebook page of the "Special Needs Animal Rescue and Rehabilitation" organization (also called SNARR) posted a photo of people with animals lining up outside a Houston, Texas animal shelter, purportedly to surrender the pets and have them put down:

This is the line at the Houston, Texas city shelter today to surrender animals. These dogs and cats are about to be DUMPED to face a death sentence.

SNARR's Facebook post was subsequently picked up by One Green Planet web site, whose article about the topic was headlined: "[What the Hell]!? People are Literally Lining Up to Dump Their Pets Before July 4th Weekend." The Pet Rescue Report got in on the action as well, writing: "Heartbreaking Reality: Owners Line Up at Shelter to Surrender Their Pets Before July 4th Parties."

The Facebook post was removed on 1 July 2017, but had been widely shared, and some commenters began to question the sourcing and veracity of the claim that the owners shown in the photo were all in line to surrender their dogs. Many suggested that the demeanor of some of those in line was not indicative of giving up their dogs, and speculated that it was more likely to be a line for wellness checkups.

Beforing removing it, SNARR had edited its original post, specifying that the two men shown in the immediate foreground of the photo left the line in order to have a wellness check-up for their pet, but still suggesting that all the others (around a dozen in the photo) were there to surrender theirs.

We tracked down one of those men, Juan Martinez of Houston, Texas, whose identity we were able to verify. Martinez told us that he and his brother-in-law (also pictured), had visited the Bureau of Animal Regulation and Care (BARC) animal shelter on Carr Street in Houston on the afternoon of 27 June 2017. We were able to find documents showing that Martinez was there to have his mother's newly-fostered kitten spayed and given deworming treatment.

Contrary to what the group claimed on Facebook, Martinez said everyone waited in the same line, regardless of the purpose of their visit. Although he did not speak to anyone else in line, apart from his brother-in-law, he told us there was a positive atmosphere in the line, and that it was his impression that "nobody was there to drop [their pets] off."

A SNARR spokesperson told us that the organization's treasurer took the photo at around noon on 27 June 2017. The group's treasurer was there to help a friend look for a lost dog. The viral Facebook post was written by SNARR's president, Lauren Connolly.

Soon after the picture in question was taken, the shelter staff came out to ask people the reasoning for their visits (in order to bring in the wellness clinic visitors). The only people who stepped out were the two gentlemen with the cardboard carrier at the back of the line and the member of Snarr's board, which [sic] were then brought to a different entrance. The rest were surrenders - whether it was owner surrenders or stray surrenders (stray being once someone's pet - either that had been lost or that has been abandoned), we do not know.

We asked SNARR how its treasurer found out that all the remaining visitors to the shelter were there to surrender pets. The group's spokesperson said:

Our treasurer did not affirm with each person if they were there to surrender. Conversations overheard in line and with the shelter staff that [sic] led the wellness clinic visitors out of the line and to a different entrance implied that.

After publication of this article, SNARR's treasurer contacted us to make clear that they had not taken the photo with the intention of it being published or used in the way it was. As of 1 July 2017, the treasurer had left SNARR, in response to the episode.

A spokesperson for the Houston shelter explained the queuing system in place at the center. Their explanation contradicts some of the claims made by SNARR. According to BARC, everyone visiting the shelter stays in one line until they come through the front door. At that point they are asked the purpose of their visit, and triaged into three or four separate lines (one for the wellness clinic, one for the foster clinic, one or two to turn in stray or unwanted dogs.) This means that, in theory at least, any given group of people waiting outside the shelter would be there for a variety of reasons.

The spokesperson told us that on 27 June 2017, the center offered the following services: adoptions, intake (stray and unwanted animals), a pet wellness clinic, foster clinic, and spay/neuter clinic. On that day, the shelter saw: 23 adoptions, 33 transfer/rescues (animals given to local rescue partners, who later adopt them out to the public), three lost dogs returned to their owners, seven dogs fostered out. 102 animals were turned in as strays, 52 dogs were surrendered by their owners, and 57 people visited the foster or wellness clinic with pets.

Of the 211 cases where people brought animals to the shelter that day, 27% were visiting the foster or wellness clinic, and 73% were turning in dogs — either strangers presenting lost or stray dogs, or owners surrendering their pets. So it is statistically likely that about three-quarters of any given group waiting in line with animals outside the shelter that day, were turning in stray or unwanted dogs.

So does this mean that all, or even most, of these dogs will be euthanized? No.

They'll be dragged from the person they love, the person that swore to love and care for them for the duration of their lives. They'll be confused, sad, but most of all terrified. The smell of death is overpowering here.

After a day or two of sleeping on cold, dirty floors with the cacophony always all around, shivering and scared, they'll be walked down a long hall to a room.

A needle will slide into their veins and they'll slip away, wondering where their beloved human is and why they never came back. All the while, their human is probably kicking back at the beach for the 4th of July weekend.

Only 52 out of 211 animals (25 percent) brought to the shelter that day were brought by their owners, to be surrendered. Almost twice as many (102) were strays or lost dogs being brought to the shelter. And finally, more than 80 percent of dogs turned in to the BARC shelter — for whatever reason — are not put down.

The shelter's spokesperson provided us statistics showing that in 2016, 80.4 percent of animals turned in (either as strays, lost dogs, or by their owners), were successfully adopted out, returned to their owners or otherwise kept alive.

(There is a sliver of irony in this episode. Juan Martinez, who was in the photo that accompanied Snarr's inflammatory Facebook post, was bringing a fostered kitten to BARC for medical care. That kitten was once a stray, and could well have been turned in to the shelter by someone who once waited in line outside, just like those in the photo.)

The percentage of dogs euthanized was 19.6 percent.

In other words, the statistical likelihood is this: Of the animals waiting outside the BARC clinic at any given moment on 27 June 2017 — the day this viral photo was taken — the vast majority (around 86 percent) were likely not to end up being euthanized.

3 July 2017, 11.16am. Adds the fact that the original Facebook post had been removed, and that the person who took the photo had left their position as treasurer of SNARR.