Were Shell Workers in Pennsylvania Told to Attend a Trump Rally or Lose Pay? 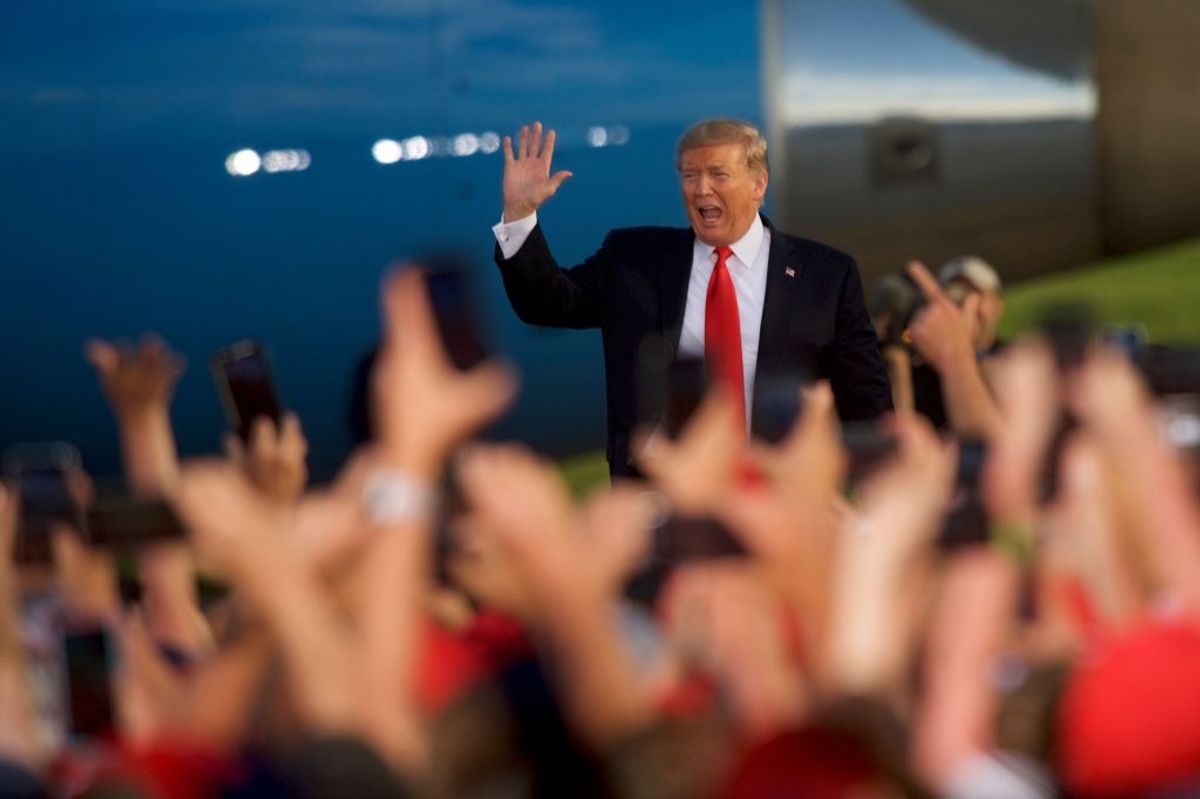 Claim:
In August 2019, workers at the Shell plant in Beaver County, Pennsylvania, were told to either attend a speech by U.S. President Donald Trump or lose pay.
Rating:

Shell workers were told that they could either attend the Trump speech on Aug. 13 and get paid as normal, or stay home and lose a day's pay, the latter of which would have had the effect of causing them to lose overtime pay later in the week.

In August 2019, we received multiple inquiries about the accuracy of news reports that claimed workers at a Shell plant in Western Pennsylvania had been told to attend a rally there by U.S. President Donald Trump, or lose pay.

The website Business Insider published an article with the headline, "Shell Workers in Pennsylvania Say They Were Told to Either Attend a Recent Trump Event, or Not Get Paid," which reported that:

"In addition to the ethical concerns of the speech, which was expected to focus on energy but instead transformed into a full-on campaign rally (despite being funded by taxpayer dollars, which are not supposed to go toward political campaigns), the Pittsburgh Post-Gazette on Friday revealed another red flag: the workers in the crowd didn't attend Trump's event by choice; rather, they had to attend in order to get their paychecks.

"While attendance was not mandatory, union workers who didn't show up had to forfeit their pay, similar to if they had opted to skip work for the day, according to the Post-Gazette."

The website Essence opted for a similar headline and added:

"Employees at a new Shell plant in Pennsylvania say they were forced to attend a recent speech by President Donald Trump in order to get paid, according to a report from the Pittsburg [sic] Post-Gazette. The event, which took place at the new Shell Pennsylvania Petrochemicals Complex in Western Pennsylvania on Tuesday, was filled with employees from the plant. But now many are saying they were told that their pay was contingent on them showing up to the speech."

Similar articles were posted by CNN, the Huffington Post, National Public Radio and Time. Each of them largely or wholly based their reporting on an original story published by the Pittsburgh Post-Gazette on Aug. 16, which stated that:

"The choice for thousands of union workers at Royal Dutch Shell’s petrochemical plant in Beaver County was clear Tuesday: Either stand in a giant hall waiting for President Donald Trump to speak or take the day off with no pay.

"'Your attendance is not mandatory,' said the rules that one contractor relayed to employees, summarizing points from a memo that Shell sent to union leaders a day ahead of the visit to the $6 billion construction site. But only those who showed up at 7 a.m., scanned their ID cards, and prepared to stand for hours — through lunch but without lunch — would be paid. 'NO SCAN, NO PAY,' a supervisor for that contractor wrote."

On Aug. 16, Twitter user @MaureennKelly posted a photograph of what she described as a document that had been distributed among workers at the Shell plant, apparently the same one the Post-Gazette said was itself a summary of a memo originally written by Shell.

This document was handed to workers at the Beaver Co Ethane plant in PA. Going wasn’t mandatory but they would lose overtime pay if they didn’t.
As you can see, workers were paid and bused to the Trump event. pic.twitter.com/LfFj1VwtLd

The document posted on Twitter contained 14 instructions or points of information about Trump's visit on Aug. 13. Of most relevance, the workers were apparently told that: "Your attendance is not mandatory. This will be considered an excused absence. However, those who are NOT in attendance will not receive overtime pay on Friday."

The document also contained instructions about the conduct of workers at the Trump rally: "No yelling, shouting, protesting or anything viewed as resistance will be tolerated at the event."

A spokesperson for Shell emphasized that the company was not responsible for any order for workers not to protest or demonstrate "resistance" but did corroborate the fact that workers would be required to miss out on pay if they chose not to come to the rally. In an email, the spokesperson told Snopes that:

"Tuesday [Aug. 13] was treated as a training (work) day with a guest speaker who happened to be the President. We hold events like this several times a year with various speakers. The morning session (7-10 AM) included safety training and other work-related activities. That said, it was understood some would choose not to attend the Presidential visit and were given the option to take personal time off (PTO) instead. As with any work week, if someone chooses to take PTO, they are not eligible to receive the maximum overtime available."

So the workers were presented with two options in the lead-up to Trump's visit to the plant: Come to work, attend the rally and get paid as normal or; stay at home and take a day off. The Shell spokesperson explained to Snopes that that day would be unpaid and it would also mean the worker in question would lose out on that day's worth of overtime, at the end of the week.

As such, the widely promulgated claim — that Shell workers at the company's Beaver Co. plant were told to attend Trump's rally or lose pay — was accurate. The workers were not exactly "forced" to go to the rally (as some reports claimed), but it has to be noted that a choice in which one option involves losing out on income is not an entirely free choice.

Furthermore, many news reports did not do a good job of informing readers that that set of options (attend and get paid, or stay home and forego pay) was not novel for the Shell plant or unique to Trump's visit in particular — it is standard procedure for any training day, involving any guest speaker.

It should also be noted that the set of instructions that ordered "no protesting" was not produced by Shell itself but rather — according to the Post-Gazette and CNN —  by one particular contractor whose employees work at the plant. It's not clear whether workers attached to any other contractor were given similar instructions.

Finally, some confusion exists in certain reports over whether the day off being offered to workers would be paid or unpaid. CNN and NPR, for example, wrote that the employees had three options, rather than two: attend the event and get paid, take an unpaid day off, or use a day of paid time off.

This element of those reports was not accurate, according to the Shell spokesperson with whom Snopes spoke. The confusion likely arose over the use of the initialism "PTO," which can mean "paid time off" or "personal time off." In this case, the workers were only given the choice of attending the training day (including Trump's speech) or taking an unpaid day off.

Einbinder, Nicole.  "Shell Workers in Pennsylvania Say They Were Told to Either Attend a Recent Trump Event, Or Not Get Paid."   Business Insider.  17 August 2019.

Rogo, Paula.  "Shell Workers in Pennsylvania Say They Were Told Either Attend a Trump Event Or Not Get Paid."   Essence.  17 August 2019.

Papenfuss, Mary.  "Shell Workers Had to Attend Speech to Be Paid, Were Ordered Not to Protest: Report."   The Huffington Post.  17 August 2019.

Litvak, Anya.  "Trump's Large Union Crowd at Shell Was Given the Option of Not Showing Up -- and Not Getting Paid."   The Pittsburgh Post-Gazette.  16 August 2019.